The One and Truly

Leader of the Void

"Make the world of Albion burn" AKA Domination.

Retrieve the Sword of Aeons (succeeded/failed depending upon the player choice).

Jack of Blades is the main antagonist of the Fable video game (including the re-release Fable: The Lost Chapters and the remake Fable: Anniversary), the nemesis of the Heroes' Guild during the events of the story and the being responsible of mostly all the tragic events of the game.

It was revealed by the Tales of Albion that Jack of Blades came from a place called the Void. It is also revealed that he had come with the Queen of Blades and the Knight of Blades, who together were known as the Court. He and the others demanded that the people of Albion bow down before them. When the people refused, the Court "burned Albion until the earth turned black and the sky was thick with smoke". When the people refused a second time, they lifted the sea into the sky and flooded the world. The third time they demanded worship, they claimed that they would bring peace, but again the people refused, so the Court twisted their minds until they went insane. Finally, the inhabitants bowed to the Court. Later in the future, when William Black was consulting a tome, Jack transported William from Albion to the Void. Jack tried to enslave William with an ornate sword, but William managed to fight back and escape, and at the same time managed to steal the sword from Jack, which was later discovered to be the Sword of Aeons.

Their second meeting consisted of yet another battle. William Black managed to break Jack's body, destroying his form for a time. However, Jack's soul was believed to have escaped and possibly took refuge in his mask.

The ages passed, and although William Black was dead, his lineage still had the power of the Archon to wield the mythic Sword of Aeons. Though he doesn't appear directly in the Game until the Arena, he is the main cause of the majority of events in the early game. He was the one who led an army of bandits to Oakvale, burning down the entire village in order to locate the boy who will become the Hero. Only that boy and a few more people escaped from Jack, while the rest were kidnapped or killed. While the mother and sister of the Hero, Scarlet and Theresa, were kidnapped for an interrogation, his father, Brom, died at the hands of Jack.

After burning Oakvale, Jack asked his prisoners (Scarlet and Theressa) where their son was. First he asked to Theressa, but she didn't answer him, only responding with a glare. Jack maliciously tore out Theressa's eyes and left her for dead in the middle of a field. He didn't care about losing one potential source of information since he had Scarlet, too. He decided to lock her in Bargate Prison for safekeeping.

Meanwhile, one of his servants, Maze, found the boy, but instead of giving him to Jack, he brought him to the Hero's Guild. Maze was a powerful member of the Guild already, but he was a slave of Jack, too, and he wished to destroy him in order to be free.

Jack finally shows himself at the Arena of Witchwood. The Arena sets the Hero fighting various creatures from all over Albion, alongside with his companion and friend, Whisper. After defeating Arachanox, Jack, as an honored guest, proposes (orders, in actuality) a final round between the two best champions. The winner will receive a special prize while the other will die. At this point,the player can decide two options: kill Whisper in order to receive the special prize and evil alignment or spare Whisper's life. After the final round, the Hero will notice a statue of his mother in the Room of Heroes. Jack appears near the statue and will talk about Scarlet, trying to trick the Hero. Before finishing his conversation with the Hero, Jack will give to him the Champion Seal.

Scarlet Robe and the Key

The Hero tries to infiltrate in Bargate Prision next, but Jack already knew he was coming, because the Champion Seal was magically revealing the position of the Hero all the time. Jack locks up the Hero and Scarlet in Bargate, where they were both tortured by the guards month after month, until the day the Hero finally escapes the prison and leads his mother and the other prisoners (if they don't die first) to freedom. Scarlet returned to the Hero's Guild and helped her son learn how to activate a portal to Hook Coast, which has been infested with ghosts and other vile creatures. There, the Hero finds Maze, who captured Theressa. Maze tries to deceive the Hero, lying cowardly to him, but suddenly, Jack (who has kidnapped Scarlet Robe, too, during these events) appears behind the Hero and use magic to weak him and imprison him. Maze, who truly was a servant of Jack all this time, was using Theressa's blood to obtain the Key, a mystical object and Jack's most powerful weapon. After Maze completes the ritual, Theressa is teleported to the Chamber of Fate, but before she is finally teleported, she releases the Hero to confront Maze. After he kills the mage, Maze shows remorse for serving Jack and makes a last effort to reveal Jack's plan of using the key to activate the Focal Sites before dying.

The Focal Sites and the Chamber of Fate

The Ancient Focal Sites, if they are activated, will unlock the Chamber of Fate, a secret chamber in the Hero's Guild created by William Black in order to hide the Sword of Aeons. The Hero runs to Witchwood, where the first Focal Side is, in order to stop Jack, but he has already activated it, mocking the Hero by telling him that he saved him the trouble of killing Maze himself because he was useless now anyway. The Hero goes to Greatwood to deactivate the Focal Sites, again a futile effort. Jack activates the two missing Focal Sites, and goes to the Hero's Guild, killing everyone in there (except the Guild Master). The Hero, who is chasing Jack, arrives in time at the Chamber, and there, Jack slits Scarlet's throat in front of her son, the blood flowing awakening the Sword of Aeons. Jack tries to use the sword against the Hero and Theressa, summoning minions and hiding behind a barrier, eventually fighting the Hero one-on-one and even growing to massive size to attack with blasts of magic. After a long battle, Jack is defeated and his dead body becomes a portal to the Void. At this point, the Hero could throw the Sword of Aeons into the portal and destroy it forever, or kill his own sister, Theressa, who still remains in the Chamber, and with her blood empower the Sword. However, in both decisions, Jack is still alive, locked in the Void until the day he returns. 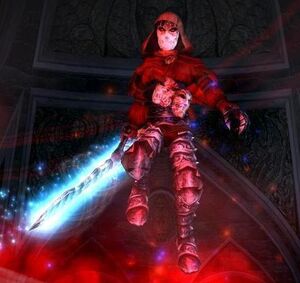 Jack of Blades in the original Fable 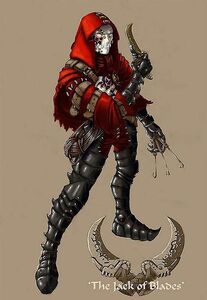 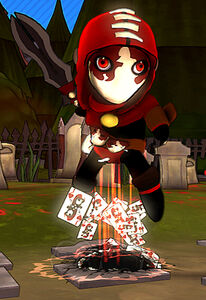 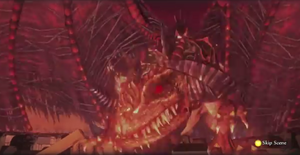 Jack of Blades in his Dragon Form 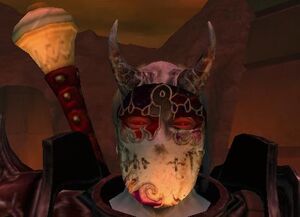 The Hero of Oakvale possessed by Jack of Blades.

Jack of Blades in Fable:Anniversary 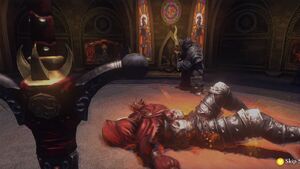 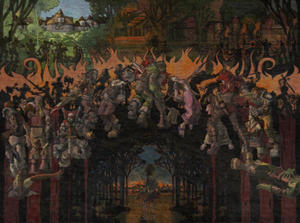 Retrieved from "https://villains.fandom.com/wiki/Jack_of_Blades?oldid=3549061"
Community content is available under CC-BY-SA unless otherwise noted.