The Jack of Spades is a part of the Royal Flush Gang, and has been borne by more people than any other name in the gang. After the first Jack struck out on his own as Hi-Jack, the King of Spades found a replacement Jack. Hi-Jack later returned, and is the only member of the original gang still alive. However, Batman got involved and the gang overpowered him the first time.

Paxton hired the Royal Flush Gang to steal art from him, including the Jaguar of the Dezer but that robbery was broken up by Batman. King kidnapped Paxton and held him for ransom which failed and Bruce Wayne decided to incriminate Paxton by taking advantage of the situation. Paxton bargained with his captors to kill Wayne, however Batman defeated the group and turned Paxton over to Commissioner Barbara Gordon. Paxton was then convicted and forced to resign which led to Bruce Wayne taking back control of the company and Powers Technology.

Jack was one of four individuals selected by Ace of the earlier Royal Flush Gang who was given powers by her to become her playmates as the hour of her death drew nearer. However, Jack used his powers to confront the Justice League until he was beaten by them.

Jack - or "Kabuki Jack" as he was called in the script - was based on the cartoon character Samurai Jack. His civilian appearance was modeled after the voice actor of Samurai Jack, DCAU veteran Phil LaMarr.

Jack of Spades in Arrow 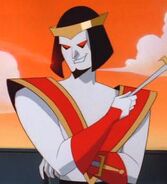 Jack of Spades in Batman Beyond 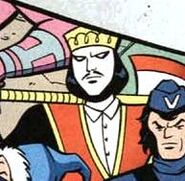 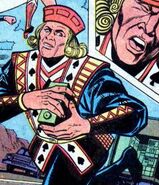 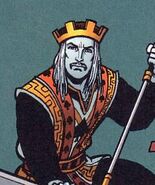 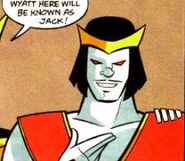