The Ripper
Jack the Lad
Demon (by Arthur Weaversbrook)
Mr. Jack (by his men)
Monster (by Jacob and Evie Frye)

Member of the Assassins (formerly)

Catching some "bad people" into his own Prison and letting his Chief Warder hold them.

Destroy the old creed by killing all the Assassins and begin a new creed of assassins from their ashes (failed).
Using Deptford prison hulks to place his prisoners and starved and tortured until they wrote the Ripper's demands to their families (succeeded for a while, later failed).
Kill Dr. Archer and nurse Whitney for their abuse.
Prevent his identity from being identified (both succeeded).
Kill Jacob Frye for his mother's death.
Kill Evie Frye to prevent his action being destroyed (both failed).

Jack the Ripper is the titular main antagonist and protagonist of the DLC for the 2015 videogame, Assassins Creed: Syndicate - Jack The Ripper. Like the real Jack the Ripper, he was a serial killer terrorizing London in 1888, killing five prostitutes. In the DLC he is depicted as a rogue Assassin and former apprentice of Jacob Frye, before plotting to form a new Creed by usurping his former mentor's control over the Rooks.

He was voiced by Alec Newman, who also voiced Oybek Nabazov in Hitman, and Lahabrea in Fantasy XIV.

When Jack was a child, his mother, an Assassin was killed by Templars during Crawford Starrick's reign over London. Jack was so traumatized by this that he was placed in the Lambeth Asylum, where the ill-treatment given to him by Dr. Archer and his nurse aggravated his mental instability. After the death of Starrick in 1868, Jack was freed of the Asylum by Jacob Frye, and became one of his new initiates.

In 1870, he traveled with Jacob and the other initiates to India, and went to learn from the Indian Brotherhood with Evie and Jacob in order to learn their ways, such as the use of spikes and fear bombs, using fear based tactics of his attacks Upon returning to London, Jack begun to develop an extremist view of the Assassins' mission, and his sanity rapidly slipped away. He also grew to blame the Assassin's, Jacob particularly, for failing to save his mother, making him a personal target.

Eventually, Jack usurped control of the Rooks from Jacob, and begun killing all those sent against him. Radicalizing his followers, Whitechapel - the centre of Jack's operations, descended into an area of crime and villainy. Jack set out to start his own Creed to usurp the Assassins all together. His crimes have created an aura of panic across the city and he has murdered prostitutes who where Assassin's agents.

In the games opening, after his latest killing, he stalks Jacob Frye down to his house, killing a few police officers in his way. He corners Jacob before maiming and kidnapping him, despite Jacob's attempt to reason with him. Jacob's sister, Evie, is summoned from India by Frederick Aberline following Jacob's disappearance. It turns out Jack has Lady Owlyn Owers under his thumb, using her to spread his manipulations and influence over the city. Jack also has Owers ran several brothels in order to learn secrets of her customers and blackmail them. Owers is soon assassinated by Evie at her mansion once she returned to London upon her brother's request to stop Jack.

Jack has also taken to mass kidnapping, having his men take hostages, including prostitutes to blackmail their loved ones into doing what they want. Jack has his hostages imprisoned on barges and uses his men as guards, having them torture and sometimes kill his hostages. Evie finds these barges and frees the hostages, killing his "warden" and has multiple Scotland Yard officers arrive on the scene. Jack destroys the evidence and kills all the officers, and even his own men to silence the witnesses.

Shortly after this, Jack returns to Lambeth Asylum, killing it's guards, doctors and nurses before letting the inmates loose, and having his men take over the Asylum. He sends Evie a message to confront him at the Asylum before having her dosed with a drug causing her to hallucinate civilians as Jack the Ripper himself, causing Evie to attack them before it wears off. Evie heads to the Asylum where she confronts Jack. A fight ensues and eventually sets the inmates loose to use as cannon fodder, goading Evie to let out her inner monster. Evie gains the upperhand and brutally kills Jack in a final attack. Dying, Jack told Evie that they were the same, but she responded that they were not and left.

Evie sets Jacob free and tells Aberline not to reveal Jack's true identity, or even the fact that he had been killed. This was, in part, to protect the Assassins from discovery, and a public backlash. 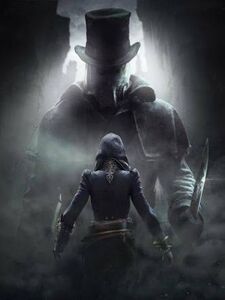 Jack the Ripper overlooking a fight. 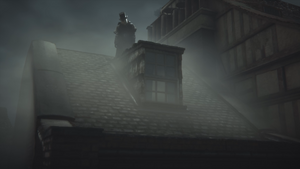 Jack on a rooftop, stalking Evie. 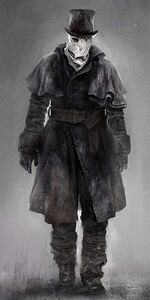 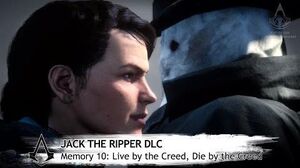