To become a Kishin (failed)

Jack the Ripper is a minor antagonist in Soul Eater. He was the first villain that both Maka and Soul encountered. He was eventually killed off by Maka and Soul.

Jack the Ripper is probably one of the least human-looking evil humans in the series. His build is more monster-like, with an elongated body with disproportionately long skinny arms and legs and a strangely profound pot-belly. He walks and stands in a crouched position, similar to a predatory animal and has a line of small bumps in his skin going down his spine. He has grey skin and wears a strange-looking outfit similar to a bondage outfit, made up of a few scant straps going across his torso and waist. On the strap around his waist, a black jagged shadow-like plume is attached to either side of his waist. His face is obscured by a mask that looks like it is stitched onto his face, with a pointed conical orange nose, dark angry-looking eyeholes (with one eye narrower than the other) and a wide mouth with razor sharp teeth and a long drooling tongue. The ends of his mouth has stitches on them. In the anime, it is shown that his eyes glow red at some intervals. He has a strange-looking symbol on his forehead. He has a tuft of wild black hair on each side of his head as well as a long lock of hair hanging down on both sides of his face.

The most prominent features of Jack the Ripper are his hands; they seem to be completely replaced by mechanical claw-like appendages. Each metal hand has five long razor-sharp blades that he uses as his primary weapon. These metal hands are attached to thin metal bars that run along his arms and connect to a metal ring around his neck. 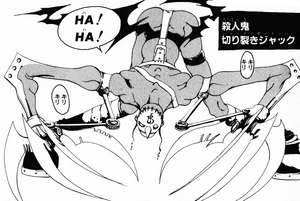 Jack the Ripper in the manga.
Add a photo to this gallery

Retrieved from "https://villains.fandom.com/wiki/Jack_the_Ripper_(Soul_Eater)?oldid=3129629"
Community content is available under CC-BY-SA unless otherwise noted.