Jackal (Fist of the North Star)

Head of the Warriors

Jackal (in Japanese: ジャッカル, Jakkaru) is the main antagonist of an arc in the Fist of the North Star series. A convict before the apocalypse, he leads a bandit biker gang called the Warriors in the anime.

Jackal is first introduced as a bar patron who kills one of his men to prevent him from attacking Kenshiro, explaining his philosophy of not picking fights with people you can't beat. here Jackal learns about quantities of water owned by the orphan caretaker Toyo. Jackal watches the orphan Taki and orphan matron Auntie Toyo's village for his gang to reach the village and steal the water.  When Taki tries to steal water from a well owned by Jackal against the advice of Toyo, he is shot and killed by Jackal's henchman, Shark.

When Kenshiro leaves, Jackal begins the raid and prepares to use the village and well as a base. Although a rifle equipped Toyo shoots Jackal's face, he shows resistance and threatens to blow up everyone around her if she does not comply. Jackal stabs Toyo, fatally wounding her. Figuring she has time left before she dies, Jackal decides to hang the orphans one by one in front of her.

When Kenshiro arrives to save the village he manages to save all but one of the orphans from being hung, Jackal then sends his boxer Scorpio out only for Kenshiro to easily defeat him and threaten Jackal. However Jackal's loyal right hand man, Fox, reveals himself to have orphans with dynamites tied to their backs, saying if Jackal dies, he'll kill the orphans. Due to this Kenshiro is forced to release Jackal, who lights the dynamite away before riding away with the Warriors. Kenshiro barely saves the orphans, but Toyo dies of her wounds.

Later on, Jackal is informed by one of his men that Kenshiro will be coming to kill him as revenge for Toyo and the dead orphans, before the goon is killed via Hokuto Shinken. One of the gang members says Fox, Jackal's right hand should be alerted about Kenshiro as he is in a nearby village. Jackal says his right hand is right here, touching his real hand and abandons Fox to die so as to buy time for him to escape.

On his way to Villainy Prison, where he was once held, Jackal finds his usual bartender is rejecting giving him free water, as the bartender received the lifeless body of Jackal's top goon, Fox within the bar. Angry, Jackal kills the bartender and kicks Fox's body. Worried for their lives and sick of Jackal's mistreatment, Jackal's remaining henchman gang tries to kill him hoping to appeal to the Hokuto Shinken user. However, Jackal cuts down his attackers, then kills the rest by blowing up the whole bar with dynamite, escaping to Villainy Prison to pull off a plan of his own.

It is here that Jackal planned to released a fearsome convict; Devil Rebirth, the demonic user of Rakan Nioken who had killed 700 lives with one use of his forbidden technique, he had been tried for execution him 13 times but survived all so the demon was sentenced to five hundred years in jail. After freeing the demon, Jackal convinces Devil he is his long lost brother using a stolen picture of the demon's mother. Kenshiro follows afterword, and eventually defeats the monster. Held in place by Devil Rebirth, he tries to get Kenshiro to free him, but Kenshiro lights the villain's own dynamite and blows him and Devil Rebirth up.

In the anime, he is a lackey of Shin and receives his instructions from Shin's top henchman Joker.

In comparison to his devious depiction in the manga, the anime version of Jackal is more incompetent and comical. The scenes in which Jackal and his gang manhandle children are toned down, unlike the manga, no children are killed in the anime adaptation. Jackal's reasoning for leaving Fox in this adaptation is instead the belief that Fox may stand a chance of defeating Kenshiro. The idea to trick Devil Rebirth into joining his side is instead thought up by Joker in this adaptation.

Jackal simply cameos as a dimwitted henchman of Jagi who when coming in to inform Jagi that his meal is ready, accidentally witnesses Jagi's helmet less face and its horrible disfigurement. Angered by this, Jagi kills Jackal even after he begs for forgiveness.

This incarnation of Jackal displays none of the skill or cleverness of the other versions of the character, essentially filling in the role of a nameless fat Outlaw from the manga.

Jackal mainly uses switchblades hidden in his wrists and an endless supply dynamites to take care of his enemies. He will avoid fights with people he can't win against. In the anime, Jackal calls his fighting style Nanto Bakusatsu Ken, though Kenshiro suspects it isn't a real martial art.

While below the likes of most martial artists in the series, Jackal is still above the average human, having above average strength and speed. Jackal is able to survive a bullet to the side of his forehead and easily chops a prison guard in half with a single swing from his blade. 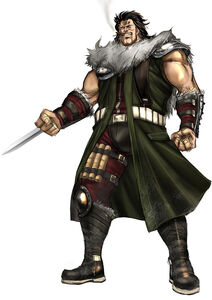 Jackal in Fist of the North Star: Ken's Rage 2'.