Various cybernetic enhancements
The powers of Anubis (has since been removed)

Jackal is the twin brother of Hyena and a member of the Pack, a frequent villain in the animated series Gargoyles and perhaps one of the clan's more outright psychopathic enemies.

He was voiced by Matt Frewer, who had also voiced Panic in Disney's Hercules (both in the movie and the animated series), Chaos in Disney's Aladdin, The Leader in The Incredible Hulk animated series, as well as playing Moloch the Magician in Watchmen.

Jackal was born in 1968 in Canada, alongside his younger fraternal twin sister, Hyena. According to Hyena, whenever she meet a man she liked her, Jackal would always get involved and ruin her latest relationship. Before being recruited into the Pack by Fox (by orders of David Xanatos), he and his sister worked as mercenaries.

Thrill of the Hunt

Jackal, Hyena, Fox, Dingo and Wolf were the stars of the titular The Pack television series, which garnered them fame from several admirers and a daily salary of half a million dollars. Together with his sister, Jackal and Hyena were the practical jokers of the team, as demonstrated when they teased Wolf over his displeasure of not having any real challenge to fight. In return Wolf named them "jokers" and even tossed two dumbbells their way.

The Pack was informed of the existence of gargoyles in New York by an anonymous envelope, but Jackal was skeptical of these claims. After a live performance in Madison Square Garden, The Pack is approached by Lexington, on of the Manhattan gargoyles and an admirer who was hoping to befriend The Pack.

Instead, Fox and Wolf tricked the gargoyle to bring his friends along, but Lexington could only bring Goliath after some intense coaxing. The pack laid a trap for Lexington and Goliath at their own studio, forcing the two gargoyles to escape on the city's rooftops, until they are brought down by Jackal, who had them electrocuted. The Pack go after the gargoyles in an alleyway where they are greeted by a family, Wolf convinced them to leave after pretending that the gargoyles were monsters sent by their enemies.

Goliath knocks Hyena and Jackal aside with a stream of water from a local fire-hydrant, then escapes with Lexington on the roof of a building. The Pack soon follows them, but are unable to find the gargoyles among the several other grotesque statues conveniently placed on the roof. Goliath and Lexington take advantage of the situation by pulling each member of The Pack aside, starting with Hyena and Dingo.

Jackal gets scarred and abandons his teammates, only to be jumped by Goliath. Wolf and Fox are later defeated and sent to prison after holding a swimsuit model hostage.

Jackal and Hyena make a reappearance, now hired by the incarcerated Fox to steal the Coyote's Diamond, held at a diamond exchange. Hyena would much rather break the glass and cut a path through the crowd, but Jackal wants the job done with fines. When Xanatos purchases the diamond, Hyena looses her cool and begins attacking the crowd, soon followed by her brother, who kicked Xanatos aside and grabbed the diamond away.

The two make their escape on the roof, with the intention of paragliding to safety. They are interrupted by the arrival of a police helicopter piloted by Derek Maza, and carrying Derek's sister, Elisa, also the Manhattan Clan's confidant. Jackal shoots the helicopter's tail off with a bazooka, but Derek successfully manages to land the chopper mostly unscathed. Jackal is then tackled by Xanatos, who manages to get his diamond back. The twins are forced to make their escape after Elisa pulls a gun at them. Later that night, Jackal informs his sister that they have been hired to assassinate Xanatos as retaliation for interfering in the diamond theft.

Just as Xanatos and his newly commissioned pilot, Derek Maza, are leaving the Eyrie Building in Xanatos' personal helicopter, Jackal and Hyena go after them in their own personalized chopper: Jackal pilots while Hyena mans the gun. Hyena is just about to fire the finishing shot until the chopper is assaulted by Broadway.

Lexington opens the cockpit and tosses Jackal out, Brooklyn does the same with Hyena, but the two parachute themselves to safety. The twins make one final attempt at Xanatos' life, this time at his personal retreat, the forest house named Xanadu. Under the cover of night, Jackal and Hyena ambush Xanatos and Derek, but they are foiled by the arrival of Lexington, Broadway and Brooklyn on board The Pack's commandeered helicopter which Lexington had upgraded. Jackal and Hyena are then after arrested by Elisa and sent to Riker's Isle prison. Unknown to the twins, Elisa had been tipped of by non other Fox, in tun ordered to do so by Xanatos in order to further test Jackal and Hyena's abilities.

Leader of the Pack

At Riker's Isle, Jackal shares a cell with Wolf, while Hyena is in the same cell with Fox. The prison is raided by Dingo alongside newcomer Coyote, who break Jackal, Wolf and Hyena out and escape on board a hoover-craft. Coyote announces himself as The Pack's new leader and cements his claim after besting Wolf in combat, leaving him unconscious with the use of knock-out gas.

Hyena finds Coyote attractive and Jackal is left impressed, but curious as to Coyote's true identity. Coyote removes his helmet, revealing his exact resemblance to David Xanatos, to which Jackal takes offence to since it he blamed Xanatos for his imprisonment. However, Coyote soon wins him over, along with the rest of The Pack, after convincing them that the Manhattan Clan was their true enemy. Under Coyote's leadership, The Pack successfully capture Brooklyn, Bronx and Lexington during an ambush at their old television studio.

The gargoyles are kept hostage on board an oil tanker, where their clansmen soon arrive, release them and engage The Pack in a heated fight, with Hudson taking on Wolf, Hyena and Jackal all at once. After Coyote is revealed to have been a robot, Jackal and the other male Pack members are left stunned, but soon make their escape after the oil tanker is set ablaze.

After their last defeat The Pack have been reduced to robbing banks, an activity that both Jackal and Hyena find very appealing. Once again they are forced to fight the Manhattan Clan, who had shown up to stop the robbery. Jackal nearly beats Lexington but he is subdued by Broadway, who pummels Jackal and leaves him with three large scars across his chest. Dingo manages to end the fight after he electrocuted Goliath, giving The Pack an open-window to escape with what little money he could bring along.

Just as they are flying above the city, The Pack is visited Coyote, now a floating head, that offers to help The Pack defeat the gargoyles. Jackal and Wolf initially dismiss the robot, but Hyena and Dingo want to hear Coyote's proposition. Coyote offers to have the Pack augmented by means of either genetic engineering, cybernetic implants or mechanical battle armor. Jackal agrees with the offer so long as it meant getting an opportunity for revenge. Nevertheless he is also curious as to why Xanatos couldn't have come in person to make them the offer.

One month later, The Pack lure the gargoyles(Goliath, Hudson and Bronx, plus Elisa) into an ambush where Jackal and Hyena, after having been transformed into cyborgs, proved themselves more then a match against Bronx and Elisa Maza, respectively. The leadership, according to The Pack's agreement, fell onto whoever one of them caught the biggest gargoyle, that being Coyote 2.0 who had brought down Goliath.

At first Jackal dismissed Coyote's claim in disgust to his sister's attraction towards it and instead wanted Wolf to be the leader, but Dingo out-voted him in favor of the robot. At The Pack's new hideout, inside a train depository, Jackal and Hyena wait patiently, playing cards and waiting on Coyote to release Bronx so he could lead them back to the Manhattan clan's hideout, where they would destroy the gargoyles during their stone sleep.

Once again, Fox indirectly helps the gargoyles, having revealed to Brooklyn, Broadway and Lexington where The Pack where hiding. Under Brooklyn's instructions the trio devised a plan to free their clansmen: Brooklyn lured Wolf and Jackal outside, while Lexington releases the prisoners. A fight ensues, with Jackal being defeated by Brooklyn. After Coyote had been destroyed the rest of The Pack are left behind in chains, where they are soon arrested by the police.

Several months later, Jackal, along with Hyena, Wolf and the new Coyote 3.0 all fled to Egypt with help from Xanatos, who employed them there to help the Emir in summoning Anubis for the purpose of obtaining the power of immortality. Jackal was intrigued by Anubis' jackal-head as well as the Egyptian god's power over death, referring to him as "the original model". The ritual is interrupted at first interrupted by Goliath, Bronx, Elisa and new member Angela, but The Pack defeat them quickly and chain them to the walls.

The Emir orders The Pack to leave him alone while he secures immortality, but Jackal offered to spy on the Emir with the pretense of making sure that he holds on to his end of the bargain, to which Coyote excepts. The Emir orders the god of death to revive his son, who had died during childhood, but Anubis insists that immortality, and more importantly, resurrection are an impossibility. This causes the Emir to resort to drastic measures, he uses a magic spell from The Scroll of Thoth that would make him possess Anubis, becoming an avatar with all the god's powers.

Hearing this, Jackal pushed the Emir aside just as Anubis was about to enter his body, so instead Jackal ended up possessing the god. He first used his powers to destroy Coyote, turning the robot into a rusted pile of metal, transformed his sister and Wolf into infants, and then Goliath and friends into elderly people.

Jackal decides to kill the Emir last, finding his ravings to be amusing. When he became the avatar of Anubis, Jackal went insane with power and decided to destroy all life on the planet. However, he was foiled by the Emir, who used the Scroll of Thoth to become Anubis' avatar in Jackal's place. The Emir finally realized that the dead could not be brought back to life, so instead he returned Goliath and his friends' youth and turned Hyena and Wolf back to adulthood. He then had the ritual chamber destroyed so no one could ever again attempt to capture the god.

After that, Jackal and Hyena parted ways with the Pack, and went to Guatemala, where they worked for Preston Vogel to destroy the Mayan gargoyles. Jackal sent Hyena to destroy the Mayan Sun Amulet to render the gargoyles vulnerable while he planned to attack them in their stone sleep. Hyena was thwarted by Lexington and Broadway, and Jackal was subsequently routed by the Mayan gargoyles and Bronx. In 1997, Jackal freed Hyena and Wolf from prison and they wreaked havoc on Times Square. 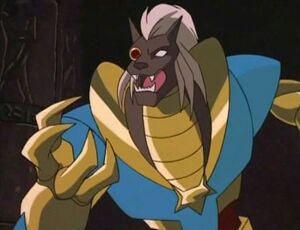