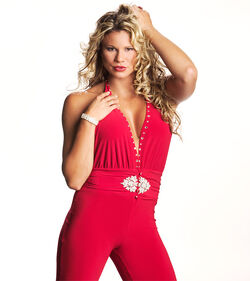 Jackie Gayda is a professional wrestler and valet best known for her time in WWE and TNA.

Jackie started as a contestant on the second season of WWE's Tough Enough program, which she won along with her fellow cast mate, Linda Miles. Both women were at odds with their villainous trainer, Ivory, which led to Linda and Ivory facing each other in a one-on-one match on Velocity, with Jackie in Linda's corner. At the end of the match, Jackie turned villainous and pushed Linda off the top rope, allowing Ivory to defeat her. In the weeks following her heel turn, the evil Jackie feuded with Linda; mainly due to not wanting to share the spotlight with her fellow Tough Enough co-winner.

In 2003, Jackie resurfaced as the villainous manager to Rico, who was a member of the heel faction known as 3 Minute Warning. Jackie's stint as a villainess ended in early 2004.

As suggested in her betrayal against Linda Miles, Jackie is not only an opportunist, she was portrayed as wanting all of the attention as a villainess.

Add a photo to this gallery
Retrieved from "https://villains.fandom.com/wiki/Jackie_Gayda?oldid=2468919"
Community content is available under CC-BY-SA unless otherwise noted.