Superjail Inmate (on and off)

Jackknife is a major antagonist in the 2007 American adult-animated series Superjail!.

He was voiced by the series' creator Kristy Karacas, though he never actually speaks a word of English, communicating only through grunts and screams.

Jackknife appears to have gotten his criminal ways from his father who is also shown to have had a total disrespect for others' lives. This included his own son's happiness which was displayed in the form of him selling his toys in order to get booze. The recollection of this memory causes Jackknife so much pain that he sobs at the thought, and pushes a boy away from his toys so he can play with them.

In the show's present Jackknife is a low-level criminal who appears in the openings of most episodes committing crimes before getting captured and beaten up by Jailbot, where his subsequent journey back to Superjail makes up the opening credits sequence. He is often seen escaping the jail during the murder sequences in the first season and periodically throughout the next two seasons. He never speaks and communicates only by way of animalistic grunts and shrieks.

Jared has labeled him to be Superjail's most vile inmate due to his upbringing and near lack of any form of morality. In the episode Oedipus Mess, Jackknife is revealed to have fathered a son with one of Ultra-Prison's inmates. Having recognized the child as his, Jackknife escaped while the Warden created 10,000 clones of Jackknife that run amok worldwide until all but the original are killed off.

Jackknife is depicted as a violent, greedy, short-tempered and misogynistic low-level criminal and pervert with a lack of apparent morals, judgment and sophistication. His various poorly planned criminal activities are seen at the beginning of each episode and inevitably end up drawing Jailbot's attention and getting Jackknife severely beaten and hauled back to Superjail.

Despite this however, Jackknife has still been able to not only survive all of the riots and massive chaotic events that happen in Superjail but also escape several times with ease whereas only a handful of other inmates have been able to do this, showing that Jackknife is a gifted criminal.

Although his criminal nature is generally a constant, in the episode "Oedipus Mess", the Doctor states that he has "a microscopic quotient of selfless love". This is later showcased when, in the same episode, Jackknife presumably crafted a hanging mobile for his genetic son and taught him to tunnel through walls.

Jailbot disguising himself as a corpse to arrest Jackknife. 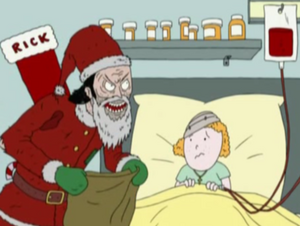 Jackknife stealing from hospital children while dressed as Santa Clause. 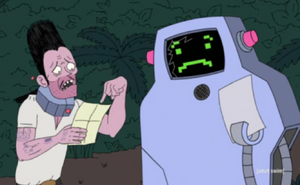 Jackknife stranded on an island with Jailbot.