Jackle is a first-level Nightmaren created by Wizeman the Wicked. and an antagonist in NiGHTS: Into Dreams.

Most noted for the funny look in his weird blue eyes, that toothy grin and those maniacal cackles we call laughter. Jackle is similar in physical appearance to NiGHTS, but he is a maniacal caped jester that is twice his size and wearing a different color scheme (whites, red, oranges, yellows and light blues). His hat curls forward and inward over his head rather than backward and outward like NiGHTS/Reala's hats and he wears a large cape which makes him invulnerable. Finally, only his clothing (shoes, gloves, cape and hat), eyes and teeth are visible. However, whether this is due to his body being invisible or due to a complete lack of a physical body is debatable.

Jackle is the boss of Claris Sinclair's Soft Museum dream. His arena consists of a gigantic playroom filled with oversized toys and instruments of torture in bright primary colors. The entire room is encased in red drapes reminicent of a circus tent and is littered with toy blocks and blue and green dolls with crazed looks on their faces. Two notable items in his boss room are a gigantic purple and yellow star-print jack-in-the-box and an oversized red and yellow guillotine.

Jackle fights by throwing razor-sharp tarot cards that slow you down on impact. You need to remove his cape to make him vulnerable by evading his projectiles and dashing into him. Once he is lost his cape, he will no longer attack you and you're free to attack him for damage. Immediately, he will make a beeline for the safety of his cape again, so try and stand between them when attacking to halt his progress.

In order to score a 2.0, the player must have at least 105 seconds remaining. 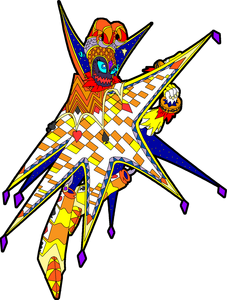 Jackle in his mystical and nightmarish appearance. 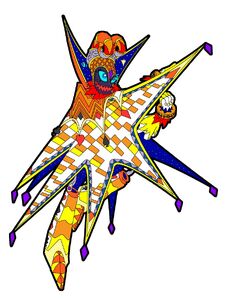 Jackle in his colorful and nightmarish costume.
Add a photo to this gallery

Retrieved from "https://villains.fandom.com/wiki/Jackle?oldid=3327620"
Community content is available under CC-BY-SA unless otherwise noted.