NOTE: This article is about the incarnation of the first Shocker from the Marvel Cinematic film series. The mainstream version can be found here: Shocker (Marvel).

Making profits through Toomes' criminal organization (succeeded for a while).

Amuse himself by firing out weapons and fighting Spiderman (failed).

Jackson W. Brice, also known as the Shocker, is a supporting antagonist in the 2017 Marvel film Spider-Man: Homecoming.

He was a member of Adrian Toomes' criminal organization, but does not really care enough to follow Toomes' orders. After failing once more and putting their operation in jeopardy, Toomes expels Brice from the group. However, when Brice implies that he might reveal to Toomes' family what Toomes is really up to, Toomes inadvertently kills him in retaliation.

He was portrayed by Logan Marshall-Green.

Brice was part of Toomes Salvage Company. The company took cleaning up after major superhero battles. After the Chitauri invaded New York and were beaten back by the Avengers, the company were employed to clean up the mess. The day work started, Brice did not turn up the entire morning and only arrived in the afternoon. When Toomes sarcastically congratulated him for turning up after all, Brice gave the excuse that his alarm clock did not work.

After the Department of Damage Control took over the cleanup jobs, basically costing Toomes and all his associates their jobs, Brice joined Toomes who decided that they would use the already salvaged Chitauri tech to create futuristic weaponry. Toomes, Brice and others turned to a life of crime, selling the weapons to low-life criminals.

Eight years later, Toomes and his gang are still in business. During a demonstration for Aaron Davis, a possible customer, he and Herman Schultz demonstrate a weapon to him that is made from Ultron parts. While Brice demonstrates the gun, firing it at objects around them and thus drawing the attention of Spider-Man, Davis tells them that he only wants some small device. After showing Davis weaponry like Black Hole Grenades, he eventually arrives at Anti-Gravity-Climbers which Davis seems to like. The group is suddenly alerted by a noise and, not knowing that it is actually Peter Parker's cellphone, Brice and Schultz draw their guns at Davis because they believe he set them up.

Spider-Man swings in to save Davis, taunting them and daring them to shoot him instead. While Schultz immediately fires at Spider-Man, Brice puts on the Shocker-gauntlets and smashes Spider-Man away when he approaches him. Delighted by the powers of his new weapon, Brice laughs. He and Schultz then jump into their van and drive off but are pursued by Peter who has attached a web to the van. To get rid of Peter, Brice fires another weapon at him. However, he seems not to be in full control of the weapon and only hits the area surrounding them, not Peter. He even accidentally drops a weapon which falls out of the van and lands on the side of the road. Realizing that Brice is not able to get the situation under control, Schultz calls Toomes and asks for help.

Clad in his Vulture exosuit, Toomes sweeps in and grabs Peter and flies off with him. This allows Brice and Schultz to return to their hideout. However, while Brice is pumped up by the action and takes extreme delight in it, Toomes is outraged as Brice's recklessness almost got the entire team caught. He then chides Brice for ignoring his orders and firing Chitauri weaponry out in the open, fearing that it might bring Damage Control or even the Avengers onto them. However, the ignorant Brice refuses to heed Toomes' advice, which finally incited an angry Toomes to order Brice to leave, telling him that he is no longer part of the team. Brice attempts to storm out, but threateningly asks whether this is a good idea, with all that Brice knows. He implies that he might tell Toomes' wife about what Adrian is actually doing for a living. Realizing that he can't have that happening, Toomes grabs a gun from a nearby table which he believes to be an anti-gravity-gun. However, the gun is actually lethal and instead of immobilizing Brice, the blast of the gun disintegrates him completely. Despite being shocked that he killed Brice by mistake, Toomes picks the Shocker gloves from Brice's ashes and tosses them at Schultz, claiming that Schultz is the new Shocker now.

At the beginning of the movie, Jackson Brice is shown to be lazy and doesn't care about his job, as he arrived late to work and lying to Toomes about it after the latter confronts him. Later, when he and Schultz were selling weapons, he was shown to be violent and destructive, and also very sloppy at keeping the weapons dealership subtle, as his recklessness brought the attention of Spiderman, whom the latter discovered the presence of the Vulture. It was revealed that the only thing Jackson cared about in his life is amusing himself instead of taking anything seriously. Jackson Brice is also stubborn and intolerable after as proven when he ignores and mocks Toomes, and then threatens to tell his wife about his true business, after Toomes kicked him out. However, his selfishness led to his death after Toomes killed him with a blaster, although he didn't mean to kill him as he actually meant to grab the anti gravity gun. Despite this, because of Brice's unlikable personality and threats, the mostly honorable Toomes showed little remorse for killing him. All this makes Brice the most evil (or at least the most selfish) of Toomes's crew.

Brice discusses keeping all of the weapons. 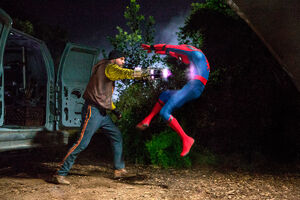 Shocker attacks and knocks back Spider-Man.