Member of the Hale Pack (formerly)

Being with Lydia Martin (formerly).

To find out about Scott McCall's secret (succeeded).

To kill whoever his master/s want (partially succeeded).

Jackson Whittemore, also known as the "Kanima", is an anti-hero in season 1 of Teen Wolf, and a major antagonist in Season 2. He is a bully to the main character Scott McCall, as well as one of the most popular kids in Beacon Hills High School. In season 2, he became the Kanima, a form of shapeshifter that is the mutation of the werewolf gene. During that season, he is controlled by Matt Daehler and later Gerard Argent.

He was portrayed by Colton Haynes.

Jackson was conveived after his parents were killed in a car accident. Although it looked like an accident, evidence implied murder. He was adopted by a lawyer, something he would use to his advantage in the future. He grew up to be one of the most popular kids in Beacon Hills High school. He was the best player in lacrosse and he lived with a wealthy family. However, his pride is what ultimately turned him into a bully, as well as what made him obsessed with winning his game himself and getting everyone's attention.

Scott McCall’s sudden improvement on the lacrosse field threatens Jackson’s supremacy, making him suspicious and prompts his investigation of Scott, and eventually Derek Hale, who he believed was dealing steroids.

Over several episodes, Jackson has witnessed many of Scott’s enhanced abilities including his speed and strength. He eventually discovers a claw embedded in his SUV and connects it with the odd holes he found in one of Scott’s lacrosse gloves. The next day at high school, Jackson was scratched on the back of the neck by Derek, a Beta Werewolf suffering from wolfsbane poisoning. He began suffering hallucinations, and even got to Allison in order to find out more about Scott. While he seemed physically recovered later on, a deep growl from The Alpha caused Jackson intense pain and which led to him collapsing. During that same episode, his girlfriend, Lydia, was trying to create a "Self-igniting Molotov Cocktail" to give to Scott in order to defend himself against the Alpha, whom they believed to be Derek. However, when she asks Jackson for a specific ingredient that would ignite it, he gave a different ingredient that would make useless for Scott in terms of self-defense. Whether this decision was Jackson himself, or a behavioral change resulting from the wolfsbane is unclear. If the latter is true, it's clear that Jackson has become more and more desperate to get rid of Scott that he was willing to get him killed. His decision nearly cost everyone, including his own, life as the Alpha made Scott transform and tried to have him kill them all, however once he hears Allison's voice, he resorts to normal.

The next day, Jackson visits Dr. Conrad Fenris to have the wounds checked out. The doctor says he has aconite (wolfsbane) poisoning but the injury is healing. After Searching Wolfsbane on Mrs. Mcall's computer, he finally figures out Scott's secret. He blackmails Scott to make him a werewolf as well in exchange for not telling Allison. He takes advantage of Scott's enhanced hearing ability by whispering to him and threatening to ruin his life if he didn't give him what he wanted. In addition to the physical symptoms, the scratches glowed when The Alpha was near.

Chris Argent tampers with Jackson's car in order to force a breakdown as an excuse to approach the boy and question him. Derek wants to get Jackson out of the way so that he cannot expose Scott, but Scott intervenes. Scott forces Jackson to take Allison to their formal dance, since he's not allowed to go. While there, he drinks, and sees red lights in the woods. Thinking it's the Alpha he begs to be transformed. Instead, it is Chris Argent. He then tells them that Scott is the other Beta. In the season finale, Jackson helps Lydia get aid for her injuries. Then he helps Scott, Stiles, Allison, and Derek defeat Peter Hale , the Alpha Werewolf. He then goes to the Hale House to ask Derek for the bite.

Derek bit Jackson but his body rejects the bite for unknown reasons. The rejection causes a black viscous liquid to ooze from his ears, and nose. When Derek notices this, he seems to be frightened by him, probably aware that he is become something else. Still thinking he would become a werewolf, he tried to film himself shifting on the full moon but got several hours of footage of himself sleeping and still very much human. He goes to Derek looking for answers but finds Chris and the hunters instead. Chris suggests he stop trying to become a werewolf. That night on the lacrosse field his truck is stuck in the mud. In a moment of frustration he lifts the truck almost completely off the ground. He asks Danny to enhance the recording of him sleeping during the night of the full moon. Danny, with the help of Matt, finds 2 hours of footage missing from the recording. Derek feeds Jackson kanima venom to see if he is the creature. Jackson is paralyzed suggesting the venom did not come from him. The partially restored portions of the full moon video show him sit up in bed. His eyes begin to glow. After a fight and a kiss with Lydia, Jackson transforms into a Kanima and is drawn to meet with someone in a car on a lonely road. Jackson, in kanima form, fights Derek to a standstill, and is shot several times by Chris Argent. Ths shots prove ineffective, and he heals immediately to take down Chris.

However, Gerard shows up, and he seems to bow before him. Then, at a gay dance club called Jungle, he apparently paralyzes several patrons and Danny. Derek shows up and slits his throat but he seems to heal and is next seen in human form bloody but unharmed. Stiles, Scott and Allison lock him in a Sheriff's van. He says he doesn't remember anything they claim he did as the kanima. He transforms into the kanima and escapes. He is next seen in human form at the Sheriff's office with his father. Jackson secures a restraining order against Stiles and Scott which requires them to maintain a distance of 50 feet and cease all harassment.

At school, Jackson allows a snake to crawl down his throat. Allison tries to talk to him but he becomes violent. Naked in the locker room, he threatens her. She attempts to physically restrain him but fails. He then shakes himself and seems to not remember the exchange. Scott sees him, naked, on top of Allison and attacks. They fight, destroy property and end up in detention. Jackson partially transforms into the kanima and attacks Matt and Erica before scrawling a warning on the library chalkboard. Jackson is possessed by the Kanima Master and attends a secret rave party to reach his next victim. Stiles, Erica, and Isaac drug him with ketamine and interrogate him. The master, speaking through Jackson, says those he's killed so far were all murderers guilty of killing "me" meaning the master.

Jackson transforms into full kanima, escapes and kills the party promoter, Kara Simmons. Jackson warns Lydia that she doesn't want him at her birthday party. At the party, Jackson hallucinates that two faceless people are looking for him because, they say, they are his parents. He saves Matt from drowning in the pool. When Matt captures people at the police station he is mostly in kanima form killing everyone Matt wants him to. Later when Gerard kills Matt, Jackson becomes his tool of vengeance.

At the lacrosse game, Jackson warns Danny if he begins to act weird on the field, he is to run away. Later when the game ends the lights go out, and when they come back on Jackson is lying on the field; not breathing. He apparently clawed himself in the chest, killing himself. He is removed from the field in a body bag. A clear viscous liquid seeps from the bag. When Mrs. McCall opens the bag she finds him encased in a clear cocoon from the neck down.

He begins twitching and eventually fully revives. Gerard uses the Kanima form to attack the werewolves and even Allison but once Gerard is incapacitated the Kanima is free of his influence. Lydia uses the house key Jackson gave her to remind him of his true identity. He transforms back to human form and Derek and Peter attack and kill him again. Somehow his wounds heal and he stands up transformed into a werewolf with blue eyes.

He and Lydia reconcile. Lydia explains that the doctors looked like total idiots after he turned up alive. She says Derek taught him the "Werewolf 101" like how NOT to randomly kill people during the full moon. Lydia says his dad moved him to London. She makes a joke that an “American werewolf in London” will be a disaster, a reference to the 1981 film of the same name. Jackson is again mentioned when Stiles is trying to convince his dad that shapeshifters are real. Stiles succinctly sums up Jackson's situation, "Jackson was the Kanima first then Peter and Derek killed him and he came back to life as a werewolf and now he’s in London.".

Jackson is shown throughout the show to have a very bad temper. Despite being somewhat spoiled, he was a deeply insecure young man and was described as having this desire to always want to please others. That being said, he is angered once Scott gains his werewolf powers and steals his thunder. He is shown to be determined, almost to the point of obsession, as he refused to accept that Scott just naturally got better at Lacrosse, and insisted that he was hiding something (even going so far as to stalking him to find out).

He would even push Scott during the game so he could win himself, and even make sure no one pass the ball to him. Though a major antagonist, especially in season 2, he was not truly evil as he had no control over his actions as the Kanima. It is also implied that the reason he behaves in such a way is because he never knew who his real parents were before they died. It's even stated by his adoptive father that he's never said "I love you" since the day he found out he was adopted. Although in spite of this, he was still somewhat unstable given he ruined Scott's weapon of choice against "Derek" in hopes of him getting killed in Night School, and also threatened to ruin Scott's life if he didn't get him turned into a werewolf. 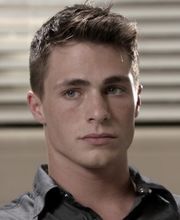 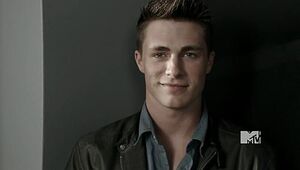 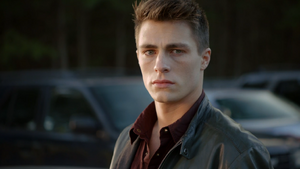 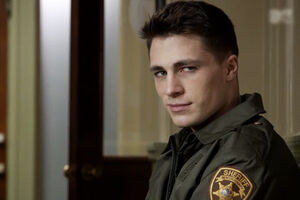 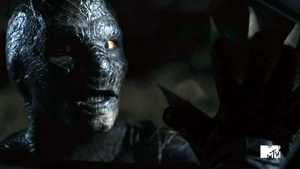 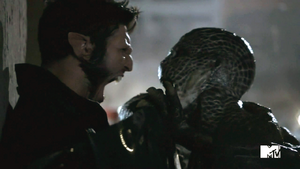 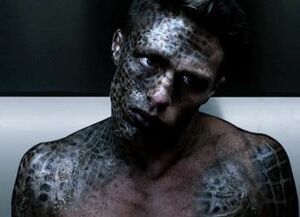 Jackson transforming into the Kanima.
Français
Community content is available under CC-BY-SA unless otherwise noted.
Advertisement