Torturing anyone who resist.
Training wolves with Bliss and music.
Forcing people to join Eden's Gate.

Kill the Deputy.
Prepare and protect people from The Collapse and deliver them unto Eden’s Gate (both failed).

Jacob Seed is one of the three secondary antagonists of Far Cry 5 (along with John Seed and Faith Seed). A former war veteran turned Herald for Joseph Seed, Jacob is in charge of training the Project at Eden's Gate cultists and preparing them for The Collapse. Jacob believes only the strong should survive and the weak will be purged, something that he greatly enjoys.

He was voiced by Mark Pellegrino, who also played Lucifer and Nick in Supernatural, Paul Bennett in Dexter, Jeremy Baker in Evolution, and Adam Dorsey portrayed the character in Inside Eden's Gate.

Jacob is the oldest brother of John and Joseph Seed. A fighter from a young age, Jacob protected both of his siblings from their parents, meaning that he was the protector.

According to the Book of Joseph, Jacob set their stepparents' house on fire in retaliation for abusing the brothers. This resulted in the brothers being separated, and Jacob being sent to a juvenile detention center.

After serving his sentence, Jacob joined the army and fought in Iraq during the Gulf War. After an ambush, Jacob was separated from his unit alongside a soldier called Miller. With no food, radio or shelter the two began walking for seven days until they ran out of water and were being hunted by wolves. Jacob was able to accept his death and, in that moment, realized this was test so he murdered Miller, ate his corpse and was eventually rescued.

Jacob was eventually diagnosed with PTSD and was given treatment in a military hospital until he ran out of money. He was discharged and lived in a homeless shelter in his hometown, where he was found by Joseph and John.

After Joseph Seed took total control of Hope County, Jacob became the Herald of the Whitetail Mountain region where he was in charge of cult security and training.

Jacob was present when several US Marshals entered Hope County with the intent to arrest The Father. Thanks to the intervention of several cultists, Joseph is saved from arrest. The Junior Deputy and Sheriff Whitehorse escape the cult but Deputy Pratt is kidnapped by Jacob and mentally enslaved by the latter.

The World is Weak

As the Deputy’s progress in the Whitetail Mountains increase, Jacob abducts them, takes them to his hotel and prepares to indoctrinate them. As Pratt ties them down, Jacob explains his viewpoint that the world has become weak and lost its strength due to its reluctance to cull the herd, all the while the Deputy and several other Resistance members are forced to look at predatory pictures to help cement Jacob's words. He winds a music box that causes the Deputy and other victims to have seizures. When the Deputy awakens they are surrounded by corpses, implying the seizure caused them to kill the other victims.

We Must Be Strong

Jacob’s hunters kidnap the Deputy yet again. When they awaken they are trapped inside a cage with several other prisoners. Pratt is outside when Joseph and Jacob meet and listens to his brother explain his backstory about his daughter to make a point about sacrifice. Leaving them in Jacob's mercy, he utilizes the music box to make them have a seizure again and they wake up outside in the mountains, surrounded by blood and bodies.

Before taunting the Deputy over how they are already indoctrinated thanks to his brainwashing techniques as "Only You" plays yet again, causing them to black out.

The Deputy wakes up inside the same cage where they were before with Jacob sitting outside with food. He claims they've been imprisoned for an entire week, whether this is true or a demoralization tactic is unknown. To showcase his brainwashing abilities Jacob has the enslaved Pratt give him a shave and wash him all whilst explaining his "test", the time he was forced to kill and cannibalize his army mate Miller when they were separated from the unit, using the anecdote as an example of the weak having their purpose which the Deputy will understand soon before using his music box to make them have a seizure again.

To Jacob's surprise, Pratt helps the Deputy escape leading him to punish Pratt.

After provoking Jacob further, he kidnaps the Deputy yet again and places them in the same cage. He toys them by keeping the music box at arms length outside of their cell then informs them that they have a part to play and a "tool" before making them have another seizure. Only this time when they complete it the final enemy is Eli Palmer, the leader of the Whitetail Militia whom Jacob has manipulated the Deputy into killing. This time Jacob appears in the seizure who reveals he was training the Deputy by giving them epilepsy and releasing them so they could gain Eli's trust then kill him. With no other purpose for the Deputy, Jacob prepares for them outside so he can kill them.

The Deputy exits The Wolf's Den and enters another seizure, with Whitetail Mountain serenaded with "Only You" and a red sky. The area is surrounded with cultists and Judges, to escape the seizure the Deputy has to destroy several beacon towers. Escaping the vision the Deputy is surrounded with more Peggies and Jacob taking a sniping position in the mountains. Despite the adversity the Deputy defeats the cultists and Jacob. Mortally-wounded, he rests on the mountains and explains that even if Joseph doesn't actually speak to God, it doesn’t matter as The Collapse is imminent and even compares America to other empires such as Rome and Babylon, even using the past wars as an excuse to kick off The Collapse before he dies of his wounds. The Deputy takes Jacob's key to rescue Pratt.

Due to his wartime, Jacob has adopted a Darwinistic outlook on life. He has great pride in his work of "culling the herd", though believes the world has lost its edge over its reluctance to sacrifice the weak any longer, marking it as the survival of the human race. However, it's implied this viewpoint was a result of PTSD as Joseph states he brought "many demons" home from the war with him and that his worse fear was not of dying but not leaving behind any legacy as a soldier. Despite his loyalty to the Father, Jacob held doubt that Joseph actually "spoke to God" but nevertheless truly believed Joseph’s premonition of The Collapse was true (even likening America to several other empires before him, like Rome and Babylon) and following his brother gave him a renewed mission and loyalty, once claiming that he’d be willing to die for Joseph.

As a military man, Jacob's battle-ridden and thuggish demeanor hides a very strategic mind. In fact most of his attacks against the Deputy are more cerebral than physical. His methods of indoctrination involve Classic Conditioning, with the stimuli of "Only You" played over predatory images force those he brainwash to be utterly devoted to his beliefs and unquestionably loyal tools for his cause. He does out of his way to make certain his victims have suffered as much as he has by starving them in cages as he had in the Gulf War. Also, Jacob holds a great deal of disdain for the Whitetail militia, claiming they were an insult to soldiers and took a personal delight in brainwashing the Deputy to murder Eli. Jacob considered Eli a "coward", Tammy a "housewife" and Wheaty a "teenager".

Matching his predatory nature and survivalist viewpoint, unlike his siblings, Jacob used animals in his war against the Resistance, his personal favorite being wolves due to them being hunters to their core much like himself though these were ones who were mentally broken with music and Bliss so they'd be strong and obedient. Due to his backstory of being hunted by wolves in The Gulf War it's possible Jacob may have done this out of personal revenge as well as strategy.

He holds some knowledge about historical empires such as Babylon, Rome, and the Mongols and finds the human brain as a "fascinating subject". He is also very intelligent, especially when he indoctrinates the Deputy as part of his plan to weaken and demoralize the Whitetails by using them as a tool to kill Eli. 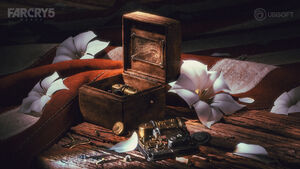 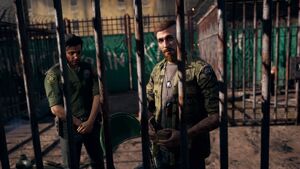 Jacob winding up his music box to make the Deputy have a seizure. 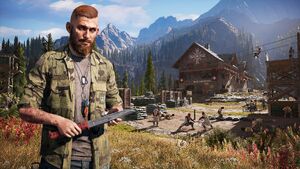 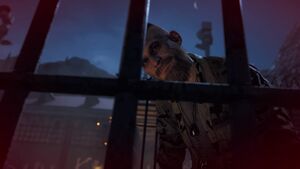 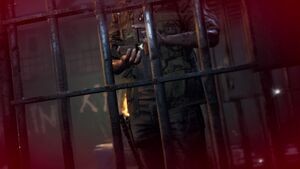 Jacob causing the Deputy to have a seizure with his music box. 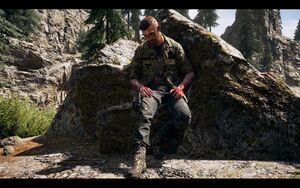 Jacob's corpse.
Add a photo to this gallery

Retrieved from "https://villains.fandom.com/wiki/Jacob_Seed?oldid=4209860"
Community content is available under CC-BY-SA unless otherwise noted.