Criminal
Fashion designer
Founder and Head of his own fashion company

Antagonizing and attempting murder on Zoolander and his friends.

Making fashion clothes.
Loving and being with Katinka.

Manipulate Derek Zoolander into assassinating the Prime Minister of Malaysia and then to kill Zoolander himself as well as Hansel McCdonald (first film; failed).

Kill Derek Zoolander, Hansel McDonald and Valentina Valencia and to obtain Derek Jr.'s heart in order to consume his blood to be able to become immortal and young forever (second film; formerly).

He was portrayed by Will Ferrell, who also portrayed Lord Business in The LEGO Movie, Cam Brady in The Campaign, Franz Liebkind in The Producers, the title character in Megamind and Larry the Architect in the MTV Movie Awards parody of The Matrix Reloaded.

Mugatu and model agent Maury Ballstein are charged by the fashion industry to find a model that can be brainwashed to assassinate the new progressive-leaning Prime Minister of Malaysia, allowing them to retain cheap child labor in the country. Though Mugatu has previously refused to work with Derek for any show, Derek accepts Mugatu's offer to star in the next runway show, obviously unaware of Mugatu's true intentions.

Mugatu takes Derek to his headquarters, masked as a day spa, where Derek is conditioned to attempt the assassination when the song "Relax" by Frankie Goes to Hollywood is played. Matilda, who felt partially responsible for Derek's retirement, is suspicious of Mugatu's offer, and tipped off by an anonymous caller, tries to enter the spa, but is thrown out. Matilda tries to voice her concerns to Derek once he leaves, but he ignores her.

Matilda follows Derek to a pre-runway show, where he loses to Hansel in a "walk-off" judged by famous singer David Bowie. Matilda receives another anonymous call to meet at a nearby cemetery. Matilda along with Derek find the anonymous caller is hand model J.P. Prewett, who explains that the fashion industry has been behind several political assassinations, and the brainwashed models are soon killed after they have completed their task. Before J.P. can explain more, Katinka, Mugatu's chief henchwoman, and her aides attack the group, forcing Derek and Matilda to flee. They decide to go to Hansel's home, the last place they believe Mugatu will think to look, and Derek and Hansel resolve their differences while partaking of Hansel's collection of narcotics. While recovering, Derek also finds that he is falling in love with Matilda. Derek and Hansel break into Maury's offices to find evidence of the assassination plot, but cannot operate his computer to find them. Derek leaves for the show, Hansel following later with the computer in hand, believing that, as told to him by Matilda "the files are inside the computer".

Matilda tries to intercept Derek before the show, but Katinka thwarts her attempt. As Derek takes the runway, Mugatu's disc jockey starts playing "Relax", activating Derek's mental programming. Before Derek can reach the Prime Minister, Hansel breaks into the DJ booth, and switches the music to Herbie Hancock's "Rockit", breaking Derek's conditioning. Hansel and the DJ have a brief fight before Hansel eventually unplugs the system, moments before Derek was about to snap the Prime Minister's neck. Mugatu attempts to cover up the incident, but Hansel offers Maury's computer as evidence, smashing it to the ground which he believes would release the incriminating files. Though the evidence is destroyed, Maury steps forward and reveals he had backed up the files, and offers to turn over the evidence of the assassination plot after years of guilt for his complicity in the conspiracy. Mugatu, having finally snapped, falls into a violent rant about how much he hates Zoolander, and even attempts to kill the Prime Minister himself with a throwing star, but Derek stops him by unleashing his ultimate model look, "Magnum", that stuns everyone and even stops the weapon in mid-air. Mugatu, having been caught in the moment, never ran away, getting himself arrested.

After the events of the first movie, Mugatu is sentenced to two consecutive life sentences, and locked away in a maximum security prison for criminally insane fashion designers; meanwhile, Zoolander's wife is killed and Hansel is permanently scarred when his new school collapses due to shoddy construction, an incident Derek blames himself for, and his son is later taken away by child services. Years later at Interpol, Derek Zoolander discovers that his son may be in danger. After Interpol translated the term "aquavita" into "fountain of youth", Hansel receives a call from Sting, who tells them the prophecy of Steve, the first male model created by God, and how anyone who cut out the heart and drank the blood of a descendant of Steve would gain eternal youth and beauty. Zoolander quickly runs to the orphanage, realizing his son was a descendant of Steve, only to find he had already been abducted by the headmaster, who was Mugatu's DJ in disguise.

Looking for answers, Derek, Hansel and Valentina travel to the prison where Mugatu is being held, and Zoolander goes to confront him alone. In maximum security, Mugatu is chained to a large spike in the center of a room and bound in a straitjacket, forcing him to use his feet for manipulating things. Mugatu admits to abducting Derek Jr. with the intent of killing him, and also to being responsible for his weight by making sure he was constantly overfed at the orphanage. He then uses reverse psychology to trick Zoolander into approaching him, and then again into switching places with him, and finally escapes by wearing a crudely made Zoolander mask (the guards, being former male models, not noticing the difference, even as he takes off the disguise in the hallway). Mugatu then escapes via helicopter, leaving Valentina to rescue Zoolander while Hansel stows away on the helicopter.

Mugatu lands at the home of Alexanya Atoz, and the two of them share a passionate moment; this is quickly ended, however, when he murders Don Atari by snapping his neck with his feet in a fit of violent rage. He tries to goad Derek Jr., who is held hostage in the mansion, into eating more food, but soon gets annoyed and has him taken away. Hansel follows them, and leads Derek and Valentina to the place of the sacrifice: a bath house located underneath the IncrediBALL, where every other famous fashion designer was gathering to take part. The three of them sneak into the sacrifice room disguised in cloaks, and Zoolander interrupts at the last minute, pushing Mugatu away before he can kill Derek Jr. Mugatu then throws the knife at Derek Jr., and Zoolander attempts to block it once more using Magnum, but gets stabbed in the cheek instead.

In a fit of shock, Mugatu finally announces that the prophecy of the son of Steve was fake, and that he had no intention of obtaining eternal beauty after all; his real plan, as it turned out, was to organize this ritual to bring Zoolander and all the most famous fashion designers into one room. Opening the floor of the bath house, revealing a dormant volcano underneath, he revealed his true plan: to use a bomb to activate the volcano, killing his enemies while he escaped via a rope to the surface. In the process, he also tells Zoolander that he was personally responsible for the accident that killed Derek's wife, by owning the construction company and purposely cutting corners. Discovering he was not responsible, Derek regains his confidence, and before Mugatu's bomb can fall into the volcano, he successfully manages to catch it in mid-air using his Magnum. Hansel then discovers his true father was Sting all along, and Derek Jr. gains newfound respect for his own father, and the three of them all make matching Magnum poses to help Zoolander lift the bomb away, with Derek Jr's pose being the legendary El Niño proving him to really be the child of Steve. With their combined powers, the bomb is lifted away and launched back into Mugatu, who is presumedly killed when it explodes. At the end credits however, Mugatu turns up alive and well and is last seen celebrating Derek's victory with his friends as it was revealed that the bomb gave him a new good personality and made him one of Derek's friends. 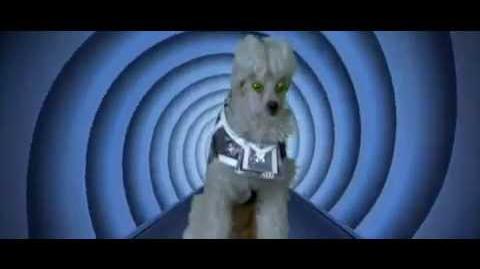