He was voiced by Arthur Grosser.

Jacopo de' Pazzi was the uncle of Francesco de' Pazzi and the great-uncle of Vieri de' Pazzi. While Francesco was the main force behind the Conspiracy, Jacopo described himself as "the voice of reason" of the group.

Jacopo is first seen in Tuscany with the other Conspirators. His next sighting is at a meeting in the Santa Maria Novella, where the conspiracy is planned. After the conspiracy, Jacopo is seen inciting the people to shout liberty, because he thinks the conspiracy was a success. But when he sees the body of his nephew hanging from a tower, he knows that his plans to take over Florence have failed, and escapes to Tuscany. 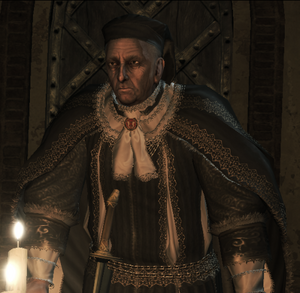 Jacopo meeting with Rodrigo Borgia and the other Pazzi conspirators.
Add a photo to this gallery

Retrieved from "https://villains.fandom.com/wiki/Jacopo_de%27_Pazzi?oldid=3292386"
Community content is available under CC-BY-SA unless otherwise noted.