Rebuild the continent of Atlantis for her to rule over.
Create an army of monsters and use them to conquer the world.
Wipe out humanity. (all failed)

Natla, or better known in her false modern identity Jacqueline Natla, is the main antagonist of the Tomb Raider series.

Natla is a former ruler of Atlantis who wishes to take control of it once again. She is Lara Croft's arch-nemesis.

Jacqueline Natla hires archaeologist Lara Croft to retrieve the four missing pieces of an ancient and mysterious artifact called the Scion. After finding all of the pieces that Lara discovers that the Scion is an object that contains the memories, history and knowledge of the undiscovered continent of Atlantis.

She also comes to know that Natla was in fact one of the three rulers of Atlantis (the other two being Qualopech and Tihocan) before she betrayed them and was imprisoned in a cryogenic device. Thousands of years later an atomic bomb test freed her from her prison. Lara soon discoverers that Natla is rebuilding the city and cloning Atlanteans and needs the Scion to complete her work.

When she arrives in Atlantis, Lara meets Natla and tries to destroy the Scion but the villain jumps on her and they both fall into a pit, only Lara reaches and hangs on to a ledge while Natla falls to her death. Later Lara destroys the artifact and escapes from the crumbling island where Natla's evil plans took place.

Tomb Raider Anniversary is the remake of Tomb Raider so the events unfold in a similar matter with a few differences. Natla is much skinnier and alien-like than in the original. In the end she tells Lara that she wants to bring the seventh age and offers Lara the opportunity to rule beside her but she declines and shoots the Scion, Natla jumps on her but falls in a fiery pit, later in the game she reappears in her demonic Atlantean form and wants revenge, after a battle Lara shoots a vulnerable spot in her back and forces a column to crumble on her which apparently kills her.

Natla returns to Lara's surprise after having seen her being crushed by the column years before (Underworld is based in the same continuity of Tomb Raider: Anniversary) and sees that she is imprisoned by Lara's enemy Amanda Evert, who dug her up. Early in the game she tells Lara about Helheim and Avalon being one and the same and informs Lara that she needs Thor's relics to gain access. After visiting Jan Mayen Island to retrieve Thor's hammer, Lara sets off to the Andaman Sea on the coast of Thailand to find Amanda's ship. Lara confronts and threatens to kill Natla, but is stopped when Natla explains that a ritual is also needed to open the gates of Helheim; a ritual that only Natla knows. Realizing she has no choice if she wants to enter Helheim/Avalon, Lara then smashes the capsule open, allowing Natla to escape. After arriving at Avalon, Natla reveals that she was manipulating Lara to reach an ancient device called the Midgard Serpent to bring about the 'Seventh Age.' Lara manages to destroy the device and strike Natla with the thrown Thor's hammer, which causes an explosion that throws Natla into the either surrounding the mechanism as it collapses. In the main game as released, this presumably kills her.

In the expansion game Lara's Shadow that stars Lara's doppelganger we see it dragging Natla out of the entire and putting her into the machine the created it in order to let her survive. The doppelgänger is ordered to kill the real Lara but she finds a way to free the clone from Natla's control. The real Lara takes control of the doppelgänger and orders it to kill Natla ones and for all and make sure she suffers. The doppelgänger then finds Natla and let's the machine containing her crumble, Natla pleads the doppelganger to drag her away from the upcoming either but Lara's clone stays still as it watches Natla drown.

Shadow of the Tomb Raider

In the original version of the post-credits scene, an envelope containing Jacqueline Natla's name can be seen in Lara's desk. This was later omitted in the patched version of the same scene.

Natla has two bat-like wings which she can use to fly, sometimes at incredible speed. Her main attack is to shoot fireballs. As an Atlantean, she can survive many things which would kill most, including lava (though she gains a fiery demon appearance when she reemerges) and being crushed by heavy objects. The only two things which seem able to kill her are Thor's Hammer and either, although in the downloadable expansion continuity she is immune to the former and slightly resistant to the latter, although she later drowns in it. 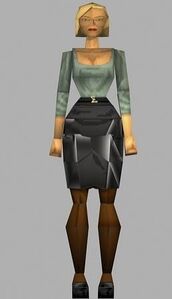 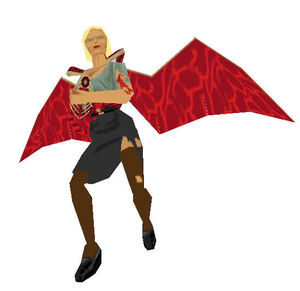 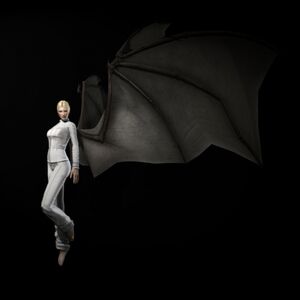 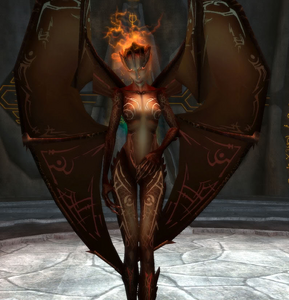 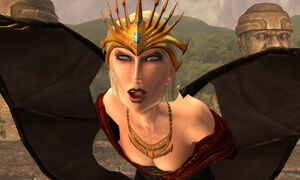 Natla, moments before her frozen imprisonment.