Killing people to ensure his immortality.

Become immortal by any means possible.

Kill the others in order to maintain his own immortality (both failed).

Jacques is a major antagonist in Scooby-Doo on Zombie Island. He is a ferryman who secretly worked with Simone Lenoir and Lena Dupree to achieve immortality by draining the life force of the inhabitants of Moonscar Island. Unlike them, he is entirely selfish and will do anything to get his way.

He was voiced by Jim Cummings, who also played Fuzzy Lumpkins in The Powerpuff Girls, Pete in Disney's Mickey Mouse cartoons, Nessus in Disney's Hercules, Long John Silver in The Pagemaster, Ed in Disney's The Lion King, Hernán Cortés in El Dorado, the Medicine Man in Young Pocahontas, Razoul in Disney's Aladdin, Dr. Robotnik in Sonic the Hedgehog SATAM, Lord Boxman in OK K.O.! Let's Be Heroes, Sierra in The Land Before Time VII: The Stone of Cold Fire, the Bears in Sing and Hadrian in Minecraft: Story Mode.

Jacques was originally represented as a genuinely friendly Cajun ferry driver, but it was later revealed that along with Lena and Simone, he had tricked the gang into going to Moonscar Island, so he could steal their life force.

As Scooby and Shaggy were running from the zombies, it was revealed that Jacques was also a werecat. It was also revealed that he was aware that Simone Lenoir and her aid Lena Dupree were draining the life force of the former inhabitants of the island, in order to preserve their immortality. He later asked for immortality, and they granted it to him. Unlike Simone and Lena, who did not know that the cat god would curse them to drain life from others (it is even implied that they despise it cursing Morgan Moonscar for forcing them to become werecats to avenge their tribe), Jacques had absolutely no problem with having to kill others to preserve his immortality. Therefore, this makes him one of the most despicable antagonists to ever appear on Scooby-Doo.

He was defeated when the moon's shadow moved past the midnight alignment of the Harvest Moon. He, along with the other werecats, disintegrated into ashes. With the werecats deceased, the zombies could rest in peace.

Jacques's actions make him outright despicable as unlike his co-workers, he does not care about anyone else. Furthermore, unlike most Scooby-Doo villains, he is a normal human being who killed many people instead of merely attempting to and used the gang's trust against them all so he could steal their life force. Self-serving and violent, Jacques will forever stand out as a vile human being. Indeed, not only did Jacques willingly desire the curse, be he seemed much more violent and sadistic than even his two partners, thus making it obvious Jacques drunk on the power he got from the curse along with immortality. 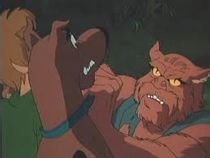 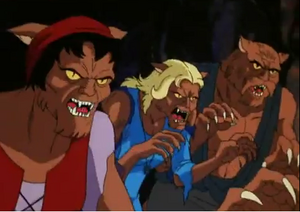 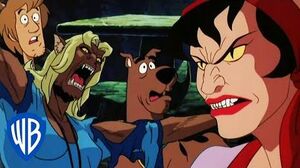