Top Ruler of the Galaxy (briefly)

Recover "his" experiments and recruit them to create him own evil army and take over the galaxy (failed).
Rule the galaxy with his army of Leroy clones (succeeded in Leroy & Stitch, but was eventually defeated by Lilo, Stitch, and Reuben later in the film, losing control of his rule).
Destroy the experiments after failing to retrieve them for himself (Leroy & Stitch; failed).
Take over the universe with the powers of the Spiritual Stone (Stitch! anime; failed).

Dr. Jacques von Hämsterviel, also simply known as Dr. Hämsterviel, is the main antagonist of the Lilo & Stitch franchise. He is the arch-nemesis of Stitch, the boss of Gantu and Reuben, and the former best friend and partner of Jumba Jookiba.

He is the unseen overarching antagonist of the first film and the animated series Stitch & Ai, and the main antagonist of the 2003 sequel Stitch! The Movie, the TV series, the 2006 series finale film Leroy and Stitch, and the Stitch! anime series. His first major appearance is in the aforementioned movie, where he begins plotting to take over the galaxy.

He was voiced by Jeff Bennett in all of his appearances, who also played H.A.R.D.A.C., Big Bad Wolf, Scarecrow, Mr. Smee, Bradley Uppercrust III, Robert Canler, Dick Hardly, Tong Fo, Henri Ennui, Morty, The Huntsman, Ozzy, Jasper, Big Billy, Ace, Grubber, and Xavier the Villain. In the Stitch! anime, he was voiced by Kirk Thornton in the English dubbed version, and by Hiroshi Yanaka in the Japanese version.

Hämsterviel is a short, chubby, rodent-like alien with white fur and red eyes. While Hämsterviel views himself as a hamster, his appearance is more to a gerbil or rabbit, he has long ears like the latter with pink innards, buck teeth, a pink nose, and a long tail with bushy brown fur at the tip. Hämsterviel always wears a red cape with a gold "H" brooch attached to it.

Hämsterviel worked alongside Jumba Jookiba as a scientist. It was Hämsterviel that went to the authorities about the illegal experimentation. Hämsterviel was more than likely arrested as well because of the heavy affiliation. Apparently, Hämsterviel's plan was to; fund Jumba's experiments, then take them for himself, squeal on Jumba, and take over the universe.

Little did Hämsterviel know, Jumba was released to capture his latest experiment 626. During these events, Jumba reformed and spent his days on Earth with a new family. Eventually, Hämsterviel would escape, recruits Gantu (the former captain of the Galactic Federation) as his henchman, and seek to regain "his" experiments from him. Hämsterviel's attempts failed, but the constant failures did not prevent the mad scientist from trying again. Years after these events, Hämsterviel sets out, to harvest absolute power instead.

Hämsterviel appears as the main antagonist of the film, setting up his role for the rest of the franchise. Here, with his new associate Gantu, Hämsterviel plots to take over the galaxy by using the power of Jumba's 625 experiments who have been podded since Jumba's arrest. He orders Gantu to find the pods which are located in Jumba's room in Hawaii. Once the experiments are captured, Lilo and Stitch head over to Gantu's ship before the plan can be complete. Lilo is captured as well as Stitch. While Lilo is put into a cell, Hämsterviel plots to cut Stitch in half via a laser. However, Stitch breaks free and traps Hämsterviel onto the platform. After Lilo's rescue and a scuffle with Gantu, the experiments are accidentally released on Hawaii. With Hämsterviel under arrest, Lilo and Stitch prepare a hunt for each experiment with the exception of 625, whom Hämsterviel unleashed thinking he would be another Stitch power wise, but instead, he was a lazy sandwich maker.

Hämsterviel currently resides at the Galactic Prison, where in his cell he communicates with his minion Gantu. He constantly appears on a giant screen in Gantu's home, giving him orders and constantly berating and scolding him about his endless line of failures. On occasion, he has escaped prison and went to Earth. In one episode, he accidentally became the pet of Lilo's rival, Mertle, who named him as "Milton". Eventually, he has grown to like her and is currently her only friend, but this was only in that one episode (since he attempt to destroy the experiments in Leroy and Stitch, which Mertle and her dog experiment named Gigi is involved and doesn't care about that). Also, in the crossover episode Rufus, he has Dr. Drakken and Shego capture Stitch so they can clone him.

In Leroy & Stitch, Hämsterviel escapes from prison with the help of Gantu and forces Jumba to create a new experiment, which the alien rodent names Leroy.

He even arranges for Jumba, Pleakley, and Stitch to be sent into a black hole. After Lilo and 625 (or Reuben as he calls himself) are captured, Hämsterviel personally leaves for Earth to eliminate the experiments to ensure that he remains in power. However, before Hämsterviel leaves, he ungratefully fires Gantu, declaring that he has outlived his usefulness to him since he has the Leroy clones to do a better job serving for him. Angered of being used and betrayed, Gantu (with a change of heart) breaks Lilo and Reuben out of prison and they reunite with Jumba, Pleakley, and Stitch (who have managed to evade the black hole). When Hämsterviel goes to watch Leroy and his clones destroy the other experiments, his plan is thwarted by the arrival of Gantu, Lilo, Stitch, Reuben, Jumba, and Pleakley, who team up with all the other experiments to fight against Leroy and his clones. After Lilo, Stitch, and Reuben defeat all of the Leroys with "Aloha `Oe," the angry experiments toss Hämsterviel around like a beach ball, much to his dismay. With the Galactic Alliance now safe, Hämsterviel is sent back to prison with all the Leroys. He is last seen angrily tapping his foot in his cell while the Leroy clones start to dance in their cells around him to the tune of "Jailhouse Rock".

In the third season, he allies with his old colleague Delia, a tyrannical warlord who wishes to weaponize Stitch's power cell. Hamsterviel uses Gantu and the other experiments Delia abducted to capture Stitch numerous times but constantly fails, resulting in the recurring gag where Delia tortures Hamsterviel at the end of each episode. Hamsterviel is eventually jailed in the season finale. 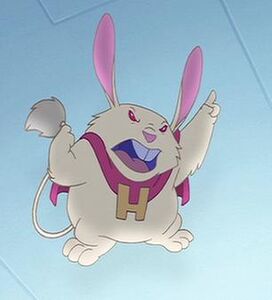 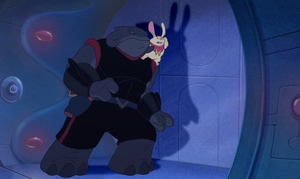 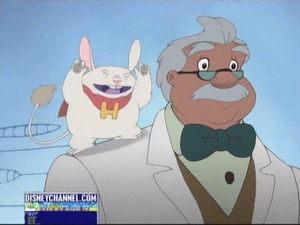 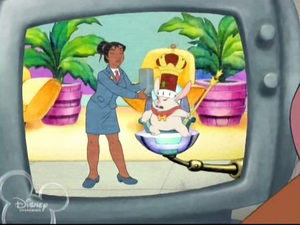 Nani in an alternate future, working for Emperor Hämsterviel. 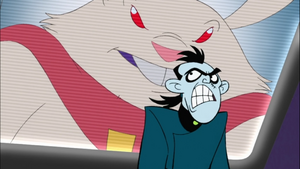 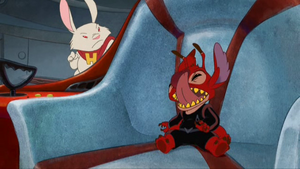 [[Leroy[[ picking his nose, just before Hämsterviel tells him to quit it. 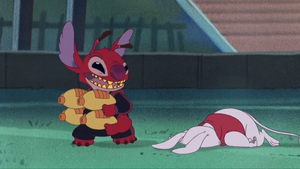 Leroy laughing at Hämsterviel's misfortune, before their cannon falls on top of them. 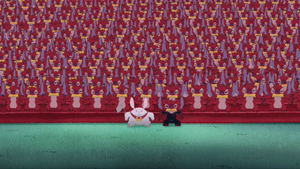 Hämsterviel, his original Leroy, and their army of Leroy clones preparing to attack. 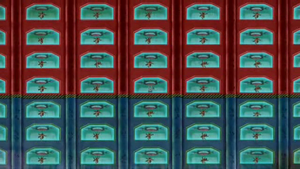 Hämsterviel and all of his Leroy's dancing to Jailhouse Rock. 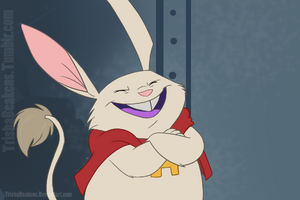