Destroy the Sailor Guardians (both failed)

Jadeite (Jedite in the DIC English dub) is a major antagonist and the first of Queen Beryl's generals in the manga and anime Sailor Moon. He is eighteen years old, making him second youngest of the four generals.

The first of the Shitennou to be sent out by Queen Beryl, Jadeite searched Tokyo for the Legendary Silver Crystal while using his Youma to gather life energy from the humans to replenish Queen Metalia. His plans included having the Youma he created, Morga and Garoben, assume human identities: Morga stealing the identity of Naru Osaka's mother to use her the jewelry store as a means to gather life energy and Garoben posing as a cram school instructor to brainwash a class to analyze the likely whereabouts of the illusionary silver crystal. Both attempts resulted in the awakening of Sailors Moon and Mercury.

While killed off by an awakened Sailor Mars in the original manga in an attempt to lure the Sailor Guardians to him with hostages, Jadiete survived in Sailor Moon Crystal and functioned as support for the other Kings of Heaven. While he and the other kings fend off the Sailor Guardians from entering the Dark Kingdom's stronghold following Beryl magnifying her hold over them, Jadeite was revealed to be Sailor Mars' love in their past life as she freed him from the enchantment controlling him.

But Jadeite was vaporized by Queen Metalia alongside the other kings when she deemed them no longer useful to her. But the four stones that the Shitennou were reduced to end up in Mamoru's possession with the quartet's spirits now able to resume their duty as his protectors and advisors.

Jadeite appeared in the first thirteen episodes. His task was to gather energy for the Dark Kingdom to release Queen Metalia. His tactics usually involved charging objects with dark energy and finding a way of attaching them to several people at once, usually with him or one of his monsters disguised.

He had Morga pretend she was Naru's mother at the jewelry store, charging the jewelry with dark energy. He had Balm set up a fortune-telling parlor to plant devil tarot cards to rob people of their energy. He also attached flowers to people on a radio station that would drain a person's energy. Jadeite put people in relaxation pods, turning them evil while taking their energy, had Iguara use animals called Chanelas to manipulate people into staring at them and steal their energy, had Kyurene play a tape that can drain life energy, had Derela absorb people's energy in a talent competition, had Garoben steal energy from a computer class through strange disks, had Ramwoir hand out clocks that made people rush and use up energy, had Dream Dolly put people to sleep and drain their energy, and teamed up with Titus to steal energy from people on a love cruise. Each and every one of his plans were foiled by Sailor Moon, with the help of Sailor Mercury and Sailor Mars.

Fed up with Jadeite's failure and Thetis's death, Queen Beryl commanded him to destroy the Sailor Senshi, lest he is punished with eternal sleep. Jadeite challenged the Sailor Senshi at the airport, where he made two jets chase after them. Tuxedo Mask arrived at one point to fight him but was defeated. However, Sailor Moon got one of the jets to chase after her while Sailor Mercury used Shabon Spray to create a fog, preventing Jadeite from seeing Sailor Mars put a scroll attack on his back, causing the planes to chase after him. Sailor Moon tried to hit him with Moon Tiara Action. He avoided the attack but was run over by one of the jets. However, he manages to survive barely.

Upon his return to the Dark Kingdom, he attempted to tell Queen Beryl the true identities of the Sailor Senshi, but as he had failed his mission, she refused to listen to him and froze him in a crystal of ice, then vanished him into endless darkness, condemning him to eternal sleep. 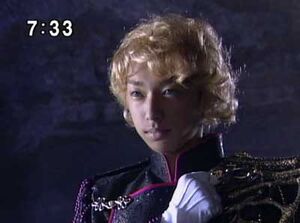