The Chronicles of Narnia: The Lion, the Witch, and the Wardrobe

After Jadis' takeover of Narnia.

Jadis' Secret Police, also referred to simply as the Secret Police, are a group of supporting antagonists in the book The Lion, the Witch, and the Wardrobe, part of the Chronicles of Narnia franchise, as well as its 2005 film adaptation of the same name.

They are a group of wolves and trees trained to track down, apprehend, and/or kill anyone or anything that their master Jadis the White Witch commands.

The Secret Police was formed by Jadis shortly after her takeover of Narnia as a means of intimidation, reconnaissance, and spying. She appointed Maugrim as the leader, and the Secret Police served as undercover spies and soldiers throughout Narnia. Despite being undercover, their allegiance to Jadis was discovered, though this did not hinder them from carrying out their duties. They made especially sure to keep an eye out for humans, as prophecy stated that four humans, two male, two female, would bring Jadis' rule to an end.

The Lion, the Witch, and the Wardrobe

After human Lucy Pevensie stumbles upon Narnia, she encounters the Faun Tumnus and quickly befriends him. She tells her siblings Peter, Susan, and Edmund, but they do not believe her. However, when Edmund finds Narnia, he encounters Jadis and, not knowing her true nature, casually mentions Tumnus to her. After leaving, Jadis instructs the Secret Police to arrest Tumnus.

The Pevensie children all come to Narnia and find Tumnus' home in shambles, destroyed by the Police during their arrest. The children are helped by some friendly beavers, but Edmund wanders off to visit Jadis again. Upon arriving, he is attacked by Maugrim, who is guarding the palace. He explains who he is, and Maugrim allows him to pass, only for Jadis to imprison him later. He meets Tumnus, locked away in the dungeon. When Tumnus is being tortured, Edmund stops it by revealing to Jadis about the beavers. Jadis sends Maugrim and the Police after them.

The Police arrive at the beavers' dam and break in, destroying the home while looking for the beavers and the children. One of the agents finds an underground tunnel, and they all give chase. The Pevensies and the beavers get out of the tunnel, and are helped in their escape by a friendly fox. After they hide, the Secret Police emerge from the tunnel, corner the fox, and one of them bites him and holds him in his mouth. Maugrim interrogates the fox, who gives them a false lead. They throw him aside and run off to continue their search, unaware that their targets are nearby.

The Pevensies and the beavers escape and make their way to the Stone Table, where the noble lion Aslan is preparing their army. However, the Secret Police find out about the fox's deception and recapture him, bringing him before Jadis, who kills him before sending the Police back out.

The Secret Police manage to track down and catch up to the Pevensies on a frozen waterfall, where they confront them. Maugrim intimidates Peter, but the waterfall thaws suddenly and sends all the characters down river, with the Pevensies and the beavers able to escape on a piece of ice. Some of the wolves presumably drown or flee, but Maugrim and his second in command Vardan continue their hunt.

Though the Pevensies make it to Aslan's Camp and begin working with their army, Maugrim and Vardan find them and attack Lucy and Susan while they are bathing in the river. The girls escape into a tree, and Peter arrives to fight. Aslan detains Vardan, and Peter confronts Maugrim. Maugrim attacks, but Peter is able to run him through with his sword, killing him, so the Secret Police lost it's leader. Aslan releases Vardan, who flees. Some Narnian soldiers follow him to the White Witch's Camp, where they rescue Edmund and deliver him back to his family.

It is unknown what happened to the majority of the Secret Police after Jadis' death at the First Battle of Beruna, though the organization was dissolved.

Though it is unknown if they are the same ones as the ones from the Secret Police, some wolves fought alongside the Pevensies and the other Narnians during the Narnian Revolution in Prince Caspian. 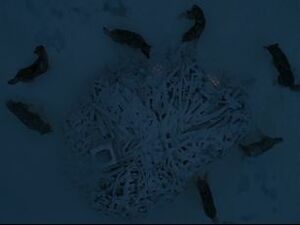 The Secret Police surrounding the dam. 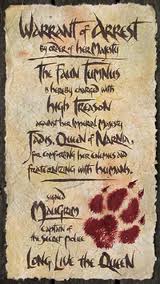 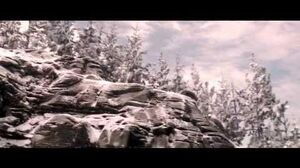 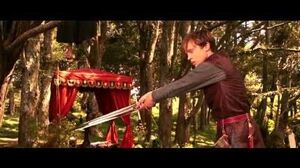