Escape Movieland and take over the real world.

}}Jadow is an organization of villains that seek to escape Movieland and take over the real world. They serve as the main villains of the video game and anime, Viewtiful Joe.

The members of Jadow had fought the superhero, Captain Blue, for control of Movieland for many years. However, they eventually found out that the world they inhabited was fictional. When celluloid film became obsolete, Jadow would be left behind as well and thus, under the leadership of King Blue, they made a plan to escape into the real world and take it over. To this end, Jadow kidnapped Joe’s girlfriend, Silvia, who was the daughter of the creator of their movies, since they needed her DNA to escape. However, Joe, having been granted superpowers by Captain Blue, defeated the members of Jadow one by one and saved Silvia.

Biankies are robots that serve as the main grunt soldiers of Jadow and fight hand-to-hand. Not much of a threat on their own, they attack in groups and the only sounds that they make are strange computerized grunting noises. In the anime, Biankies just say “Eh” and Joe has said that one can speak Bianky by thinking about what you want to say and speaking.

Bianky Primas are ballerina-based Biankies and their signature method of attacking is spinning around at high speed, then kicking. However, Joe can deal with this by using slow to catch them in between their spins. Primas have also demonstrated the ability to work together to create giant tornados.

Bianco Billys are a special type of Bianky who are based on cowboys. They attack with a pair of handguns and drop kicks, but Joe can use slow to punch their bullets back at them. Bianco Billys are most likely named after “Bronco Billy”, the titular character from a movie starring Clint Eastwood.

Verdys are flying Biankies that come in two types: Verdy-Jet, which has a jetpack, and Verdy-Chopper, which has a helicopter propeller on its back. They attack with missiles and bombs, but if they are knocked out of the air, they can fight hand-to-hand.

Rosettas are female-based Biankies who use hand-to-hand combat, as well as energy shields to protect themselves. They also use dive kicks and can suddenly drop to the ground to generate energy shockwaves. Rosettas also make sexual noises as they fight.

Red Leaders are elite Biankies who wield swords in combat and are dressed like royal guards. They can slash at enemies with their swords and also spin them to summon a barrage of swords to fire at Joe.

Bianky Boxers are tougher than the common Biankies with more armor to protect themselves. As their name suggests, they also have spiked boxing gloves that let them hit harder.

Cromarties are elite Biankies that come in four types. The first (standard Cromarties) fights hand-to-hand and can fight better than common Biankies. The second is Cromarty-Grenade, which uses a grenade launcher and the third is Cromarty-Bazooka, which has a bazooka as its weapon. The last is Cromarty-Surfer, which rides on a hover board and they attack Joe while he’s on the Six Machine using bazookas.

Gelbies are hulking, brutish Biankies, which can deliver powerful punches against their enemies. They also throw rocks and can perform a powerful attack where they leap into the air spinning, damaging whoever they hit. However, Gelbies are somewhat dimwitted since, if Joe slips behind them while they’re attacking, they completely lose track of where he is, leaving them open to attack.

Black Leaders are Cromarty versions of the Red Leaders and are a good bit stronger. They also use more combat knife-based swords.

The Metal Leos are robots modeled after Fire Leo, except that the only fire power they have is breathing fire. They fight primarily with their claws, such as spinning around similar to the Bianky Primas, and suddenly swiping, and use shields to protect themselves.

The most elite of the Biankies, Joker always appears with his slot machine. He uses attacks taken from the other Biankies, such as Bianco Bily's gun attacks, a version of Bianky Prima's spin attack, where he disappears briefly before striking, and Red Leader's sword stabbing attack. In a few of his encounters with Joe, Joker can also use his coin to activate his slot machine and make bombs fall. In each of their encounters, Joe has to defeat Joker to use his slot machine, which he needs to do to move on.

Black Thunders are helicopters used by Jadow’s forces. They have machine guns attached to them that they use as their primary weapons and can also release squads of Biankies.

The name says it all. These are tanks used by Jadow’s forces to back up their foot soldiers and can fire powerful explosive shells, as well as use a sudden burst of speed to charge Joe. The tanks can also release Biankies and on Jadow’s space base, there is a version called the Space Tank, which fires energy blasts instead of shells.

Harriers are jets used by Jadow, which are similar to Black Thunders. They can use machine guns as their primary weapons and can release squads of Biankies. However, the Harriers are also equipped with homing missiles.

Die Fighters are fighter space ships used by Jadow's forces that are found on Jadow's space base. King Blue also summons them in his final battle with Joe. The Die Fighters are meant to be a parody of the Tie Fighters from the Star Wars movies. 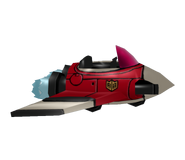 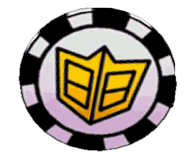 Add a photo to this gallery
Retrieved from "https://villains.fandom.com/wiki/Jadow?oldid=3537879"
Community content is available under CC-BY-SA unless otherwise noted.