To become Emperor over Tamriel

Due to his Merish blood, Jagar practised magic considerably, eventually joining the Imperial Legion as a Battlemage.

He learnt of the location of the legendary Staff of Chaos, a stave that held immense power, including but not limited to, opening portals to Oblivion and completely obliterating mortal bodies.

He took the staff to the Imperial Palace where he used it to banish Emperor Urien VII to Oblivion, he then used powerful illusion magic to assume the form of the Emperor.

However, his apprentice, Ria Silmane, had witnessed this and threatened to tell the Elder Council of Tharn's treachery, Tharn obliterated her and continued assuming his newfound, dictative rule.

He eventually got his hands on another rare artifact, the Jewel of Fire, which supposedly was the remains of a star that had fallen to Nirn. He placed his very lifeforce into the artifact and then drained the power of the Staff of Chaos into the crystal too. To ensure that his power was never taken, he split the staff into eight pieces and scattered them across eight provinces.

In 3E 399, one of Jagar's prisoners escaped with the help of Ria Silmane's ghostly remains. This prisoner went on to collect all eight pieces of the staff, evading Tharn's armies all the while.

Tharn considered making the person general of his armies but it became clear that he could not be turned and instead aimed to destroy him at every opportunity. He met the hero in the Imperial Palace where he removed his magical guise of emperor and fought him with all of his magical might, however he was defeated by the hero and instead cacooned himself in an impenetrable, magical shield whilst he recovered. While in this state, the hero found his precious Jewel of Fire and touched the repaired Staff of Chaos to it, the sudden exchange of great power destroyed both the jewel and the staff, this released Urien VII from Oblivion and destroyed Tharn. 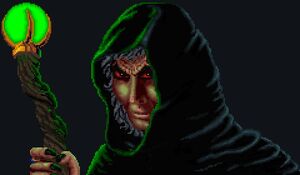 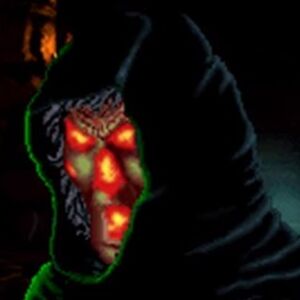