Executioner
Bodyguard/Butler (To The Warden)

Robotic Vigilante
Jailbot is one of the two main protagonists (alongside the Warden) of the 2007 Adult Swim animated series Superjail!.

Jailbot is a robot created by The Warden to build Superjail and made to carry out various tasks around SuperJail, where he serves as both a guard and a servant to The Warden.

He is portrayed as being almost invincible in combat, and filled with more weapons that should logically be able to fit into his body.

Jailbot is seen at the beginning of every episode capturing Jackknife (a character who can be seen escaping in ever episode). He will usually apprehend him an an unnecessarily violent fashion, and usually causes more harm than good, having no regard at all for civilians and even kills them if they try to stop him or are just in his way. Jailbot does, however, show an affinity for children, often giving them sweets when he apprehends Jackknife.

It is possible that his affinity for children stems from his own self-identity as a young child, as shown from Jailbot's dream in "Dream Machine", where Jailbot dreams of himself as The Warden's son.

Despite his many technological advancements, it's implied throughout the series that Superjail is not only severely outdated when compared to other robots such as Nova, but he's also almost entirely unprotected when it comes to hackers. In the episode "Cold-Blooded", The Twins were able to effortlessly control him and then use him like a video game character to attack everyone they came across in Superjail.

Another on of Jailbot's helpful features with catching criminals is his ability to disguise himself as not only any inanimate object he chooses, but also people that are so convincing, nobody would be able to tell it's him until he reveals himself. Jailbot has disguised himself as slot machines, stripper poles, pool ladders, a sultry southern woman in "Cold Blooded", a breastfeeding mother in "Uh Oh, It's Magic", as well as countless other inanimate objects and people.

The Warden: As stated above, Jailbot is completely loyal to The Warden, to the point where he looks up to him as if her were his biological father. Whenever The Warden gets into danger, Jailbot will always spring into action to save him before doing anything else. Whenever The Warden gives Jailbot an order, he also obediently follows without question and with deadly efficiency and determination.

Jared and Alice: Jailbot is not seen interacting with The Warden's two underlings very often, but it's made clear throughout the show that they are all on good terms, considering Jailbot to be a good friend of theirs and vice versa, with Jailbot even rescuing them a few times after saving The Warden, such as during the destruction of Fight City.

Jackknife: Jailbot and Jackknife for the most part have a very antagonistic relationship, with Jailbot regularly and excessively punishing Jackknife for his crimes before bringing him into Superjail. However, during the episode "Best Friends Forever", it's established that the two do have a modicum of respect for one another. After Jailbot is nearly destroyed by one of the monsters that usually guard Superjail from outsiders during the intro, Jackknife manages to save Jailbot and spend the entire episode helping each other survive and return to Superjail. Once they reach it however, Jailbot does Jackknife a favor and sets him free, smiling as he watches him swim away into the ocean.

The Trouble with Triples 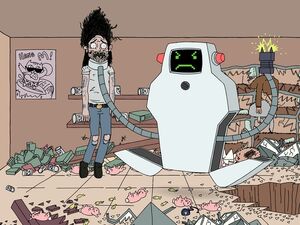