Hegemony
The Jamahl are an army of invaders from another dimension and the main antagonists of Juukou B-Fighter. They come to Earth seeking to conquer it but are opposed by the B-Fighters.

The Jamahl's arrival was first sensed by the insects of Earth, who began frantically buzzing around to warn everyone of the coming invasion, but their behavior only left human scientists curious about why they were acting in such a way. Soon after the Jamahl came to Earth and sent out waves of Jamahl Fighters to attack humankind as a vanguard for their invasion. The ruler of Jamahl, Gaohm, soon eyed a particular building that he believed would make an ideal Earth headquarters for them and sent his three generals, Jera, Gigaro and Schwartz, to lead an army of Jamars to take it. In the process, the Jamahl captured numerous humans to be used as slaves.

In response to the Jamahl's attack, the Earth Academia hurriedly developed a trio of suits to be used against the invaders, but had difficulty completing them. However, recognizing humanity's tenacity and willingness to fight to defend the planet, the wise bug sage Guru appeared and summoned a swarm of bugs to empower each of the three suits, turning them into the B-Fighters and creating the B-Commanders that would allow three humans to transform into them. The first B-Commander was given to one of the researchers who worked on the suits, Takuya Kai, while the other two went to Daisaku Katagiri and Rei Hayama, two humans who had stood up to the Jamahl to protect a rhinoceros beetle.

After the continued failures of his commanders to defeat the B-Fighters, Gaohm sent them all down to Earth to each fight one of the B-Fighters in a last attempt to prove themselves. After the B-Fighters repelled them all, Gaohm, curious about their power, descended to Earth to fight them personally. Gaohm proved himself to be much stronger than each of the B-Fighters, but allowed them to stab him in order to fully get a taste of what the source of their power was. Though he appeared to have been killed, Gaohm immediately resurfaced as a giant torso floating in space. Having discovered that the source of the B-Fighters' power was none other than the insects he had earlier dismissed, Gaohm sought to create a living weapon to counter them.

In pursuit of this, Gaohm summoned Sorceress Jagul, a legendary Jamahl sorceress who had entered slumber 300 years ago, and instructed her to create an evil B-Fighter. After gathering swarms of insects, and using a DNA sample from Takuya, Jagul was able to create an evil clone of the B-Fighters called "Black Beet".

The Jamahl Fortress is the headquarters of the Jamahl. It resembles a stone claw and is capable of opening up to deploy Jamahl Fighter jets. It is also used to store Jamahl's super-weapons.

Jamahl Fighters are wasp-like fighter jets used by the Jamahl for aerial combat. They are piloted by Jamars and each armed with a tail with a drill on the end, that is capable of folding forward so the drill can be shot off and used as a tool of bombardment. They are deployed in large numbers and typically fly in formations of three. 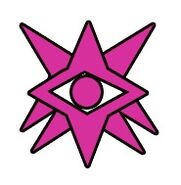