James Brode is a minor antagonist in the 2017 Netflix original film Death Note, which is very loosely based on the anime and manga series of the same name by Tsugumi Ohba and Takeshi Obata. He is a violent kidnapper and Light Turner's third victim.

He was portrayed by Jesse Stretch.

Though most of Brode's past remains a mystery, it is known that he had a wife and a few children. However, he and his wife apparently divorced. This was most likely the motivation behind his attack.

James Brode attacked a group of people, holding them hostage in a building at gunpoint. He was confronted by Seattle police and SWAT teams, but would not come out of the building.

It was during this time that Light Turner had gotten possession of the shinigami Ryuk's Death Note. After finding out how to kill people with it, he kills school bully Kenny Doyle and the criminal Antony Skomal. He then proceeds to show the book off to Mia Sutton, and to demonstrate its capabilities, pulls up a live feed of Brode's situation, then writes down that he will come out of the building, perform a military salute, and be killed by being struck by a SWAT van. As Light and Mia look on, Brode comes out with a hostage at gunpoint, but then releases her, gives a military salute, and is killed by a SWAT van striking him.

After the event, police assume Brode's actions were caused by drug use, but private detective L finds that he was not intoxicated and the broadcast was only shown in Seattle, giving him whereabouts as to the criminal killer Kira (Light's) location.

In the VR teaser video for the film, the viewer sees a situation through Light's eyes, with the footage from the film of the incident and Light killing the person off. Though it is the scene from the film, the person's name is Niel Wray instead of James Brode. This video is non-cannon due to that fact.

Not much is known about James Brode's personality other than he is wrathful and violent, and is not above attempting to kill his innocent people to take out his anger and revenge. He is also shown to be stubborn and resistant, as he would not even yield to armed police and SWAT officers.

James Brode with a hostage. 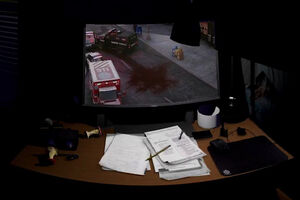