James Earl Cash is the main protagonist/anti-hero in the controversial stealth/horror game Manhunt.

He was voiced by Stephen Wilfong.

Sometime before 1992, Cash was wanted by the San Andreas Police Department, which is likely what caused him to abandon his family. It is indicated that he was part of an organized crime ring, assumed to be either an enforcer or a hitman, due to the fact that only murder would get him the death penalty.

Indeed, Cash was already a proficient and highly experienced killer before the events of the game. During his career as a criminal, Cash has been evading the law for a decade, until the year 2000 when he was finally caught in Carcer City and locked away in Darkwoods penitentiary. Cash was then sentenced to death, the execution being three years later.

The day of the execution, Cash is given the lethal injection and everyone in the world believes he is dead. However, he wakes up inside a closed down Coffee and Donuts store in Carcer City, come to find he was only sedated due to the works of Lionel Starkweather, who had bribed the prison officials.

Cash is then forced to participate in one of Starkweather's snuff films in exchange for his freedom. Cash has no trouble in killing a gang called The Hoods as he plows through the town and killing them in brutal ways until he thinks it's over, but he's ambushed by the Cerberus, who work for Starkweather and Cash is taken to another location.

Cash is then dropped by the Cerberus at Denton's Junkyard, where he must kill a gang of white supremacists called the Skinz. Cash kills them all as he makes his way through the location, using a crane to clear the path ahead and makes his way to the exit. He is once again forcefully picked up by the Cerberus and driven to the next location.

Next, Cash must face a gang of war veterans and insane hunters known as the Wardogs at the City Zoo where he learns they have his family hostage. He manages to save at least one member (depending on the player's abilities) and kills all the Wardogs at the location.

Cash then arrives at the mall, where Starkweather has arranged a "screening" for him. He must find a tape and a video camera in the Carcer City Mall, while being attacked by a gang called The Innocentz, made up of child-like pedophiles and satanists. Once all the gang members are dead, Cash watches the tape which turns out to be footage of his remaining family members getting killed by an Innocentz member with a machete. Cash angrily picks up the television and throws it to the ground, breaking it.

Now Cash is back out on the streets and is teamed up with a homeless man, where Starkweather instructs him to escort the Tramp to the cemetery, while killing more Innocentz on the way. Then he must clear out the remaining Innocentz at the Carcer Chemical Factory and on his way out. Cash makes a run for it, but is caught again by the Cerberus team.

Cash is then taken back to Darkwoods Penitentiary to face his former fellow inmates who have taken over the asylum after killing all the guards and calling themselves The Smileys. Cash makes his way through the asylum killing all the Smileys, until coming across the White Rabbit, whom Cash is told to follow by Starkweather. The White Rabbit leads Cash into many traps, where he is repeatedly attacked by the Smileys, until he enters one room filled with heavily armed Smileys which is the point where Starkweather had planned for Cash to die (thus betraying him). However, Cash manages to stay alive and kills the remaining Smileys, some of the Cerberus, and the White Rabbit as he escapes.

Now Cash is on the run from Starkweather, who sends Ramirez out to capture Cash, which he does, but decides to toy with him at first. Cash is placed in a fenced-out yard outside the Wardogs' apartment building for the Wardogs to hunt him down for sport. Cash kills those in his way and enters the apartment building, killing the remaining Wardogs and Ramirez in the process. After killing Ramirez, Cash escapes the location where he's then picked up by a journalist.

The Journalist and Cash make their way to her apartment and Cash lets the Journalist get her evidence to bring down Starkweather, while killing the CCPD along the way who are following the orders of the corrupt chief of police Gary Schaffer, who was paid off by Starkweather. After taking all the evidence the Journalist needed, Cash tells the Journalist to get out of town, to which the Journalist seems to disagree with Cash's decision at first (as the Journalist says "But, you are not coming with me!", when Cash tells her to leave) but Cash explains that if he's killed then she can still expose him. Cash decides to head to Starkweather’s Estate via the subway, making it all the way to the Train Yard where he is cornered by Carcer City's SWAT team. However, the Cerberus team kills all the SWAT, and has Cash recaptured.

Afterwards, the police soon show up in Starkweather's estate. The police discover the many corpses of the Cerberus, Starkweather, Piggsy, and his snuff film ring. However, Cash has already made his escape and he's nowhere to be found.

Cash went into hiding after killing Starkweather, as he was supposed to be executed. When the Journalist tells a psychiatrist that Cash is still alive, the psychiatrist reveals that no one has seen Cash since his "execution" two weeks before the Journalist was committed to a psychiatric hospital. This confirms that Cash created a new fake identity to cover up his criminal record in order to start a new life. His whereabouts and current activity are completely unknown/unconfirmed.

Cash remains rather emotionless and completely fearless throughout most of the story line, however, he does display some sympathy for his kidnapped family members during one scene, and is furious when he sees them killed.

Cash is an extraordinarily dangerous individual, capable of inflicting fatal injuries using the most simple objects, such as a plastic bag. This is likely the reason why Lionel Starkweather chose him to star in his snuff movies, though presumably he eventually got bored with him and decided to kill him for that reason, much as he locked away Piggsy.

Cash helped the female journalist by escorting her safely to her apartment, before telling her to get out of the city while she can, showing that he's good enough to allow an innocent person who has witnessed him commit multiple murders escape unharmed. This could be simply because James has a strong sense of vengeance within him, so he would do anything to ruin Starkweather, as James said to the journalist; "You're my backup if I don't make it." 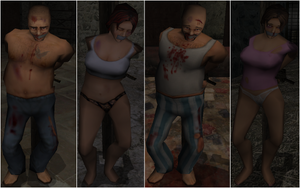 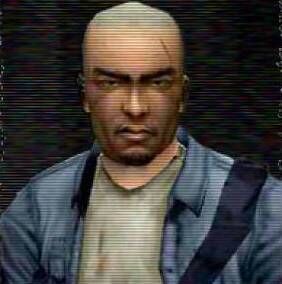 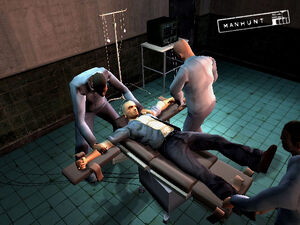 Cash before he is "executed" and forced to play Starkweather's star 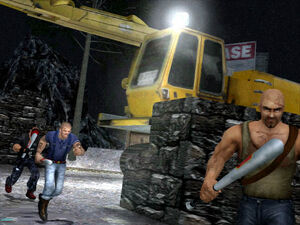 Cash's possible new business
Add a photo to this gallery

Retrieved from "https://villains.fandom.com/wiki/James_Earl_Cash?oldid=4214071"
Community content is available under CC-BY-SA unless otherwise noted.