James Gillies is a recurring antagonist in Murdoch Mysteries.

He was portrayed by Michael Seater.

James Gillies and Robert Perry were highly intelligent students when it comes to physics. Gillies schemed a device to kill Professor Samuel Bennett.

Once Detective William Murdoch arrived on Campus to investigate Professor's murder, Gillies and Perry both joined detective seemingly helping him to discover who was responsible for the murder.

By time Detective started to suspect the two students, they correctly deduced that Perry is weaker than Gillies and tricked him into believing that the latter was trying to kill him for his knowledge of the murder.

Believe he is convicted, to save himself from hanging, Perry confessed to the murder revealing Gillies as his partner and mastermind behind the murder. When the Murdoch revealed to Perry that he was tricked, the latter was shocked and both students were arrested by the police.

In the end, Julia Odgen asks Murdoch if she is to assume that Mr. Gillies and Mr. Perry will hang, Murdoch, replies that "Their families will hire the best lawyers in the land. But at the very least, they can look forward to life in prison.". Julia then asks what was their motive, Murdoch responds that Gillies had a theory and wanted to test it (Applied physics) and Mr. Perry, for whatever reason, went along with him.

A Midnight Train to Kingston

Gillies is transported on a train to Kingston to be ultimately hanged for his crimes.

Eventually, he is able to escape during the chaos. Murdoch catches up with Gillies and beats him up until the latter tells him to stop. He tells Murdoch that this is the last time for them both and asks him if that doesn't mean that Murdoch is a little bit sad, the latter responds that no. Gillies tells him that he will miss him before he kisses the detective and punches him.

Later, Murdoch is found unconscious by Inspector Thomas Brackenreid and Dr. Julia Ogden, Murdoch questions the constables if they found Gillies, they deny but Crabtree tells Murdoch that "river gets fast and deep down there. If he was still handcuffed, "there's no way he could escape his death". Julia tries to convince a desperate Murdoch that they have to believe that it is over. 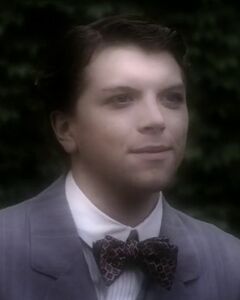 Add a photo to this gallery
Retrieved from "https://villains.fandom.com/wiki/James_Gillies?oldid=3557403"
Community content is available under CC-BY-SA unless otherwise noted.