Wealthy Abuser
James Haggin is the anti-heroic tritagonist of Disney's 1962 live-action film Big Red. He is a wealthy sportsman who hopes to make Big Red a champion show dog.

He was portrayed by the late Walter Pidgeon, who also played one of the Cattlemen in Disney's 1962 film The Legend of Lobo.

Rene Dumont, a 14-year-old orphan who lives in the woods of northern Canada, is hired to exercise Big Red, a champion Irish setter that belongs to James Haggin. When the dog becomes so attached to the boy that he refuses to take orders from anyone else, Haggin separates them. In a desperate effort to return to Rene, Big Red is seriously injured, and Haggin decides to have the animal put to sleep.

Rene takes the dog away, nurses him back to health, and then reluctantly returns him to Haggin, who offers Rene his old job. When Rene refuses, Haggin, hurt by the boy's rejection, ships Big Red and his mate, Mollie, to Montreal for sale. The two dogs escape from the train and disappear into the pine forest. Rene finds them in a cave where Mollie has given birth to a litter of puppies. Meanwhile, Haggin realizes his growing affection for Rene and pursues them, but he is thrown from his horse and trapped in a rocky gorge.

Big Red and Rene arrive in time to save him from a menacing and dangerous cougar. As they head for home, Haggin offers to adopt Rene, and the boy, knowing that he will never again be separated from Big Red, gladly accepts. 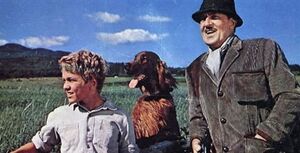 Haggin with Rene and Red. 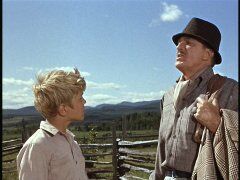 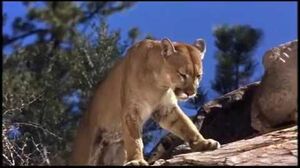