Expert in biology and virology
Command of the T-Virus leeches

Plotting to bring down Umbrella.

See Umbrella Corporation fall for having him killed.

James Marcus is the main antagonist of Resident Evil 0. He was one of the original founders of the Umbrella Corporation and creator of the original t-Virus, as well as was the person behind the t-Virus outbreak in the Arklay Mountains.

He was voiced by Hiroshi Ito.

James Marcus met Edward Ashford at school and proved to be an expert in the fields of biology and virology. After the two left school, they became research partners into the Progenitor virus and enlisted the aid of one of Ashford’s closest friends, Ozwell E. Spencer who provided funding for them until they discovered the Progenitor virus in 1967. Marcus and Spencer wanted to create a biological weapon for military usage, while Ashford was simply interested in the research, no matter what the consequences were. To mask what they were really doing, the three formed the Umbrella Corporation and made massive profits, also gaining government authorization to continue their research. Their true motives were hidden under the mask of a pharmaceutical company that was dependable, benevolent, and respectable that soon became quite powerful and influential.

In 1968 Marcus became the General Manager and Director of Research and Development and was made the head of the Management Training Facility. While Ashford lent his assistance, Spencer handled the corporation’s finances, with Ashford dying later that year when he contracted the Progenitor virus.

Creation of the T-Virus

Marcus kept researching the virus and in the January of 1978, created the t-Virus through combining the DNA of a leech with the Progenitor virus. This would later lead to the creation of the G-virus and Umbrella’s B.O.W.s. This breakthrough earned Marcus great attention and prestige from those around him, though Spencer was beginning to grow wary of him. Marcus became quite close to two of his researchers, Albert Wesker and William Birkin, and began teaching them to become responsible scientists. He sought to use his discovery to become a member of Umbrella’s board of directors, but before Marcus could present them, Spencer closed down the training facility and transferred the t-Virus project to the Arklay Research Facility. Despite this, Marcus continued to work at the training facility and, during the 80’s, was all but confined there. He continued to experiment with the t-Virus and learned of its potential, also creating the first B.O.W.s. But Marcus’s isolation took a heavy toll on his mental state and he began using his own assistants for his experiments.

Finally Spencer’s paranoia grew too great and he commanded Wesker and Birkin to assassinate Marcus when he least expected it. On a Monday in 1988, two Umbrella Security Service soldiers stormed Marcus’s lab and shot him down. Wesker and Birkin taunted their former mentor as Marcus bled to death and as they left, his body was thrown into the facility’s sewage plant. But he did not remain dead, since at the time he had been attacked, Marcus had been experimenting with a live t-Virus leech that escaped from containment when gunfire broke it. It had entered his body through his mouth and bonded with him, allowing him to regenerate into something beyond human. Marcus was reborn with the physical body of himself in his early 20’s and learned to control and manipulate the leeches, thinking of them as his children.

Marcus swore vengeance on Spencer and all of Umbrella for taking away his humanity. He unleashed his t-Virus, first on the Arklay Research and Management Training Facilities, then on the Ecliptic Express, a company train. Every passenger was killed and transformed into zombies by the t-Virus. Marcus then got rid of the USS commandos to clean up the mess and sent a transmission to the area of the training facility where Wesker and Birkin were hiding from the zombies and threatened them that they would pay for their betrayal.

When Rebecca Chambers, a member of S.T.A.R.S. Bravo Team, and Billy Coen, an Ex-USMC Second Lieutenant, got caught in the chaos Marcus had unleashed, they encountered creatures that mimicked Marcus within the train and the training facility. Eventually Rebecca and Billy met up with Marcus, who revealed what was going on and why he was doing all this. Marcus then mutated into the Queen Leech and, although this creature proved immune to small-arms fire, the two weakened it with sunlight and Billy finished it off with one shot. Though Marcus did not realize it, he had set into motion the events that would lead to the destruction of Raccoon City, as well as the downfall of the Umbrella Corporation and Spencer becoming one of the world’s most wanted fugitives, gaining Marcus his vengeance on Spencer and Umbrella after all.

James Marcus possessed high levels of intellect, particularly in biology and virology and after his revival with the t-Virus, he can control the t-Virus leeches. As the Queen Leech, he can climb on walls, as well as lash with his tentacles and possess high levels of strength. In his second form, the Queen Leech can unleash more powerful brute force attacks and spit acid from his back. However while Queen Leech is resistant to weapons, it can not stand sunlight. 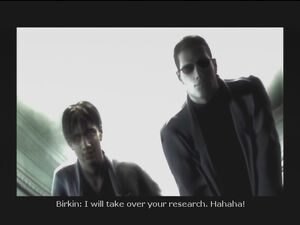 James Marcus being assassinated by Albert Wesker and William Birkin 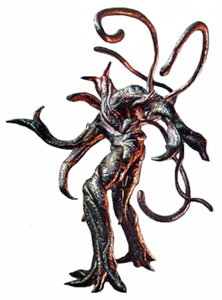 Queen Leech in its first form 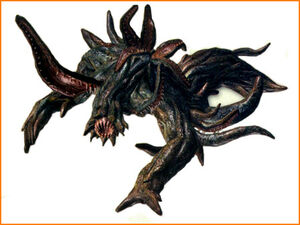 Queen Leech in its second form 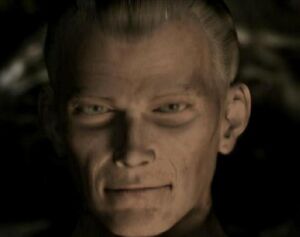 Marcus, as he replicated by the Queen Leech. 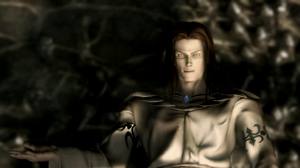 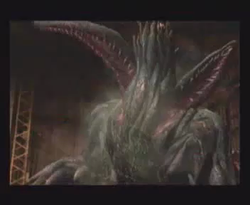 Retrieved from "https://villains.fandom.com/wiki/James_Marcus?oldid=3562137"
Community content is available under CC-BY-SA unless otherwise noted.