James Moriarty (A Game of Shadows)

Professor Moriarty
Napoleon of Crime
The Professor
The Doctor
The Devil

Professor of Mathematics at Cambridge University

Eliminate Alfred Meinhardt and take over his company (both succeeded).
Ignite a world war between France and Germany so that he can profit from it.
Kill Sherlock Holmes and his companions (both failed).

He is an academic genius, celebrated author and professor of mathematics at Cambridge University. In secret, however, he is a terrorist and criminal mastermind looking to ignite a world war between France and Germany which he can profit from. He is also Sherlock Holmes's archenemy.

In the 2009 film, he was voiced by the late Andrew Jack. In Sherlock Holmes: A Game of Shadows, he was portrayed by Jared Harris, who also played Mac McGrath in Mr. Deeds, David Robert Jones in Fringe and Axel Bellman in The Shadow in the North.

Moriarty discretely hires Sherlock Holmes' former lover and antagonist, Irene Adler, to discover the whereabouts of missing scientist Luke Reordan - ironically by hiring Holmes. Moriarty is aware that Lord Henry Blackwood is coordinating the construction of a groundbreaking device that is controlled via radio—the receiver being a component he is eager to obtain for financial gain. After Adler successfully hires Holmes, she later rendezvouses with Moriarty in a carriage, which an incognito Holmes purposefully stumbles into while attempting to eavesdrop on the interview. Moriarty silently threatens Holmes at gunpoint, driving the detective away. Adler soon becomes overwhelmed by her mission and attempts to flee via train, but Moriarty ominously confronts her aboard the boxcar and coerces further service from her in exchange for Holmes' life.

After Blackwood's plan goes awry and he is killed, Moriarty makes his move by impersonating a police officer, he approaches the scene of the crime where the device has been located, murdering the stationed officer with his pistol and leaving with the radio receiver in tow.

During the film, Sherlock Holmes comes into conflict with Moriarty after the latter poisons Irene Adler to death, deeming her expendable after she succumbs to her feelings for Holmes. During his inquiries into Moriarty's criminal activities, Holmes learns that the professor had managed to "buy, scheme or murder" his way into various businesses, including arms and chemical weaponry, without leaving any criminal evidence that could be traced back to him. In order to create a demand for his vast supply of weaponry, Moriarty attempts to provoke a world war using bombs and by sending an assassin into a crucial conference using an early form of plastic surgery. At one point in the film, Moriarty captures Holmes and tortures him while singing the German song "Die Forelle" by Franz Schubert.

With Dr. John Watson having deduced his assassin's identity in Switzerland while Moriarty is occupied in a chess game with Holmes, Moriaty's plan to ignite the war seems to be thwarted. However, Moriaty states an undeniable truth is that no matter what, a world war is inevitable due to human's thrist for conflict, which is very true since World War 1 is gonna happens one way or another. As the result, the failed assassination is only a temporary setback to his plan and he just seemingly waits until the war starts and profit from it. Holmes then reveals to Moriarty that he had managed to switch the professor's personal diary containing all the information on his empire and investments with a replica. Having cracked the code needed to decipher his handwriting, Holmes had sent the diary back to London for his colleagues to work on, reducing Moriarty's enormous fortune to practically nothing. Moriaty tried to get into his pocket to get his diary only to realize his diary is now a replica with Holmes's mocking picture depicting a fisherman being swallowed by a shank with a word Be careful what you fish for.

Infuriated by having lost the fortune he worked so hard to get, Moriarty responds with evidently seething anger but still remaining calm by telling Holmes that he will develop the most excruciatingly painful and slow ways to kill both Watson and his wife in retaliation for what Holmes has done to him and soon he and Holmes calculate a potentially oncoming violent altercation. Moriaty proves to be able to predict accurately the scenario of the fight as well as Sherlock could and Sherlock realizes that he would inevitably lose a fight with Moriaty due to an injury in his shoulder sustained during his recent torture by Moriarty. Wanting to protect Watson from Moriarty's revenge, Holmes instead grapples Moriarty over the balcony and they both tumble into the Reichenbach Falls, while a horrified Watson watches from afar. Holmes is later shown to have survived the fall, presumably due to having taken his brother Mycroft's oxygen breathing apparatus with him, while Moriarty is most likely dead.

However, a third Sherlock Holmes film has recently been announced, implying that Moriarty could return.

When Sherlock Holmes first happens across Moriarty, the professor is secluded in shadows, but can be seen wearing fine leather gloves, a Cambridge PhD hood and a top hat. He is armed with a spring-activated, small caliber pistol hidden up his right sleeve. Despite being cunning and upper-class, Moriarty fails to clean the residue chalk from his clothing. In person, the professor is a tall, elegant man with auburn hair and a beard.

Professor James Moriarty maintains the façade of a celebrated academic and author, while he is in fact infinitely devious. Due to his cautious nature, the vast sum of his criminal activities are virtually untraceable to anyone without access to his encoded notebook. While discussing his illicit conduct, Moriarty never directly acknowledges its explicit nature, always remaining seemingly hypothetical. He also shows a sadistic side, by torturing Sherlock with a meat hook, even going so far to move and shake him violently while Sherlock was hanging from his shoulder with the hook to causes him a lot pain, all this while Moriarty was singing some music. Moriarty was a gentleman, always keeping himself presentable and speaking pleasantly, even if he was speaking with someone he intended to kill. While generally calm and collected, he does have limits to his patience, finally losing his temper in the finale during his assault on Holmes but his rage is not blinded rage since he can control and channel his rage to analyze and counterattack Holmes mental and physical attack perfectly. Overall, Moriarty is a genius psychopath, concocting plans that are very hard to foil in which it's success will primarily benefit only him. 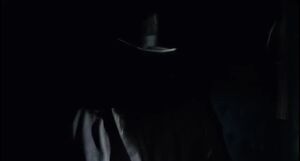 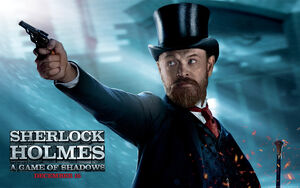 Moriarty in a poster of Sherlock Holmes: A Game of Shadows.

Professor Moriarty in Sherlock Holmes: A Game of Shadows.

Moriarty meeting Sherlock Holmes in person for the first time.

Moriarty watching a concert after staging an assassination.

Moriarty playing a game of chess with Holmes.

Moriarty's mental breakdown after learning of his entire fortune being stolen.

Moriarty vowing to Sherlock that he will kill Watson and his wife for taking his fortune.

Moriarty and Holmes fighting in an imaginary vision. 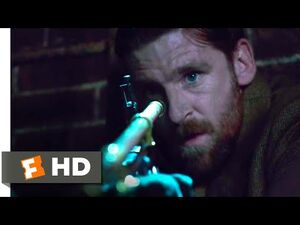 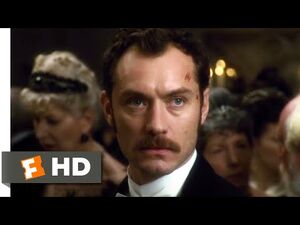 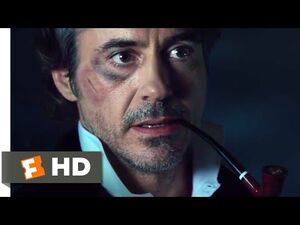 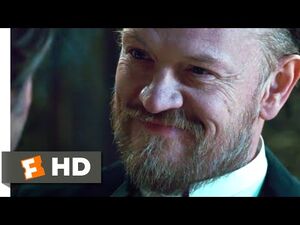