Working to steal the powers of the League.

Instigate a war between the British and German (failed).

The Fantom (also known as M) or better known by his real name James Moriarty, is the main antagonist in the 2003 film The League of Extraordinary Gentlemen.

He was portrayed by Richard Roxburgh, who also played Mr. Stamp in Mission Impossible II, Duke of Monroth in Moulin Rouge, and Count Dracula in Van Helsing.

In an alternate version of 1899, an enigmatic crime lord known as the Fantom is responsible for an attack on the Bank of England in London by a group of men (led by his second-in-command Dante) who appear to be German soldiers using advanced explosives, automatic weapons, and an armored tank. He instructed his men to leave one of the police officers alive to tell the tale as the rest are killed.

Next is an attack on a Zeppelin factory in Berlin and the kidnapping of several German scientists, by the same men, this time dressed as British soldiers. This instigates hostilities between the British and German governments, who are ready and willing to go to war with each other, which the Fantom hopes will grow into a World War.

In his guise as M, he recruits people to form a modern version of a group of talented individuals known as the "League of Extraordinary Gentlemen", who have aided the world in times of need. In this case, they will combat the threat of the "Fantom", the true mastermind of the current crisis. M says they can ensure world peace by stopping the Fantom from destroying Venice, where a peace conference is to take place.

The League is comprised of rugged adventurer and hunter Allan Quartermain, invisible thief Rodney Skinner, vampire and chemist Mina Harker, immortal aristocrat Dorian Gray, Indian pirate Captain Nemo, scientist Dr. Henry Jeckyll (as well as his brutish alter-ego, Mr. Edward Hyde), and American Secret Service Agent Tom Sawyer. During the voyage to Venice on Captain Nemo's submarine the Nautilus, it eventually becomes clear that there is a traitor on board when a camera’s flash powder is found in the ship’s wheelhouse and one of Dr. Jekyll’s transformation formulas goes missing. Skinner is accused of being the saboteur, but he is nowhere to be found.

Though the League reaches Venice in time, the bombs planted under the city start to detonate, toppling buildings in a domino effect and making the League believe that Skinner has sold them out. The League decides that knocking one of the buildings out of the sequence is the only way to stop the chain reaction and mass collapse. Nemo has a missile that can be fired from the Nautilus at the building in question, but only if a beacon can be set in place. Since Nemo can track his "automobile," allowing it to serve as the beacon, Sawyer drives the car past the chain of explosions, as Dorian Gray and Mina Harker disembark to fight the Fantom's henchmen ambushing them. Quatermain sees the Fantom and gives chase on foot. During the chase, the Fantom is unmasked and revealed to be M, who then escapes. At the same time, Sawyer crashes the car into the target building while firing a flare, which signals Nemo to launch his missile. The building is destroyed, the chain of explosions stops, and Venice is saved.

The League regroups at the Nautilus, where Quatermain reveals that M is responsible for the events. Ishmael also reveals that Gray, not Skinner, is the real traitor, as he himself was fatally shot by Gray after the explosion chain was stopped. Gray escapes in an exploration pod (a mini-sub), and Nemo sets the Nautilus in pursuit. A phonograph record made by M and Gray is found, revealing that the mission to Venice and the League itself were merely ruses to enable M to take physical elements from the supernatural members:

M then reveals that Quatermain was only used to capture Hyde, and finally reveals his plan to construct an army of soldiers and weapons based on their powers; M's goal is to amass enormous wealth by starting wars and selling his armaments and weaponry to the combatant countries. As the record plays, it releases an ultrasonic signal caused by crystal sensors that detonates three bombs set by Gray before his departure. Despite Nemo and his men's best efforts, the Nautilus is taking in too much water in the primary engine rooms because of the explosions. Fortunately, Dr. Jekyll transforms into Hyde again, and this time, he finally takes control of himself and prevents the ship from sinking by pulling one of the levers to drain all the water away from the engine room. Despite Hyde having saved the Nautilus, the League has lost track of Gray's pod. Fortunately, Skinner, who has revealed to have stowed away in Gray's pod, secretly sends in messages through Morse code to follow his lead.

Following Skinner's directions, the League eventually locates M's base of operations in the Asiatic Arctic, where they reunite with Skinner. At that point, Skinner reveals that M and his forces are building dangerous weapons based on their powers, and has the kidnapped German scientists to work on the weapons by having their families held hostage. Working together, the League split into achieving certain tasks: Skinner blows up the factory with bombs, Nemo and Hyde rescue the scientists and their families, Mina defeats Gray and kills him by exposing his painting to him. In the meantime, Quatermain and Sawyer confront M in his lair and reveal their deduction that M is none other than the infamous "Napoleon of Crime", Professor James Moriarty. They chase Moriarty around the fortress, and Sawyer is attacked by an invisible henchman named Reed and an unnamed flamethrower henchman. Skinner saves Sawyer by setting the flamethrower's gas supply on fire, but is badly burnt, though he survives. Despite Skinner's efforts, Sawyer is being held hostage by Reed. Meanwhile, as Quatermain is about to kill Moriarty, he sees Sawyer being held at knifepoint by Reed and chooses to save Sawyer by shooting Reed dead at the cost of being fatally stabbed by Moriarty, who then flees across the ice toward the stolen exploration pod. Sawyer, using Quatermain's rifle "Mathilda" and the marksmanship skills Quatermain taught him earlier, shoots Moriarty to his death, causing him to lose hold of a box containing his new weapons into the icy waters below. 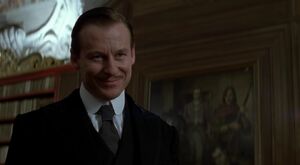 Moriarty recruiting the members of the League of Extraordinary Gentlemen. 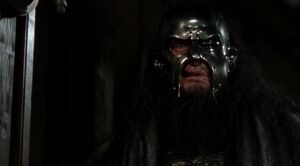 Moriarty disguised as the infamous Fantom. 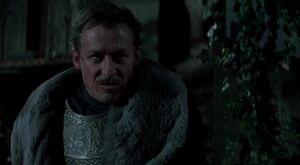 Moriarty revealing himself as the Fantom to Allan Quartermain. 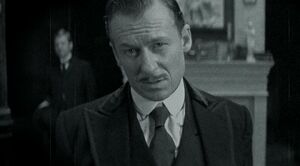 Moriarty revealing his plans to the League on an old film reel. 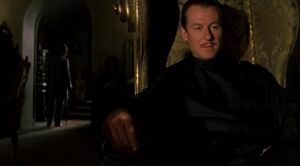 Moriarty speaking with his partner in crime, Dorian Gray. 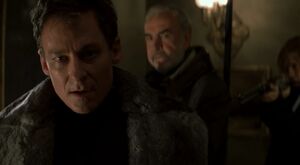 Moriarty being threatened by Quartermain inside his fortress. 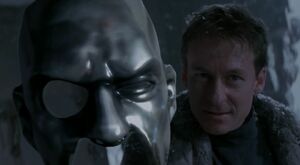 Moriarty about to flee from his fortress. 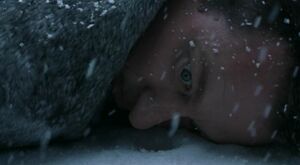