Profit from drug dealing on the island of Vilena while using the dictator General Garza as a puppet.

Kill the Expendables. (all failed)

James Munroe is the main antagonist of the 2010 film The Expendables.

He was portrayed by Eric Roberts, who also played The Master in the Doctor Who movie, Sal Maroni in The Dark Knight, Dr. Albert Beck from the Stalked By My Doctor films, Mongul from Justice League and Justice League Unlimited, Paul Snider in Star 80, Richard L'Italien in Oz, and Dark Danny in Danny Phantom: The Ultimate Enemy.

Munroe was once a CIA agent but eventually started working as a mercenary with General Garza, the dictator of the fictional island of Vilena, and planning to profit from drug dealing on the island. Munroe often humiliates Garza in front of his men and Garza becomes increasingly agitated with him. Mr. Church, a member of the CIA, soon hires the Expendables to find and assassinate Munroe.

Barney Ross and Lee Christmas, two of the Expendables, explore Vilena and meet Garza's daughter, Sandra. After a fierce battle with some of Garza's men, Barney and Lee manage to kill them but Munroe survives. He rightly suspects that Sandra had been helping them and that she is involved in a plot to kill him and Garza, leading him to kidnap and torture her. One of the Expendables, named Gunnar Jensen, had previously been dismissed from the group due to his unstable and overly violent nature, and Munroe offers him £100,000 in exchange for helping him to track down and kill all of the Expendables. Jensen goes after the group but ultimately fails.

Eventually, Garza stands up to Munroe after witnessing him torturing Sandra - mainly because she is his daughter but also because he believes Munroe had hired the Expendables to kill him. In response, Munroe shoots Garza dead and attempts to escape from the Expendables with Sandra as his hostage. However, Munroe's attempt to escape via helicopter backfires when the Expendables blow it up and Ross ultimately catches up to him just before he could run again. Holding Sandra at gunpoint, Munroe demands that Ross disarm himself, then shoots him in the shoulder before going on to rant about how he was the only CIA member who saw "the big picture" in drug dealing, and that Ross is practically no different than he is since they are both mercenaries. When Munroe questions Ross as to why he returned to kill him, Ross replies that he came for Sandra - who instantly manages to free herself from Munroe's grasp. Barney immediately shoots Munroe several times just as Christmas throws a large knife through his chest, killing Munroe as he falls onto the ground - dead. 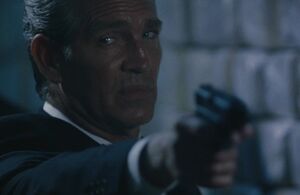 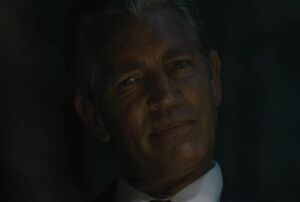 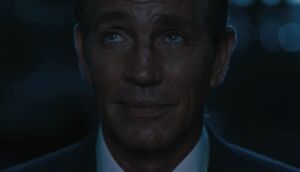 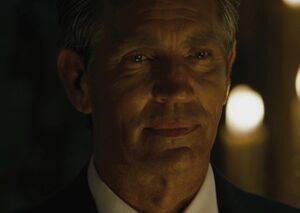 Munroe being confronted by General Garza

Munroe with a knife thrown through his chest