Manipulate John into continuing his work.

Kill Elizabeth, so that she can spend eternity with him.
Prevent any further killings at the hotel (all succeeded).

James Patrick March is a major antagonist in American Horror Story, serving as one of the two main antagonists (alongside the Countess) of the fifth season, Hotel, and a minor character in the eighth season, Apocalypse.

March is a millionaire and serial killer, and is directly responsible for the creation of the Hotel Cortez during the 1920s, having built it with the specific intention of using it as a venue for his murders - as well as a place to dispose of the bodies.

March is also original Ten Commandments Killer, having committed the first two murders; however, his designs of continuing the murders were cut short when the police learned of the killer's true identity through a tip-off, forcing him to commit suicide in order to escape arrest. However, his spirit lingered on in the hotel after his death, intent on finding a successor to continue his work.

Over the course of his century-long search for a successor, he was responsible for molding several of the Hotel Cortez's guests into some of the most infamous killers in American history, including Charles Manson, Richard Ramirez, Jeffery Dahmer, Aileen Wuornos, John Wayne Gacy and the Zodiac Killer. His newest target is series protagonist John Lowe, who March believes to be the best candidate for the role of the modern day incarnation of the Ten Commandments Killer.

He was portrayed by Evan Peters, who also portrayed Tate Langdon in Murder House, and Kai Anderson in Cult.

As a product of 1920s new money, James Patrick March is always impeccably dressed in tailored pinstriped suits, often augmented with bowler hats and walking canes - most of which usually conceal a blade of some kind. March's handsome features and immaculate 30's-era attire often lead others to compare him to movie stars like Clark Gable, especially thanks to his pencil mustache and clipped Brahmin accent. Having been dead since the 1930s, March does not age, firmly cementing the sense of timelessness.

The only time he can be seen out of his familiar uniform is during his more labor-intensive murders, during which he wears a heavy apron, a pair of gloves, and an elaborate mask - the latter to prevent any victims from seeing his face, the former to avoid chemical burns while in the process of dissolving bodies in acid.

However, like many ghosts, March's spirit has been marked by the wound that killed him: having killed himself by slitting his own throat, his ghost can be instantly recognized by the gaping wound across his neck, and March generally goes out of his way to hide this distinctive mark with an ascot - particularly while dealing with visitors who aren't aware of the supernatural.

Glibly charismatic and superficially polite, James Patrick March was able to keep his guests, workers and the general public oblivious to his true nature for many years prior to being unmasked, and even as a ghost, he is still in the habit of charming visitors to his hotel. Much of his mannerisms are only adopted affectations: having been born into poverty and achieved wealth on his own, March was determined to reinvent himself as a gentleman despite his status as a member of the noveau riche. To that end, he attended university, studied literature, architecture, theater, and regularly quoted works like Hamlet in order to show off; he even copied his tutor's Brahmin diction until he adopted it as his own accent.

Ultimately, his image as the perfect host is upheld even during the worst of March's crimes, and throughout his many acts of murder and torture, he can be seen smiling, laughing and chatting jovially with his victims right up until he kills them. Tristan Duffy, John Lowe and at least two unwitting foremen were completely disarmed by his well-mannered facade - to the point that Lowe even considers him a friend for a time. Incidents such as these almost always ended with the target of March's overtures being either corrupted into serving him or killed.

The only thing that can get him to abandon his disguise is anger: if annoyed or incensed, March can drop the well-mannered mask at a moment's notice and begin screaming at the top of his lungs; an easy way of getting on his nerves is to interrupt his monthly meeting with his Elizabeth, though getting him to lose his temper can be a simple matter of refusing to obey him - or even merely taking his lessons lightly.

As a psychopath, March's relationships are shallow at best, and often grounded in abuse and manipulation. Though he apparently considers his serial killers he tutored to be his friends, he's not above menacing, assaulting or psychologically toying with them if it allows him to sculpt them into individuals more to his liking, and shows little qualms about insulting them behind their backs - dismissively referring to Jeffrey Dahmer as a "poof." Similarly, though he claims to love Elizabeth, their marriage is extremely dysfunctional: his rescue of her is framed more like a kidnapping, and their continued relationship is barely cordial, to the point that March actually calls her a "perverted animal" - right to her face. More often that not, Elizabeth is treated as a henchwoman no different than Miss Evers, used and exploited at will in order to further March's designs for the Ten Commandments Killings. And when Elizabeth is killed in the penultimate episode of the season, March reacts with absolute glee when her spirit ends up trapped in the hotel alongside him, overjoyed at the prospect of being able to torment his estranged wife for all eternity.

For good measure, March can be very possessive of things that he considers his, and responds with considerable spite if he believes that his property has been violated. In one case, having selected John Lowe for the task of continuing his work, he erupts with rage when Hypodermic Sally allows John's suicide attempt by hanging, threatening to have Sally fed to the Addiction Demon unless she behaves. This sense of megalomaniacal ownership extends to his marriage to Elizabeth: upon discovering her relationship with Rudolph Valentino and Natacha Rambova, March had the two vampires kidnapped and imprisoned in a sealed-off wing of the hotel with no chance of escape, and expresses utter glee in observing Elizabeth's horrified reaction when she finally learns of what happened to them almost a century after the fact.

March despises religion, claiming it to be the worst thing in all the world, and even boasting of his intention to kill God at one point; the Ten Commandments Killings were his way of attacking God, and for this reason considered the completed work his magnum opus. He also went as far as to collect all the bibles from his hotel bed stands, and arranged them with a pile of his victims that he had left for the police. It's likely that he developed his hatred of religion as a result of abuse, having described his father as both a true believer and "the meanest son of a bitch" he'd ever seen.

However, March was a prolific serial killer for many years prior to taking up the Ten Commandments as a basis for murder, using a wide variety of methods in order to dispatch his victims: stabbing, lacerating, impalement, bludgeoning, shooting, immolation, and in at least two unfortunate cases, live burial behind brick walls. A sadist by nature, he liked employing both physical and emotional torture against his victims, having outfitted the Cortez with numerous dead-end hallways that would allow him to corner victims and savor their terror as he closed in for the kill. Most often, the murders were committed for no other reason than perverse enjoyment - although he occasionally made exceptions for people who inconvenienced him, as was the case with his accountant. As he later explains, he tried many drugs in his time but none of them ever satisfied him: the only way for him to experience "that good, full feeling" was to murder someone. Even as a ghost, he still occasionally finds time to indulge his addiction.

In keeping with his vicious, sadistic nature, his sexual tastes are extremely sadomasochistic: he took great pleasure in throttling Elizabeth on their wedding night - and also clearly enjoyed being strangled by her in turn. As flashbacks demonstrate, he wasn't above raping his victims, particularly while in the process of murdering them; given that he didn't reach climax until well after one unfortunate woman was quite clearly dead, he also has a penchant for necrophilia.

Because he cannot venture beyond the boundaries of the hotel, the true danger that March poses lies in his ability to persuade, manipulate and corrupt, warping unsuspecting individuals into fellow murderers: upon being introduced to him in a time of grief, both Miss Evers and Elizabeth became his eager partners in crime - the latter going on to become a vampiric serial killer in her own right. Over the course of the 20th century, he made contact with people he considered ideal material for his successor, and inspired in them a bloodlust that they might never have discovered on their own. However, his gift for corruption is most effectively displayed in his interactions with John Lowe, in which he not only appealed to John's deeply-buried rage at the injustices of the world, but also went out of his way to break John's family and spirit just so the detective fully committed himself to the role of a serial killer. 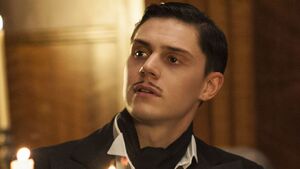