Villains Wiki
Register
Don't have an account?
Sign In
Advertisement
in: Articles under construction, Outdated Articles, Mature,
and 34 more
English

Being with his brother

Killing and eating his victims

He was portrayed by Doug Hutchison, who also played Eugene Tooms in The X-Files.

Due to his psychotic nature, James Russoti has been committed to a mental hospital for apparently quite some time before the movie begins. While most mobsters refer to him by his nickname of "Loony Bin Jim" due to his murderous insanity, his brother hates the name and enters arguments while defending James.

After his superiors have been killed by the Punisher and having his face disfigured by the vigilante, Billy assumes the name Jigsaw and decides break his brother out of the hospital in order to recruit him. James is more than happy to oblige and joins his brother in their crusade against the Punisher. At the same time, they aim to fill the void of power left by the deaths of the leaders of the Mafias, trading weapons of mass destruction with Russian mobsters, an act that was previously opposed by these same leaders.

At the end of the film, after a brief fight with the Punisher, James rushes off to his brother who offers Castle a sadistic choice: he has to kill either a mother and daughter or his partner Micro, with Jigsaw freeing the one that lives.

Castle takes a third option and kills James Russoti, who held a gun to the faces of the mother and daughter. In response, Jigsaw shoots Micro and Castle avenges his partner by impaling Jigsaw and setting him on fire, ending the threat of the Russoti brothers.

Loony Bin Jim is a deranged, violent and cannibalistic sadist who enjoys to slaughter his victims. He proves to have a psychotic strength and an unnatural agility, as proved by his fight with the Punisher, who hardly manages to defend himself from his casual and unforeseeable attacks. His madness gives him an incredible stamina, since he's able to stands on his feet despite being thrown many times against various objects. He also seems to be well versed on subjects of general knowledge, making observations on such things as swedish dishes and medical trivia.

The only person close to him is his brother Billy. The two are very attached, and they share a relationship of mutual protection and affection. In his own way, he seems to really love his brother, to the point of crashing every mirror in a room by throwing himself on them for making Billy avoid his reflection. Billy is the only one allowed to call him "James" instead of "Loony Bin Jim", and he gets very angry whenever someone else does. 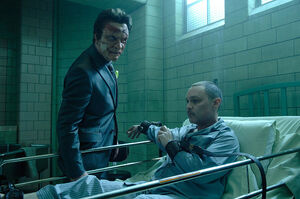 James being freed by Jigsaw. 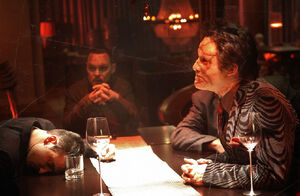 James with Billy during the meeting with the Russian mobsters. 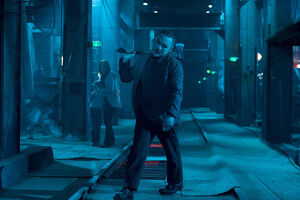 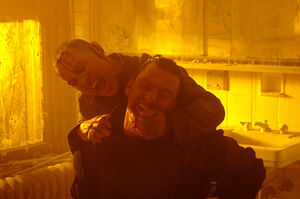