Killing Transformers (both Autobots and Decepticons).

Hunt down and kill Ratchet and Leadfoot (succeeded).
Work with Harold Attinger and Lockdown to capture or kill Optimus Prime.
Exterminate all Transformers by wiping out both Autobots and Decepticons on Earth to avenge the death of his sister who died in the Battle of Chicago.
Kill Cade Yeager and his family to prevent them from exposing Cemetery Wind's illegal activities (all failed).

James Savoy is a major antagonist in the 2014 film Transformers: Age of Extinction, the fourth installment of the Transformers film series.

He was portrayed by Titus Welliver, who also played Maxwell Burke in Star Trek: Voyager, Tom Landricks and Rob Miller in Law & Order: Special Victims Unit, the Man In Black in Lost, Jimmy O'Phelan in Sons of Anarchy, War in Supernatural, Felix Blake in Agents of S.H.I.E.L.D., the Trask Imperial Captain in The Mandalorian and Carmine Falcone in Batman: The Long Halloween.

Exchanging blows and punches, Savoy is able to smash a glass vase on Cade's head while Cade jams his thumb into Savoy's eye socket, and the two immediately shoved each other away of a short distance. Savoy denigrates Cade for hiding and siding with Optimus, saying that they "all have family", before pulling out a knife, prompting Cade to throw a football at his head, tell him that he, at least, is "going to live" to see his family, and push him out the window, causing Savoy to fall to his death, breaking his spine and neck, killing him, ending his wrath for good.

However, Attinger witnesses Savoy's death. Furious, he attempts to avenge his right hand man by attempting to execute Cade during the final showdown against Lockdown, only to be shot and killed by Optimus as retaliation for the deaths of the humans and the Autobots he had killed and Lockdown is later killed by Optimus.

Even before his death, Savoy himself had been twisted into somewhat thinking that Cade, along with his Autobot allies and his family, mocking him over his sister's death as he went on the blind fury with his knife to stab Cade when Cade tries to reason with him for the final time before sending him to his death. This might be the reason why Attinger appointed him as his right-hand man, though his homicidal wrath eventually cost him his life.

In the lesser extent, Savoy can also be considered an anti-villain due to the fact that he clearly loved his sister, something which made him hold a deep hatred towards Cybertronians in his crippled heart, although he is virtually a psychopath due to his willingness to kill innocents. 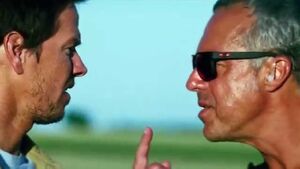 My face is my warrant. 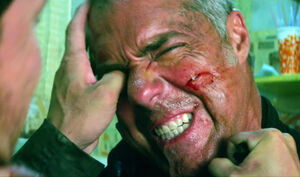 James Savoy's last moments as he falling to his death.