Frame Donald Sanderson (both succeeded).
Kill Sanderson.
Get elected to the Senate (both failed).

James "Jim" Stallworth is the main antagonist of the Criminal Minds episode "25 to Life". He is a serial killer who, twenty-five years before the events of the episode, murdered Donald Sanderson's family and framed him for the crime.

He was portrayed by Philip Casnoff.

Stanworth grew up poor in Washington, D.C. In 1982, his family's house was foreclosed upon, and they were forced to move to the outskirts. Three years later, Stanworth, desiring revenge for the loss of his home, broke into the house, which was now owned by Donald Sanderson. He was accompanied by petty criminals Tommy Wittman and Mary Rutka, whom he had manipulated into believing they were going to rob the house. Once inside, however, Stanworth savagely murdered Sanderson's wife and young daughter, while a horrified Wittman and Rutka knocked Sanderson out and tried in vain to make Stanworth stop. Sanderson is tried and convicted of the murders, and spends the next 25 years in prison.

By the time Sanderson is released on parole, Stanworth has become a successful businessman, married, fathered two daughters, and announced that he is running for a U.S. Senate seat. He had stopped killing after the Sanderson murders in order to maintain a clean record for the political career he envisioned for himself, but indulged his psychopathy in other ways, such as casually firing thousands of his employees and verbally and emotionally abusing his wife and children to the point that they are terrified of him.

Sanderson also continues to torment Sanderson throughout the latter's imprisonment, at point having heroin planted in his cell so he would lose his Internet privileges and, with them, the ability to research his case and possibly win his freedom. When Sanderson is paroled on the recommendation of FBI Agent Derek Morgan, he confronts Wittman, ultimately killing him in self-defense. Stallworth orchestrated the encounter by having Wittman contact Sanderson in the hopes that they would get in a fight and kill each other, or at least that Sanderson would kill Wittman and go back to prison.

Morgan and his colleagues at the FBI's Behavioral Analysis Unit (BAU) believe that Sanderson is innocent, however, and start re-investigating the murders. Using their profile of the killer as an ambitious, power-hungry sadist who at one point lived in the Stallworths' house, BAU technical Analyst Penelope Garcia researches the house's former occupants and finds the foreclosure paperwork for the Stallworth family. Further research into Stanworth himself - including the fact that he had fathered a child with Rutka, and paid her off to keep the child's paternity a secret -they suspect that he is the killer. Their supervisor Erin Strauss cautions them against going up against the well-connected Stanworth, but they proceed to after him anyway.

When Mary blackmails Stanworth with a recording she made of the Sanderson murders, he goes to her apartment and kills her. The BAU arrives while he looks for the tape, forcing him to escape out the window. No one sees his face, but Mary had scratched him during the struggle, leaving DNA evidence.

That night, he holds a fundraiser at his house, attended by political donors and the media. Morgan interrupts his speech and accuses him of murdering the Sandersons and Mary. Stanworth dismisses Morgan's "worthless fabrications", but begins to lose his temper when Morgan asks his wife about his cruel streak and need for total control. When his wife meekly asks him what is going on, Stanworth yells at her to be quiet, unnerving his guests. Morgan and fellow BAU agent Emily Prentiss bluff that they found the recording and tell Sanderson he made several sloppy mistakes; this truly enrages him, and he screams that he does not lose control. He is then arrested and presumably imprisoned for murder, and Sanderson is exonerated and freed. 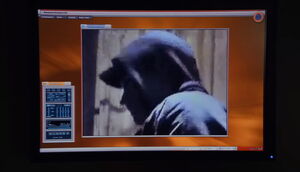 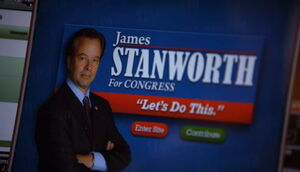