Alvin and the Chipmunks: The Road Chip

Get revenge on the Chipmunks for making him lose his girlfriend by banning them from the airport.

Ban Miles from the airport.
Arrest the Chipmunks (all failed).

Agent James Suggs, simply known as James Suggs, is the main antagonist of the 2015 live-action movie Alvin and the Chipmunks: The Road Chip. He is Alvin Seville's new arch-nemesis.

He is an air marshal who takes his job extremely seriously and holds a powerful grudge against the Chipmunks for their music being the theme song of his heartbreak (his girlfriend dumped him while it was playing,) and eventually reveals plans to have them stuffed as a gift for his ex so she'll take him back.

He was portrayed by Tony Hale, who also played Leslie Noodman in Nickelodeon's Sanjay and Craig, Apothecary Gary in Amphibia, Joker in Batman Ninja, and Doctor Psycho in Harley Quinn.

James Suggs takes his job as an air marshal extremely seriously, constantly referring himself as "the police of the sky".

Unlike Ian Hawke from the previous films, who wants to exploit them and use them for financial gain, Suggs wants to get rid of them for disrupting his airport and costing him his promotion to his job at Department of Homeland Security. Suggs also holds a powerful grudge against the Chipmunks for one of their songs causing his girlfriend to dump him due to him being a sociopathic and obsessive fan of the Chipmunks, and his hatred of them began to form.

Bent on revenge, Agent Suggs follows the boys as they make their way to Miami. On his way, he takes advantage of his badge and title to try and do the same to the people he meets (one such incident involved him trying to use his title to get out of paying cab fare), but failed. His detective skills can be confirmed as he is able to catch up to the boys on multiple occasions.

Agent James Suggs was an air marshal on a plane that Alvin, Simon, Theodore, and Miles were on. Since the Chipmunks did not have enough money for all four of them go to Miami and stop their proposal, Miles found a way get all three on them on the plane. Mostly it was because Alvin disrupted the plane that got them in trouble with Suggs who is the Air Marshal on the plane (along with Theodore letting lose all of the animals in the cargo hold, making the plane in total chaos). He was planning to have them arrested and banned the chipmunks from flying. In Suggs' office, Simon asks what they could have done to make Suggs despise them so much. Suggs reveals to the Chipmunks that he blames them for one of their songs (Christmas Don't Be Late) causing his girlfriend dump him due to him being an obsessive fan of the Chipmunks, and his hatred of them began to form. As he watches the gang leave his office, Suggs vows to follow them.

Suggs rides a cab (refusing to pay using his status as an excuse, to the cab driver's chagrin) to a bar saloon and encounters the Chipmunks again. Alvin distracts Suggs by hiding in a biker's beard. Suggs grabs for Alvin, but snatches only the beard, and the biker headbutts him to the floor, starting a bar brawl. Alvin then challenges Suggs to a face off. Dodging Suggs' karate chops, Alvin launches several toothpicks into Suggs' face. As Alvin escapes, the angry bar patrons block Suggs' path and toss him out the bar window. As the gang escapes on the cab Suggs gives chase, but not paying attention to where he's going, he runs straight into a sign, and falls to the ground unconscious.

Suggs later catches up to the Chipmunks and Miles at a musical parade in New Orleans, and gives chase, but gets hit by a trombone and gets drunk. The next morning, Suggs wakes up in a hotel room with other passed out people. He moves a carnival mask aside and is startled to find a man underneath. The man introduces himself as Vito and explains to Suggs that he partied with the Chipmunks last night, to Suggs' horror. Vito then adds that Suggs got a tattoo. Suggs unbuttons his shirt and gasps at a tattoo on his chest reading "sugg life" and a huge one on his back displaying the Chipmunks with the phrase "Munks for Life".

Suggs goes to an airport station to urge with a man and tells him to get the fastest car there is, so he can find and catch up with the Chipmunks. Much to Sugg's disappointment, he is presented with a small yellow car. However, he drives it anyway and gives chase towards the gang headed to Miami.

Finally catching up to the Chipmunks at the Miami Hotel, Suggs gives chase once again. The Chipmunks dash to the elevator, but Suggs manages to stop the elevator door from closing and has them cornered. However, the Chipmunks outsmart him for the final time by hitting the emergency stop button also turning off the power, then escape from the rooftop of the elevator and trapping Suggs in the process.

Hours later, a hotel maid frees him from the elevator. The exhausted and smelly air marshal decides to relax by the pool. He is told to leave since it is for hotel guests only, but Suggs refuses and says the only way that he is leaving is if they carry him out. Two security guards are called in and do just that. It's quite possible that he lost his job as air marshal for his actions. 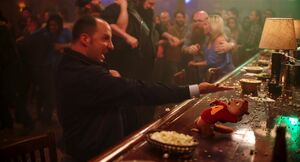 Suggs battles Alvin in the bar 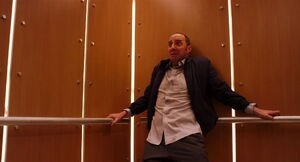 Suggs defeated and trapped in the elevator.