James Sunderland is the main protagonist of Silent Hill 2. He can be considered a protagonist, but his moral standing is rather ambiguous due to various bad things that he has done.

He was voiced by Guy Cihi in the original game and voiced by Troy Baker in the HD Collection.

The young James worked as a clerk for a small company, possibly in Ashfield. His father is Frank Sunderland, who is the superintendent of an apartment building in Ashfield.

James and Mary met at a house party held by a mutual friend. Their affection evolved from a blazing passion to a peaceful and stable relationship. Before Mary and James were married, James would listen to Mary play the piano. Mary liked to play the piano and even though she wasn't very good at it, James still loved to hear her play.

Prior to the events of Silent Hill 2, Mary and James decided to take a vacation in Silent Hill after reading a brochure for the town. They stayed in the Lakeview Hotel, where James recorded a videotape of Mary. Mary stated in the videotape that she loved the town and would love to go to Silent Hill again one day. James accidentally forgot the videotape in the hotel and the couple left Silent Hill.

Unfortunately, three years prior to the game, Mary was struck with a terminal disease, and she deteriorated to the point of having violent mood swings, lashing out at James in anger. Her doctor predicted she would have less than three years left to live and told James that there was no effective treatment for her condition. James questioned Mary's doctors about her illness, and could not believe they would just let Mary die. He searched through medical books for information about Mary's illness but never found anything useful. Later in her illness, James visited Mary less frequently because she was emotionally volatile. Her mood swings left him bewildered about what was "right" to do. Unable to cope with their suffering, he eventually snapped and killed Mary via suffocation in cold blood.

After confirmed that Mary was indeed dead, James carried her body to his car and put her in the backseat, not the trunk. It is unknown how much time passed between Mary's death and the game - the novelization says it was "just a few days ago", and if James lived in Ashfield, the drive between Ashfield and Silent Hill would be "about a half a day".

James was originally envisioned with having two different sides to his personality. Maria describes James as kind; Mary, in her letter to Laura, describes him as a little surly and says he does not talk much but is sweet underneath his enigmatic exterior. James is typically courteous to other characters he meets in Silent Hill. He is polite and mild-tempered. For example, he tries to help Angela Orosco cope with her emotional distress and tries to touch her shoulder to comfort her but fails. When James first encounters Eddie Dombrowski, he becomes concerned for Eddie's welfare and advises him to leave the town. He also expresses concern for Laura, attempting to follow her through Silent Hill so she won't come to harm.

However, James's darker side is revealed in some of his actions. James lost some of his confidence and self-respect when Mary became ill. James is in deep grief and depression from his relationship with Mary and her death. He denies the murder of his wife, attributing her death to her disease. James may be perceived as cowardly. Upon being confronted with the truth or something uncomfortable, James tends to avoid eye contact, looks down, turns away, or remains silent. James is rather bad at consoling people; he often falls short in regards to helping Eddie and Angela.

James is borderline suicidal, yet seems to deny his suicidal feelings. James originally came to Silent Hill to kill himself and actually does so in the In Water ending.

James does several questionable things throughout the game, including leaving his car door open, leaving his flashlight on while hiding from Pyramid Head, sticking his hand inside a hole in a wall after being pricked by something inside, dipping his hands inside a filthy toilet to retrieve a wallet and neglecting to wash his hands afterward, and asking a visibly armed Eddie if he's "gone nuts". If the player walks up to Angela again in the cemetery, she will ask, "Aren't you looking for someone?" and a forgetful James will reply, "That's right." and walk off. He also does risky things such as jumping down long, dark holes that appear to be bottomless. His determination to uncover the truth about Mary's fate and his implied suicidal tendencies may explain his reckless and illogical behavior. James is in grief and mourning, and he tells Angela, "I guess I really don't care if (Silent Hill) is dangerous." 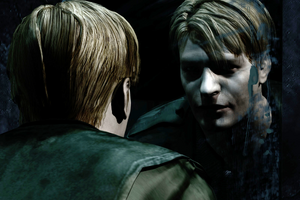 James stares deeply at his reflection. 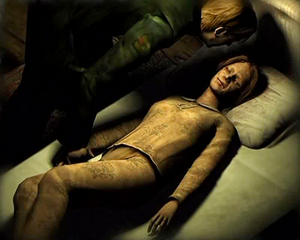 James smothers Mary with a pillow. 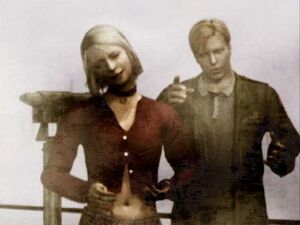 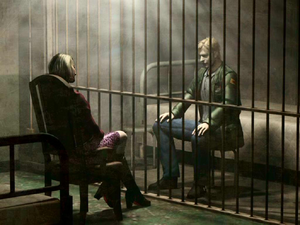 James talking to Maria behind bars. 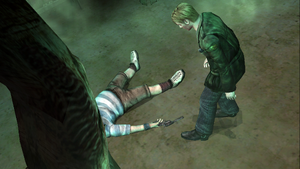 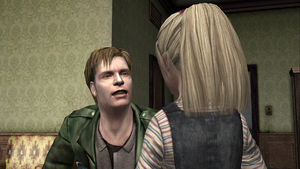 James reveals the truth to Laura. 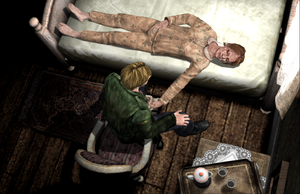 James having a final discussion with Mary in the Leave/In Water endings. 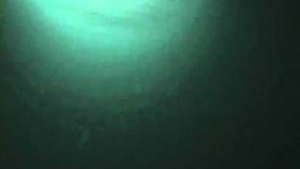 In In Water, James drowns himself by suicide. 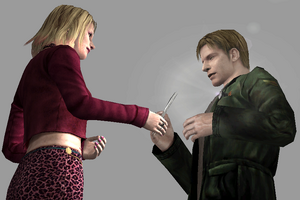 James rowing a boat to the church with Mary's body. 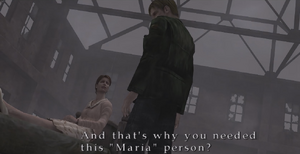 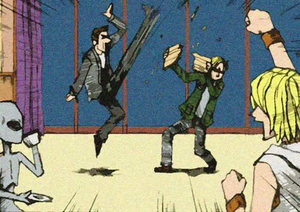 James in the UFO ending of Silent Hill 3. 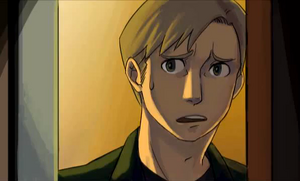 James in the UFO ending of Silent Hill: Shattered Memories. 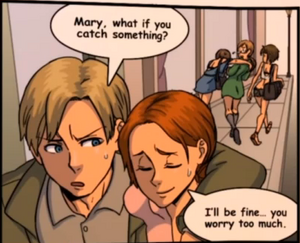 James in the joke ending of Silent Hill: Book of Memories. 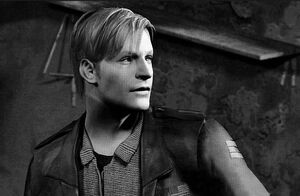 A portrait of James. 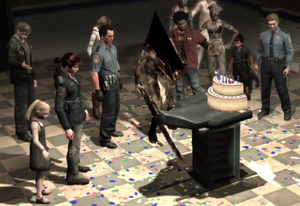 James in the Surprise ending of Silent Hill: Downpour.
Add a photo to this gallery

Retrieved from "https://villains.fandom.com/wiki/James_Sunderland?oldid=3443469"
Community content is available under CC-BY-SA unless otherwise noted.