Kill Jemima Puddle-Duck and her Ducklings, along with Peter Rabbit, Benjamin Bunny and his entire family (failed).

The "Foxy Whiskered Gentleman" (later renamed Mr. Tod in the 1912 book The Tale of Mr. Tod) is one of the main antagonists of the Beatrix Potter series. He is Peter Rabbit's second arch-nemesis.

He was originally voiced by the late Dinsdale Landen in the animated anthology television series The World of Peter Rabbit and Friends, later been voiced by Mark Huckerby in Peter Rabbit, and by Fayssal Bazzi in 2018 film adaptation.

Mr. Tod is a red fox who wears a pink shirt with brass buttons, a green jacket, a white cravat, and green pants.

Mr. Tod appears in Beatrix Potter's twelfth book "The Tale of Jemima Puddle-Duck" as The Foxy Whiskered Gentleman. He is first seen reading a newspaper when Jemima attracts his attention, requesting a nest to lay her eggs. When Jemima, having laid nine eggs, is away, Mr. Tod just watches the eggs. At last, he sends Jemima out to prepare for a dinner party for the two of them by asking her to get sage, thyme, mint, parsley and two onions for an omelette, with her being unaware that the herbs shes gathering are used for stuffing roast duck. As soon as she has brought him the ingredients, he shows his true colors and takes the herbs away from her to make the omelette. He prepares to cook Jemima, but Kep (whose house Jemima had taken the onions from) and two foxhound puppies attack him and chase him away. He appears again in the book (The Tale of Mr. Tod) Mr. Tod suddenly arrives in a very bad mood, which has caused him to move house. The fox discovers the badger asleep in his bed, and originally plans to hit him, but decides against this due to the Badger's teeth. He decides to play a trick upon him involving a bucket of water balanced on the overhead tester of the bed. Brock however is awake, escapes the trick and makes himself a cup of tea in the kitchen. Mr. Tod thinks the bucket has killed the Burglar and decides to bury him in the tunnel the rabbits have dug, thinking Tommy dug it. When Mr. Tod discovers Tommy in his kitchen and has tea thrown over him, a violent fight erupts that continues outdoors. The two then roll away down the hill still fighting. Benjamin and Peter quickly gather the baby bunnies and return home before Mr. Tod and Tommy Brock noticed them.

Contrary to the novels and TV series, in this movie, Mr. Tod is displayed as a supporting character. 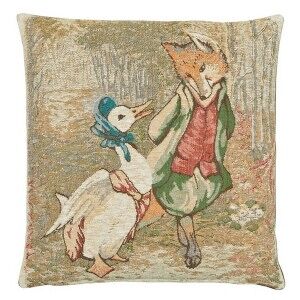 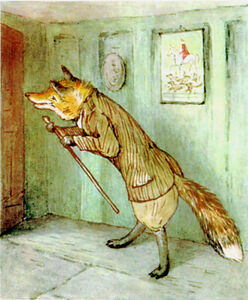 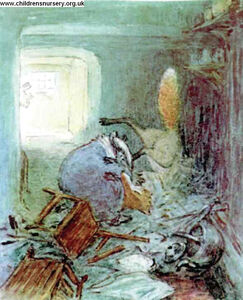