Hanging out with Peter Griffin (formerly).

Get revenge on Peter Griffin (formerly).

Make amends with the main characters of Family Guy

James Howard Woods (born April 18, 1947) is an American film/stage/television actor and a recurring antagonist in Family Guy. He is the man for whom Quahog's high school used to be named. He also serves as one of the main antagonists in season 6 and 8 and a supporting character/anti-hero from season 9 onwards.

He is voiced by himself, who also played Hades in Disney's Hercules, Falcon in Stuart Little 2, Lex Luthor in Justice League Action, Owlman in Justice League: Crisis on Two Earths, Dr. Phillium Benedict in Recess: School's Out!, Gloomius Maximus in Rolie Polie Olie, Captain Ahab in The Adventures of Moby Dick, Ned Trent in The Specialist, George Sheffield in Scarface: The World is Yours, Martin Walker in White House Down, Lester Diamond in Casino, Byron De La Beckwith in Ghosts of Mississippi, and Maximilian "Max" Bercovicz in Once Upon a Time in America.

He becomes friends with Peter Griffin because his former best friend, Peter's dog Brian, started dating Shauna Parks and Peter felt left out. Peter and Woods remain friends until Brian breaks up with Parks and starts hanging out with Peter again. Woods becomes jealous and becomes very grumpy towards Peter and Brian.

In the end, Peter and Brian successfully trap Woods in a box using Reese's Pieces as bait. His box is then sent to an unknown warehouse containing a large amount of crates to be studied by "top men," parodying the final moments of the Ark of the Covenant in Raiders of the Lost Ark.

He returns in "Back to the Woods", where he steals Peter's wallet when he leaves from the Barry Manilow concert to get revenge. He spends a lot of money with Peter's credit card, and uses his driver's license, social security number, passport and the title to the house to take Peter's house, family and title; in other words, Woods commits identity theft, leaving Peter homeless. In retaliation, Brian encourages Peter to assume Woods' identity himself and get revenge on him by ruining his reputation to the general public. He does this by claiming he is starring in an offensive comedy movie about the September 11 Attacks on the David Letterman show. After doing so, James instantly goes from being a beloved actor to the most hated man.

James gets furious and confronts Peter but, exactly as before, Peter and Brian trick him into being trapped in another crate, when Peter remarks they should remember it immediately for next time. In the end, the box is sent once again in the same warehouse by "top men".

He returns again in "Brian Griffin's House of Payne" when he turns Brian's pilot for a serious drama into a sitcom called Class Holes!. He has a chimp sidekick and in the end, he implies that he might face a lawsuit for having sex with his co-star whom he thinks is under 18. Brian had just quit the project when this was announced.

James Woods also appeared in "And Then There Were Fewer". During the plot of the episode, it is implied that he terrorized several Quahog residents of his sociopathic ways besides the Griffin family; such as convincing Tom Tucker to turn down the role of Freddy Krueger in the Nightmare of Elm Street series, hitting Bonnie Swanson on the throat, eating Seamus's arms and legs while high on acid, stealing Mayor Adam West's Twitter account name, molesting Consuela's 14-year-old nephew, blackmailing Muriel Goldman into selling his favorite medicine from Mort's pharmacy, dumping Diane Simmons on her fortieth brithday during their secret date and introducing her to Danny Bonaduce instead of Dan Rather, and stealing Cheryl Tiegs from Quagmire. It wasn't until a news intern named Priscilla seduced him and converted him into a born-again Christian, to which Woods finally starts to express genuine remorse for his crimes against the Quahog residents. It was then he invited them to dinner in his mansion in order to make amends with them, but he falls victim along with Priscilla, Stephanie, Muriel, and Derek Wilcox to a plot of murder planned by Diane Simmons, who then reveals that she employed Priscilla to seduce Woods and convert him into a born-again Christian, which led to the dinner party so that Diane can get her revenge. This reveals all along James did indeed want to atone for his past sins and become a better person , redeeming himself spiritually. James is brought back to life in Tom Tucker: A Man And His Dream. 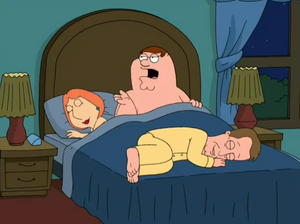 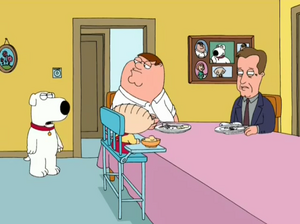 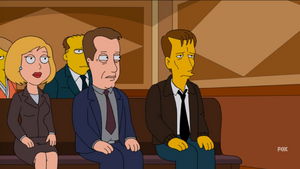 With his Simpsons counterpart