Force Darwin and Gumball to be her boyfriends ("The Girlfriend", abandoned).

Jamie has not been seen very frequently, making only small appearances. Her first appearance was in a cameo in "The Third". Her latest appearance, also in a cameo, was in "The Decisions". She is one of the many minor characters to be done in Rendered 3D style.

In "The Words", Jamie rudely cuts in line of Gumball and Darwin. Darwin then insults her during his song, declaring that she's rude and impolite. In "The Storm", Jamie hates Gumball for kissing Carmen.

Jamie appears as a major antagonist in "The Coach". After Gumball and Darwin, and the other students of Elmore got hurt very badly from the gym, Jamie bursts into the cafeteria and threatens them to beat it. She was then about to punch Gumball in the face when her mother, Coach orders her to apologize to Gumball. Jamie apologizes and says they will be friends, which shocked everybody. The next day, Jamie confronts Gumball and Darwin again, but Gumball attempts to be nice and say she doesn't have to be a bully anymore, but Jamie shoves him in Darwin's mouth and threatens that she will go down in school history. Jamie is later seen sneaking into Coach's car, and Gumball and Darwin go after them, believing that she will do something that will end badly. The end of the episode revealed that Coach was indeed Jamie's mother, and that she works at the school to keep her daughter in check.

Jamie had another antagonist role in "The Girlfriend", where she violently forced Darwin to be her sweetheart, but their relationship was short-lived. She later forces Gumball to become her boyfriend and chases him around the school, Jamie ends up knocking him out after Gumball unintentionally insults her. This episode was one of the series most frowned upon and controversial, given that Jamie was openly violent and insulting towards Gumball and Darwin. Many fans and critics saw Darwin's advice of waiting for Jamie to come around as dangerously misleading, and that it gave bad advice to children about submitting to abusive relationships. 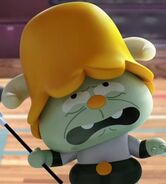