Caring for her cats

Abusive Girlfriend
Jane is a one-time villain from The Cleveland Show. She only appeared in "Buried Pleasure". She is a lonely cat lady, who dated and abused Holt.

She was voiced by Stacy Ferguson.

In "Buried Pleasure", Holt's loneliness led the guys to help him find a girlfriend. Terry set him up with his co-worker at Waterman Cable, Jane. Jane was a lonely cat lady, who was just as desperate as Holt, making them a perfect match. On their first date, they really hit it off, but this would be the only happy moment of their relationship. As soon as they went to a party later that night, Holt came in with a black eye. Jane stated that Holt tripped, while bird watching, and gave himself a black eye with his binoculars. Everyone else at the party knew this wasn't really the case and that Holt was stuck in an abusive relationship.

The guys lend Holt a helping hand, by trying to get him to tell the police, but he felt obligated to do so. They then tried to talk to Jane, but this only got themselves abused as well. The guys wouldn't fight back, because "hitting a girl" was considered abusive, whether they did it in self-defense or not. This went on for a while until the wives of the respective abused men stepped in and fought her. Donna, Kendra, and Arianna beat her up and got her to finally back off and leave Holt alone. Her fate, she mentioned, was "Going back to JDate, where people get her."

In "You're the Best Man, Cleveland Brown", she made a cameo at LeVar and Evelyn's wedding. strangely, she was seen dancing with Holt, despite where they left off. She would never be seen or mentioned again.

Jane is a Caucasian adult woman with vibrant red hair, worn in a bun. She wears a white buttoned-up shirt and a pink jacket over it. She has blue jeans and pink shoes. Jane also wears white pearl earrings.

On the surface, Jane looks like a happy and joyful cat lady, whose only shortcoming is her loneliness and excessively numerous pet cats. But deep down, she is a domestic abuser, who physically abuses her boyfriends, when they're in private. Whenever they're in front of others, she puts on her "happy, joyful lady mask" and pretends she's a nice person. She does this not only to cover up for anyone who might try to rat her out to the police but also so she can send subtle threats to her victims, should she try to control them in public. 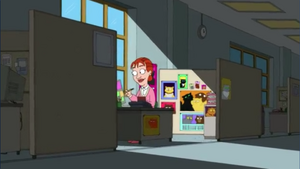 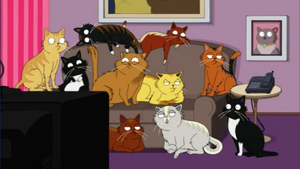 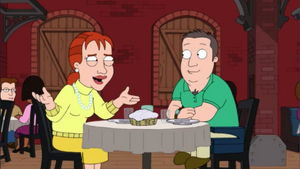 Jane on her first date with Holt. 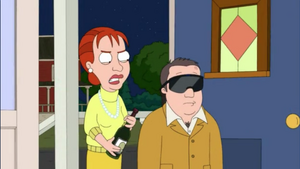 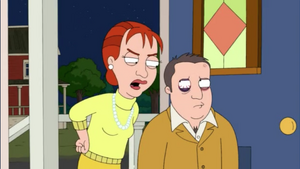 Jane being abusive to Holt. 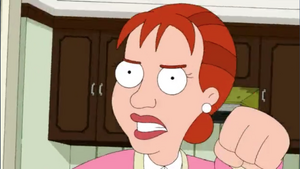 Jane punching Cleveland in the face. 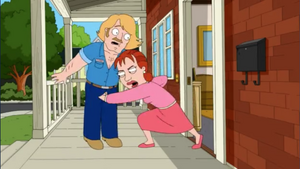 Jane punching Terry in the balls. 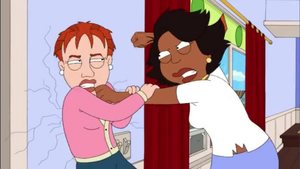 Jane in a fight with Donna. 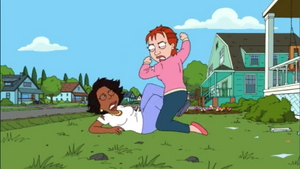 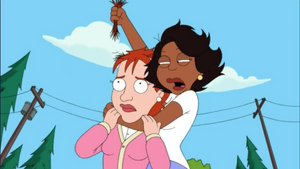