Studying the sciences of time traveling

Get the power of time travel (briefly with a device)

Janet Smythe is the main antagonist of Disney Channel's Best Friends Whenever in the first season.

Janet is CEO of GlobalDigiDyne, where she invented wireless technology after a shock form her desk lamp in 1991. However, what she discovered that year was her ticket to time travel, coming from a pair of female teenagers who have that distinct power. In addition, the pair always time jump to a bright white lab that Janet is responsible for, codenamed 'Pelican Ballroom.' She is also Cyd and Shelby’s archenemy.

Janet is portrayed by Nora Dunn, which she portrayed Natalya from Air Bud: Golden Receiver, and her younger self by Tamela D'Amico.

For the masses who she wants to buy her products, Janet plays herself up as haughty, caring and charming. However, underneath her façade, she is truly ruthless, power hungry, and greedy. Janet is a genius and has a deep passion for science and inventions; however, a large portion of this relates to feathering her own nest. As shown in the bad future, she is perfectly happy to plagiarise other people's inventions.

At heart, she is completely morally bankrupt, perfectly happy to practice human experimentation, and outright kill people to further her research. She is likewise hot tempered, violent, sometimes seeming outright insane, and having seemingly no concept of empathy or guilt. Nevertheless, she is also cunning, dedicated and patient all of which makes her a dangerous opponent.

In August 1991, Janet was working on a project until she tried to turn off a lamp. The lamp shocked her and got mad. However, when she mentioned about someone inventing wireless technology, she had a moment. That inspired her to create wireless technology and the founder of GlobalDigiDyne. However, when she was working on the project, she notices tachyon particles in her garage. It took her 25 years to full understand what the particles are and what they actually do.

Jump to the Future Lab

She first debut in "Jump to the Future Lab," as she introduces security robots to fellow audiences. Cyd and Shelby break into GDD to see what she's planning. At the end, Janet introduces Norm the a secret chamber room called 'Pelican Ball Room,' where Cyd and Shelby were strapped in when they jumped to the future.

Cyd and Shelby Strike Back - Parts 1 and 2

Janet appears again in "Cyd and Shelby Strike Back". Cyd and Shelby were trying to figure out how to stop Janet from forming GDD. They decide to travel back in time to 1991, where it all began. After many attempts of stopping her, they succeed. In the present 2015, GDD no longer exist, while Cyd is in Peru and Shelby in Alaska. They decided to meet in Shelby's house in Portland, Oregon.

As they meet in Portland, Shelby finds out that Barry doesn't know her and Janet lives in her house. Shelby tried to stop Cyd from coming but Shelby runs into Janet. Janet lets Shelby in her home. Janet tells her that she would be busy by doing something. Shelby tells Janet that she'll be back to wait for Cyd but her curiosity gets in her way as she walks to the attic, which was her old room. Janet comes out of the shadows and tells Shelby that she has been looking for her and Cyd for nearly 25 years.

Shelby gets strapped in the extraction chairs. She tells Janet that Cyd is not coming until her phone goes off. Janet reads the message Cyd has sent and reply to her the way Shelby would. Cyd arrives to the house and she was also strapped into the chairs. Barry, Naldo, and Marcie gets tied up in a bench. They are now helpless and Janet uses Cyd for the extraction chamber. Shelby tries to rescue her but Janet stun lasers stopped her from reaching Cyd. Cyd is unconscious in the chamber but she manages to stop Janet. They travel back to 1991 to reverse everything. But, in 1991, young Janet discovers tachyon particles in her garage. She was able to grab the samples and try to figure out what they are.

Janet makes her final appearances in the three-part season finale where she hunts down Cyd and Shelby to obtain their time traveling powers.

Cyd and Shelby are stuck in Janet Smythe Academy and they try to figure out how to stop Janet. Cyd and Shelby splits up. Shelby asks Drake about what happened within the two years. Drake told her that Janet became supreme ruler of the United States and used everyone else's credit for the inventions that inventors worked for. Cyd cannot believe her eyes as she sees Barry and Naldo frozen in a suspension chamber. She also watches a video about the how the security works in JSA. She is shocked that Drake is head of the security.

They seen enough and try to time travel, but their powers did not work. They wonder why it didn't work. Everyone at JSA were told that Janet Smythe is coming to the school. The girls wants to escape but Janet has arrived to the school. She knows about them and time traveling. Cyd and Shelby argue about Drake and they were about to duel. But, they used the weapons to throw at the clock, known as Janet's time locker, and they were able to travel back to the present.

Janet invites herself over for dinner at Shelby's house, and Cyd and Shelby try to talk to her without raising suspicion. However, when they mentioned time travel, Janet shared her experience with the tachyon particles back at 1991. She thinks that they are linked to time travel. She introduced them a 'tachyonmeter,' a device that can sense tachyons.

Cyd and Shelby decides to go back to earlier to think what Janet's next move. While they were thinking, Janet was at their room. Janet told the girls that she remembers everything that Cyd and Shelby do. The only option they have is to eliminate their powers for good.

After thinking, they decided to go to GDD. Once they got there, GDD was a lot more different then it was when the girls were at least five years old. Many attempts were made and they break into the Pelican Ball Room to extract their time travel abilities. They succeed on getting rid of their powers, but Janet witnessed it all.

When they were trying to feel confident about not having their powers, Cyd and Shelby walked into Barry's RV, where it got robbed. They wonder who did it until Janet comes out of the shadows. She told the girls that she kidnapped Barry and Naldo, and confiscated his equipment. She wants to gain the time travel ability from Barry's equipement.

Cyd and Shelby are powerless and they have nothing to do. Janet calls them idiots and walks away from the RV lab. They try to find any source to stop her but they found the cooler, which contained a blue beaker, where they got the powers in the first place.

After Janet confiscated Barry's equipment, she asked him what was their secret to time travel. Janet trapped Naldo with three robotic spiders in a chamber. Outside of GDD, Cyd and Shelby try to figure how to get in to rescue Barry and Naldo. They asked Norm but he disagrees with the girls. The only option is to break in GDD.

When the girls arrived at GDD, they crawled through security but they couldn't. The girls told them that they know the solution to time travel. Janet steps in and tells the guards to take them to the Pelican Ball Room.

While in the Pelican Ball Room, Janet constantly asks the girls what was their secret. The girls accidentally tells Janet that the blue beaker and the laser were the items used to create the powers. She grabs the beaker and holds it. Norm comes in the Pelican Ball Room and apologized to Shelby for not believing. The guards and the others fight each other while Janet calls for more security. Cyd and Shelby were able to gain their powers back and smashed the beaker. They travel back two days before. The girls soon realized that Janet had the tachyonmeter with her.

Janet reminded the girls on how the device worked. The guards connect the laser and Janet stands in front of it with the beaker. The laser shot Janet and she got the ability to time travel. Janet threatened the girls that she would jump back in time to separate them from ever meeting each other. The girls admit defeat but they strike back. After they attack the guards, they time blocked Janet from jumping back to the past. With their powers combining, Barry warned everyone to escape before the explosion could wipe out everyone from a 3,000 mile radius. Their powers exploded while Janet's ability to travel back was drained. The explosion opened a time ripple and two women come out of the portal.

The two women fight the guards and they succeed on defeating them all. They reveal themselves as the future selves of Cyd and Shelby. While they have a conversation, Janet gets up, picks up her shin whacking weapon, and attack the four. They were able to beat Janet as she went into the portal that leads to the future. After defeating Janet, the future selves said that they will lock her up. They head back to their own timeline and everything else was reverted back the way it was.

Within Janet's defeat days later, the time ripple opens in the school late at night and a mysterious figure comes in walking. That figure is Sebastian, a selfish prince from the 16th century. 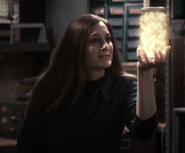 Janet informing the guards that she wants the girls 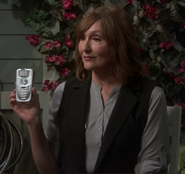 Janet confronting Cyd and Shelby, after taking everything from Barry's lab 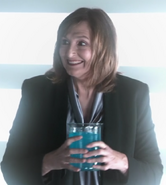 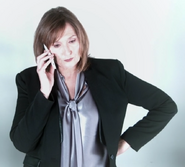 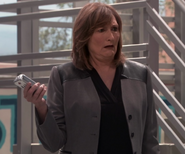 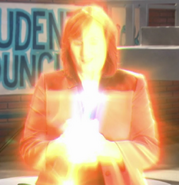 Janet obtaining powers from the beaker "Let's see you handle this!"

Janet's powers collide with the Cyd and Shelby

Janet's defeat, as she was pushed into the ripple by the girls