I Saw the Devil

Proficient with knives and rifle

Get away with his murders (in the first place).

Destroy the life of Soo-hyun (succeeded).

Jang Kyung-chul (in Korean 장경철) is a bus driver and a serial killer who terrorized a city in South Korea primarily targeting women, raping and often dismembering them. He is the main antagonist of the 2010 South Korean psychological thriller movie I Saw the Devil.

He was portrayed by Choi Min-shik.

In the beginning of the film, he kills Joo-yoon Jang, the pregnant daughter of a former police officer. Her fiancé, Kim Soo-hyun, then tracks him down in order to exact slow and painful revenge.

Kyung-chul often uses his job as a bus driver to lure female passengers to his remote residence before raping and killing them. At one point, he kidnaps a school-girl and attempts to rape her on his property before Soo-hyun intervenes. He later forces a nurse to perform oral sex on him before he is once more interrupted and punished by Soo-hyun.

He had a teenage son named Sang-won, whom he abandoned and sent to live with his grandparents.

One of his only allies was another serial killer named Tae-joo, a cannibal whose girlfriend Se-Jung had affair with Kyung-chul.

He spends the majority of the film on the run from Soo-hyun in a situation that reverses the roles of the killer and the victim.

Later, Kyung-chul discovered that a device which Soo-hyun put in his mouth was inside his body, and attacked Joo-yun's father and raped and killed her sister Soo-yun.

When he reveals to Soo-hyun after that Kyung-chul was ready to surrender himself to the police, he was suddenly dragged by Soo-hyun's car and tied up awaiting his execution at Kyung-chul's warehouse when Joo-yun was killed.

At the moment of this final confrontation when Soo-hyun asked to Kyung-chul why he killed women and girls which caused their loved ones to be trapped in in a state of sorrowful agony, he said that he enjoy it as Soo-hyun leaves and covered his ears at same time his parents and Sang-woon came to visit him, opening the door Kyung-chul begged not to open, but he decapitated him and this shocked his family at what he did to Joo-yun's family. 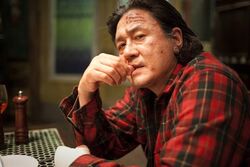 Retrieved from "https://villains.fandom.com/wiki/Jang_Kyung-chul?oldid=3777669"
Community content is available under CC-BY-SA unless otherwise noted.