Riley's fear (only because she believes so)

Skilled use of his mallet

Jangles the Clown is a minor antagonist of Pixar's fifteenth full-length animated feature film the Inside Out. He is one of Riley Andersen's worst fears. In reality, though, Jangles is an entertainer and his only goal is to help out in birthday parties.

He was voiced by the Pixar employee Josh Cooley.

When Jangles was hired by Riley's parents to perform at her third birthday party, she became so scared of him that he traumatized her. The experience created a gigantic, twisted version of him living in Riley's mind and was kept in the Subconscious, a prison full of Riley's fears.

When Bing Bong is put into Subconscious, he is imprisoned in a balloon cage on top of the sleeping Jangles. After Joy and Sadness rescue him, they wake Jangles up in order to break out of the Subconscious and wake Riley up so they can use the Train of Thought and get back to Headquarters. They make up a lie that there's a birthday party at Dream Productions, which Jangles is greatly obsessed with. They lure Jangles into the studio and wreak havoc. Riley captures his image in her dream, terrifying both her and Fear.

It is unknown what happened to Jangles after the end of the film, although it is possible that he was captured and sent back into the Subconscious.

During the credits scene, the real Jangles is seen at a birthday party and is revealed to be secretly unhappy with his job. According to his emotions, he attended drama school for 6 years.

Jangles is a giant, obese clown with blue hair tufts, a white face with a big smile, a large red nose, and glowing green eyes. He is dressed in a red top and blue polka-dot pants with big floppy shoes and carries a huge mallet. 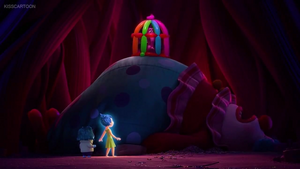 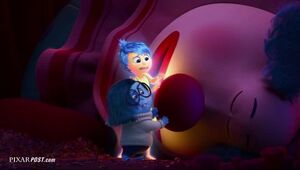 Joy and Sadness waking up Jangles. 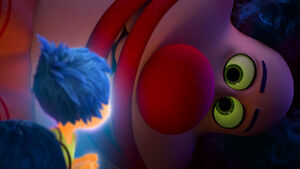 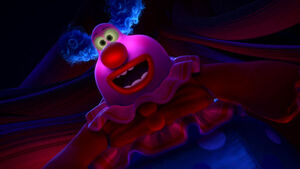 "Did you say birthday?" 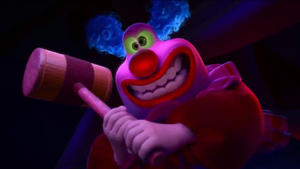 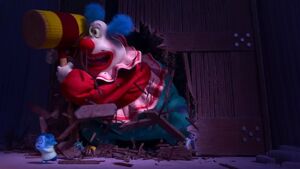 Jangles breaking out of the Subconscious. 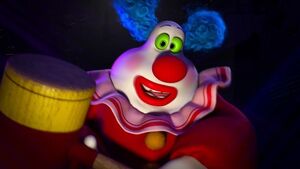 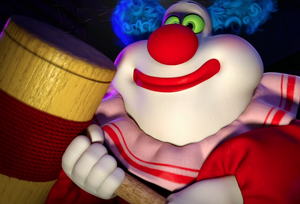 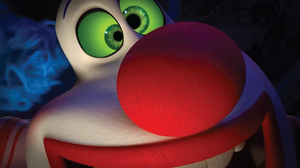 "WHO'S THE BIRTHDAY GIRL!?" 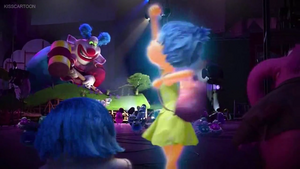 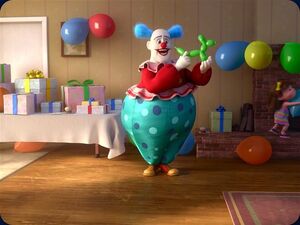 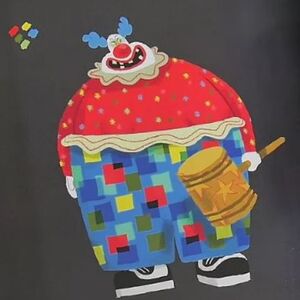 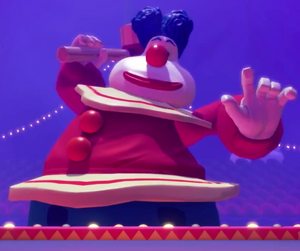 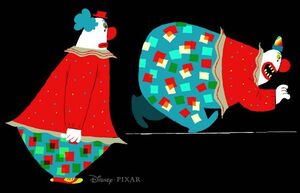 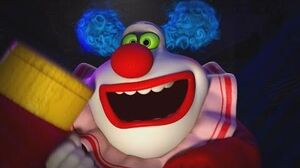 Inside Out - Jangles The Clown