Plotting to ensnare men who are either vulnerable or rich

Janine Butcher is a fictional character and one the central antagonists of the British soap opera EastEnders.

Initially starting off as a troublesome schoolgirl who was the daughter of Frank Butcher and stepdaughter of his two wives Pat Butcher and Peggy Mitchell respectively, Janine later became involved in various high-profiled storylines that saw the character evolve into a calculating and manipulative antagonist who was willing to do anything in order to become rich or keep her relationships afloat. This was most notified when she ended up killing her spousal step-brother Barry Evans shortly after marrying him for his inheritance. She also murdered her third husband Michael Moon in self-defense, tried to kill her second husband Ryan Malloy, accidentally caused the death of Danielle Jones, was wrongfully imprisoned for the death of her sworn enemy Laura Beale, framed Stacey Slater for attempted murder, conspiring with Archie Mitchell against the community, and tried to frame Alice Branning for Michael's murder. In some occasions, she becomes an anti-heroine until she chases chaos again which is back and forth.

The character is portrayed by Charlie Brooks.

At first Janine started out as a troublesome schoolgirl who tricked Frank into getting her things that she wants and getting her out of trouble. By 1999, Janine's mischief has gone unchanged as she clashes with Frank's second wife Peggy Mitchell and causes her relative Jamie Mitchell to lose his virginity. She also shows little support for her brother Ricky Butcher after his marriage with Bianca Jackson ends in despair following her affair with Dan Sullivan whilst he was in a relationship with Bianca's mother Carol Jackson. In 2000, Janine tells Dan that her father has teamed up with Pat's new husband Roy Evans and Peggy's eldest son Phil Mitchell in perpetrating a motor scam. This leads to Dan grassing them up to the police, which causes many situations thanks to Janine.

That same year, however, Janine finds herself addicted to drugs and forced to do prostitution ever since Phil's cousin Billy Mitchell has gotten involved into doing cocaine for his crime boss Steve Owen without the latter's consent. Troubles further arise when Frank leaves the square after his affair with Pat is exposed, and Peggy leaves Janine homeless for her unchanged attitude. This causes a sympathetic resident, Terry Raymond, to allow Janine to move in with him and she becomes a surrogate daughter to him after his last daughter Tiffany died following a disasters marriage with Phil's brother Grant Mitchell. As time goes on, however, Janine starts using Terry to her advantage until he eventually realizes her endgame and leaves the square before she can exploit him any further.

Janine later plans to marry her stepson Barry Evans for his inheritance after hearing his isolation ever since his wife Natalie Evans had an affair with Ricky. Using her manipulation tactics, Janine tricks Barry into viewing her as his only friend and later persuades his best-friend Paul Trueman to help with her plan. Her plot seems to work when Barry finds out that he is supposedly dying. On the day Janine and Barry get married, however, she is appalled to learn from a phone call that Barry isn't dying after all and he has only 40 or 50 years to stay alive. On New Year's Day 2004, Janine finally tells Barry the truth and verbally insults him despite his pleas for them to continue their marriage. Then in a fit of rage Janine pushes Barry off a cliff, killing him as he collapses to the ground and slowly dies while she watches on without helping him. After Barry's funeral, Janine inherits his estate whilst his infant son Jack is left with nothing. Janine's success builds despite Ricky and Natalie all learning the truth about her killing Barry. But despite their efforts, the police are unable to arrest Janine due to lack of evidence. Paul later finds out that Janine killed Barry as well and attempts to attack her after she taunts him about it, but is restrained by Dennis Rickman in the end.

She then proceeds to get revenge on her enemy Laura Beale by reporting her for benefit fraud, before insulting her in front of Pat's gangland boss Andy Hunter - after which their mutual acquaintance Den Watts calls her a "Nasty Piece of Work". Later on, Laura confronts Janine and they fight that ends with Janine strangling Laura and forcing her to leave. Moments later, Pat confronts Janine to put a stop to her treatment of Laura. It is then Janine confesses to Pat that she killed Barry, which causes Pat to brand Janine "evil" before leaving to find Laura dead after falling down the stairs. After Janine mocks Laura's death, Pat decides to implicate her when the police ask her to collaborate with Janine's testimony; she refuses and Janine is still facing a potential imprisonment for causing Laura's death. Janine begs Pat to change her mind, but Pat is determined to get justice for Barry and watches on with many others as Janine gets arrested and taken into prison for Laura's murder. Pat later finds out that Janine has been denied bail when Den's wife Chrissie Watts asks her for news on the matter. In 2005, Janine is released off-screen after Frank convinces Pat to change her testimony.

When Frank dies in 2008, Janine attends his funeral with Ricky and their family before leaving in frustration that she didn't get Frank's inheritance. Thereafter she resolves to marry a Jewish pensioner named David, but fails after Pat exposes the plot and David dies of a heart attack on the day Janine was supposed to marry him. Janine returns to Walford and continues to spark trouble by causing Bianca's adopted daughter Whitney Dean to undergo stress from being abused and groomed by her father figure Tony King. Moreover, her attempts to forge a romantic bond with Lucas Johnson are unsuccessful.

In 2009, Janine ends up killing Danielle Jones in a road accident and is guilt-ridden when it transpires that Danielle was the long-lost daughter of Ronnie Mitchell - to which Ronnie only discovered just moments before Danielle's death. Nonetheless, she continues to feud with the Mitchell Family and later teams up with their villainous patriarch Archie Mitchell to get revenge by swindling the Queen Victoria public house from them. Janine helps by forging a friendship with Archie's niece Sam Mitchell, then sleeps with Ian Beale before blackmailing him into renouncing Phil's loan of the pub by threatening to reveal Ian's two-timing to his wife Jane Beale. By the time Archie has accomplished his revenge, Janine is plotting with her boyfriend Ryan Malloy to con Archie in a get-quick-rich scheme despite Archie proposing marriage to her. It is then on Christmas Day 2009, however, when Archie betrays Janine by throwing her out of her home after revealing that he was using her and was aware of her plan with Ryan to con him. This could have been a motive for Janine that night when Archie is later murdered by an unknown assailant; Janine is a prime suspect during a police investigation on Archie's murder.

In 2010, Janine marries Ryan and they later divorce when she tries to kill him in revenge for his affair with Stacey Slater. Later on Janine gets into a fight with Stacey and her relative Kat Slater that ends with the trio getting arrested with Pat. While spending the night in a cell, Janine is shocked to learn that Stacey had been raped by Archie. Nonetheless they continue to feud and Janine later finds out that Stacey is Archie's murderer and that her late husband Bradley Branning had been found posthumously guilty for the crime. She exposes this in front of everyone and tricks Stacey into attacking her with a knife. Janine calls the police and frames Stacey for attempted murder, but she escapes with the help from Ryan and fellow resident Max Branning.

In 2011, Janine helps Max's daughter Lauren Branning in her quest to stop Whitney from being sexually groomed by her pimp boyfriend Rob Grayson. That year sees Ryan killing Rob before leaving the square. Afterwards in 2012, Janine begins dating Michael Moon and they marry before she later gives birth to their daughter Scarlet. In 2013, Janine and Michael start a custody battle whilst trying to get Scarlet's nanny Alice Branning to take their side against the other. This ends with Michael attempting to kill Janine, only for Alice to stab him in an attempt to stop him. Michael regains consciousness and tries to grab the knife again, but Janine gets it first and stabs him to death with it in self-defense. Janine later frames Alice for killing Michael and attempts to flee the country, but Bianca's father David Wicks learns the truth and unwittingly helps in having the police take Janine into custody. Janine is charged for Michael's murder, but ends up getting acquitted with Alice for the crime in 2014. While everyone is pleased that Alice is proven innocent, Janine finds herself resented by the entire square and ends up leaving with Scarlet to start anew. In her last scene, Janine spots a family and smiles as she contemplates on targeting them for her money-hungry desires once more.

Over the next few years, Janine has trouble with her daughter's upbringing and this results in Scarlet going into several foster care homes - as Sacarlet found out what her mother was really like and thus wanted nothing more to do with her. Eventually she got in touch with her young half-brother Tommy, who is the son of both Michael and Kat respectively. Soon Janine returned to the square to reclaim custody of her daughter, but Kat refused and their feud had resurfaced. In 2022, however, Janine managed to succeed in regaining her daughter's trust and the two reconciled before Scarlet agreed to live with her mother again.

In August 2021 it was announced Charlie Brooks would be returning to EastEnders, seven years after she departed Albert Square on March 20th 2014 after getting away with murdering her ex husband Michael Moon on 1st, November, 2013, after he tried to kidnap her daughter: Scarlett Moon.

Her daughter Scarlett Moon contacts her half-brother Tommy Moon, who is the son of Kat and Michael and wonders if she can live with his mother Kat Slater and him due to her being in foster care because of Janine's neglect of her. Kat Slater accepts Scarlett and wants to adopt her, but on 6th, September, 2021, Janine returns pretending to be a doctor using her name in 2008 when she pretended to be jewish to con a man called David out of his money, Judith Bernstein. 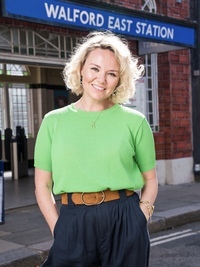 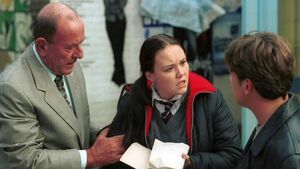 Janine Butcher with her brother Ricky and their father Frank. 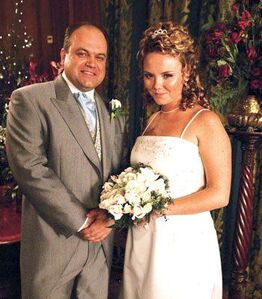 Janine with her first husband and stepbrother Barry Evans. 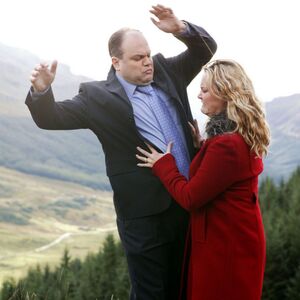 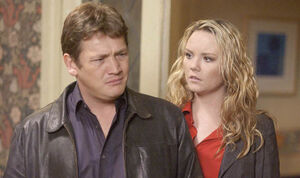 Janine is turned against by her brother Ricky after he learns the truth about her. 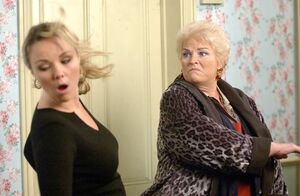 Janine getting slapped by her stepmother and nemesis Pat Harris. 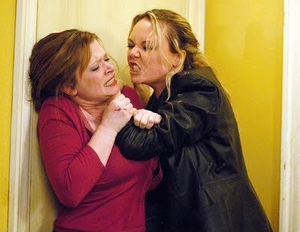 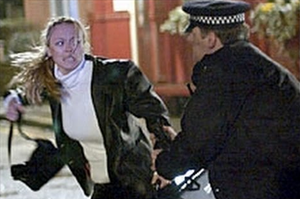 Janine gets wrongfully arrested for Laura's death as she finally gets her comeuppance for Barry's murder. 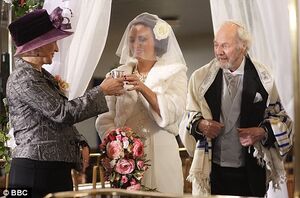 Janine prepares to con a wealthy man named David into marrying her so she could get his fortune. 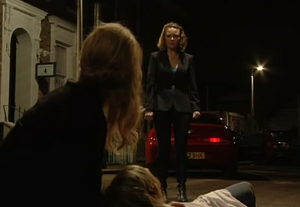 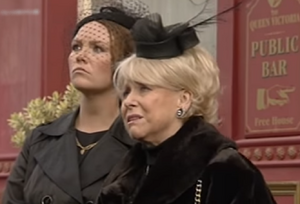 Janine about to clash with her father's ex-wife Peggy Mitchell. 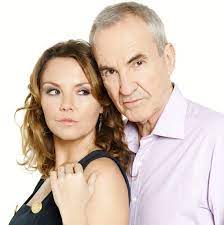 Janine teaming up with Peggy's former spouse Archie Mitchell against his family. 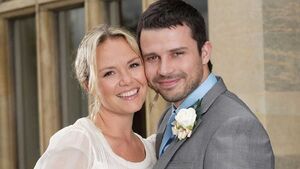 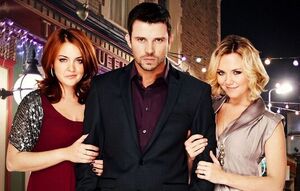 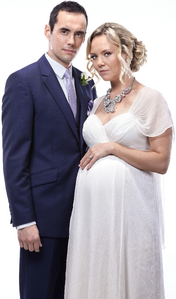 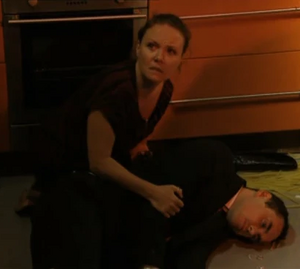 Janine kills Michael following a bitter custody battle between them. 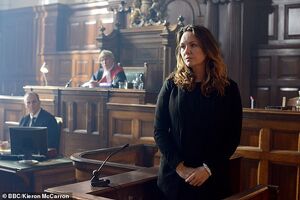 Janine on trial for Michael's murder. 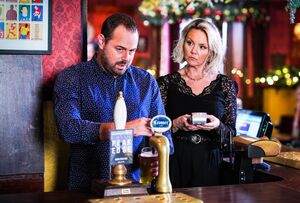 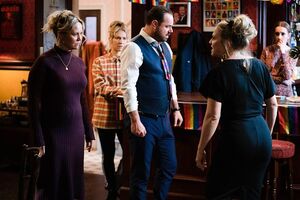 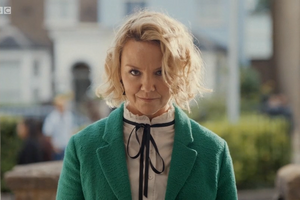