Kill anyone that will not submit to the Mafia.

Abuse of a corpse

The Janitor is one of the evil roles from the mystery RPG game, Town of Salem. It is a janitor who works for the Mafia.

The Janitor chooses a person and if their target is died, the Janitor will clean their body and the target's role will not be revealed in the game. They can be useful in the game, they can clean important people and prevent their resurrection.

The Janitor can become a Mafioso if all Mafia Killing roles are dead.

The Janitor must eliminate the Town, the Coven and the Neutrals (except Survivor, Witch, Pirate, Executioner, Jester, Guardian Angel) to win.

The Janitor has no defense, so it can be killed by any role. 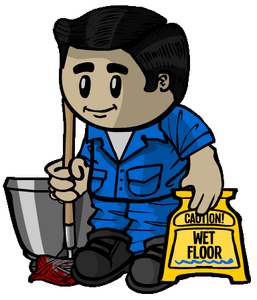 Avatar of the Janitor.

Avatar of the Janitor in the mobile.
Add a photo to this gallery

Retrieved from "https://villains.fandom.com/wiki/Janitor_(Town_of_Salem)?oldid=3822239"
Community content is available under CC-BY-SA unless otherwise noted.