Villains Wiki
Register
Don't have an account?
Sign In
Advertisement
in: Spoilers, Mature, Call of Duty Villains,
and 32 more

Hauptsturmführer of the Nazi Party

Member of the Waffen-SS

Hauptsturmführer Jannick Richter is the secondary antagonist of the 2021 video game Call of Duty: Vanguard. He is a Nazi officer in the Waffen-SS who is tasked by Hermann Freisinger with interrogating Task Force Vanguard, and learns of Freisinger's secret project before being killed by Arthur Kingsley to avenge Richard Webb's death.

He is voiced by Dominic Monaghan in his first villainous role.

Not much is known about Ricther's past, but that he was born in Germany and became a member of the Nazi Party and Waffen-SS under the leadership of Adolf Hitler. According to Arthur Kingsley, Richter was an "office rat" since he had no combat medals on his uniform, but would reach the rank of captain by 1945.

Richter is first seen when Task Force Vanguard was imprisoned at Berlin after captured by Wehrmacht, he starts questioning with the commanding officer Arthur Kingsley, who is planning to manipulate the officer to escape once he's done with him. Richter then reports to his superior Freisinger, about "Project Phoenix" and the sixth man of the team (Novak, who is killed by Freisinger in the first mission) is dead, yet Freisinger didn't buy it and orders Richter to get more information from the team.

Richter then questions Polina Petrova, and tortured her, yet she tricks him to reporting to Freisinger, knowing that is something worth talking about. Richter calls the army to get the records from the Nazi commander Leo Steiner (who is killed by Polina) and to get confirmation of the sixth Ally is dead, Freisinger entered the office and showed a document of an American arrested at Tempelhof, for attempted to steal a plane. Freisinger is enraged at Richter for being tricked by the prisoners, and made him to interrogate the "American" or he will get rid of him. Richter start questioning Wade Jackson, whom he thinks is the sixth man, but to no avail.

Richter told Kingsley that he lied, with the latter responded only knowing that he is dead, Richter then shot and killed Richard Webb, Kingsley's sergeant before leaving. As the officer is about enter Freisinger's office, Richter overheard and saw several Nazi officers being taken away and executed, Freisinger informed him that Hitler killed himself, and Richter thinks that the war is lost. In the final act, Freisinger planned to get rid of Richter for being non-essential, but Richter then promises to get what he need in a short time.

Richter went back to interrogate Polina, who reveals that Freisinger recruited Steiner for Project Phoenix. He then went to fetch Lucas Riggs and took him to the interrogation room, not before finding a pile of corpses at there. After questioning Riggs, the paranoid Richter told him it was never about winning the war, instead, for a coup, realizing Freisinger's plans to usurp Hitler to become the new Führer. When Wade's explosive went off, Riggs then captured Richter, revealing Kingsley's plan to have Lucas feign cooperation to escape from the Gestapo. When confronted by the team, Ricther pleaded with them, but Kingsley mortally wounded the officer, stabbing him in the clavicle with Polina's knife. The team then left their cells to stop Freisinger from escaping to Tempelhof, leaving Richter to die from his wound. 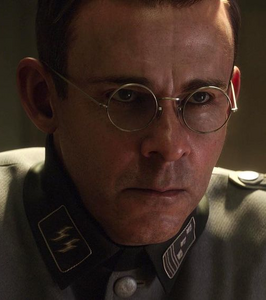 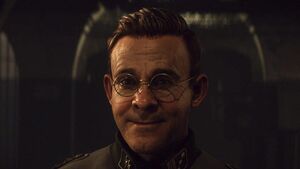 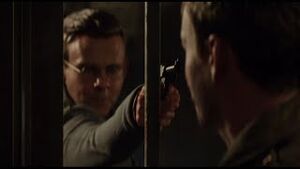