Prince of the Other World
Prince Janos
Father (by Ananzi)

Kill Final and retrieve the heart of his father.
Conquer both worlds (all succeeded).

Janos, also known as The Prince is the main antagonist of the indie fighting game The Black Heart.

He is the ruthless monarch of a dimension known as The Other World, position that he took after murdering his own father, The King. Using the humongous powers emanating from his father's heart, Janos seeks to conquer all dimensions through war and bloodshed, and is willing to sacrifice everything in his will to fulfill his means.

Janos' past is a complete mystery. The only thing that is known is that he was the son of The King of the Other World, a dimension that exists apart from ours and is presumed to be a replica of our world placed in medieval times. The King was a powerful being that ruled his land with peace and tranquility, a land that was once a wasteland until he turned it into the perfect world thanks to his tremendous powers. One day, he had Janos with an unknown mother, and raised him with love and care. However, young Janos was the exact opposite of what his father used to be. He saw all the peace as repulsive and that his father didn't use his powers for what he thought it would be more fitting: Conquering everything.

He grew with hatred against his father until his last days, where he was just an old decrepit with neither half of the strength he had before. Taking advantage of this, Janos decides to fulfill his greatest desire: Kill him, and steal his powers by ripping his heart with his own hands.

With the power of the King stored in his heart, Janos attempted to use it against everything and control all dimensions in existence. However, he wasn't aware that he was being watched by an extremely powerful, ancient being called Final. Knowing that the power of the King was powerful enough to threaten all dimensions (including his home dimension, The Chaos) Final steals the heart and returns to the Chaos, with the hopes that it will never reach Janos' hands. Angered, and taking advantage of usurping his father's throne, Janos declares war on his homeland and turns his world in an unlivable, hazardous wasteland, completely soaked in the blood of the innocents that made the rivers, vegetation and even the sky turn in a scarlet red. He framed Final for the death of The King and made a crusade to find the heart at any mean possible. At one point, Janos discovered a race of serpentine monsters called Shar-Makai , born in the same Chaos Final was from, and brainwashed them to turn them into his personal army. His quest to find the heart would have more repercussions to our world that he would have believed.

The Daughter of the Prince

From all the stories of the 6 playable characters in the game, only Shar-Makai's and Ananzi's story were directly related to Janos. Ananzi was one of his daughters, the most beautiful among them as well as the most powerful. She had hatred against Final and everything out of the Chaos, because she believed Final to be the responsible of her grandfather's death. Ananzi could not believe that her father would use so repulsive beings to be the ones to have the honor of killing Final, and she requests her father to send her instead. Janos accepts, with the condition that if Ananzi gets the heart, he would have to get rid of the Shar-Makais.

After defeating the other characters, Ananzi reaches Final and both engage in an epic battle, which resulted in Final's defeat. Ready to kill him, Ananzi tells him that was the pain her grandfather passed through when he ripped the heart out of his chest. Final, amazed by the girl's naivety, tells her that she was being used by the one she loved the most: Her father. Not believing any word that he says, Ananzi tells him that he was asking for a slow death, having the guts to insult her father. That's were Final uses his powers to show her the cruel truth: How her beloved father pierces through her grandfather's chest with his own hands, with a heart between his bloodstained fingers. Final tells her that no matters what she does to him or what he does to her, at the end Janos wins, she fulfilled a purpose and she was going to be disposed off just like The King. Not believing what she had in front of her eyes, Ananzi enters in shock and gets killed by Janos, that materializes behind her with an army of Shar-Makais. With Final weakened, she outlived all of her usefulness for her father.

It is later revealed that Janos' planned to use her daughter as a mere tool to find and weaken Final, so he could give the finishing blow with his Shar-Makais. Janos tried to give Final the ironic end of being killed by his own siblings that he brainwashed, but he underestimated Final's strength. Even after attacking with his army of Shar-Makais, Final slaughtered most of them until he finally succumbs to his wounds. Weakened, Final argues with Janos about how he was a control freak that had a good life but wasted it just to control it all, and that he wasn't worth of his father's powers. Janos realized that the Black Heart wasn't stored in Final himself since its powers could potentially kill him, so he swallowed it. He tries to make a bargaint with Final: If he gave up the heart, he would let him live. Instead of surrendering, Final takes one last ditch effort in killing his arch-nemesis: Using his own powers, he controls the resting Shar-Makais and awakens them from Janos' mind control. He succeeds, and all of the Shar-Makais start to crawl and attack Janos, piercing his flesh with their enormous teeth. However, this was not enough to take down the Prince, as he uses his enormous strength to send a gigantic blow that kills alls the Shar-Makais, and then pierces Final's stomach to finally get his father's heart. Final uses his last words to tell him that there were forces in the human world that could stop him, but Janos is willing to take the challenge, as he was now a god.

This chapter is only available in The Black Heart: 10 Years Edition (Steam re-release of the game) where his story is given an expansion and a slightly different ending.

Here it's seen that the King of the Other World had a brother with similar powers as his: The creator of the human world. They both parted ages ago to create each a world of their own. The young Janos studied both of them for years and learned that both stored tremendous powers inside of their bodies. In a lust for power, he decided that he had to make those powers his. He traveled to the human world to find his uncle: A decrepit old man that lived isolated in the woods, in order to kill him and steal his skin. He managed to kill him, but he lost one of his eyes in the battle. He took off the skin of his uncle (which was made of light) and wore it, transforming in a sinister cloak made of shadows that gave him enormous powers. He understood that world creators just like his uncle had powerful weapons in their bodies, in the case of his father, it was his heart. He studied it enough in order to control it, and when the moment came, he killed the King and ripped his heart out of his chest.

Just like the original game, this is the moment where the plot begins: The power emanating from the heart start to make negative effects in other worlds. This of course, attracts the presence of Final, who fights with Janos and steals the heart in an attempt to save the fate of every dimension in existence.

Some changes have been made to Chapter 5 and Chapter 6. Final helps Ananzi in dodging Janos attack, saving her life. Knowing the truth about her father, Ananzi puts on Final's side and attacks him. She manages to hurt him, but she ends up with grievous wounds. Thinking that she died, Janos sends his army of Shar-Makais to finish up his archenemy, but just like in the original game, this was not enough. Final awakens his brothers from their mind control and they start to bite Janos, but he uses his dark powers to create shadow blades that kill all the Shar-Makais and pierce through Final's flesh. Both end up in really weakened states, but Final takes the chance to grab him by the neck and attempts to strike the finishing blow.

This ends up being a fatal mistake, as Janos can control the heart when he is too close to it. The heart starts to violently emerge from Final's mouth, but before it has the chance to reach Janos' hands, Ananzi gains enough strength to wake up and kills her father in the same way he killed her grandfather: By ripping his heart. Final points out that he had exhausted the powers of the Black Heart, it is not beating anymore. Janos closes his eye as he sees her daughter crushing his own heart with her hands.

However, before dying, he notices that the heart still has power in it, and then uses it to restore his own health. Both Ananzi and Final try to stop him but it proves to be impossible, as the heart is constantly replenishing his health and giving him strength. Tired and defeated, they had no options anymore. Janos finally gets the heart, which ends up replacing his own. He has the chance to finally get rid of his archenemy in the worst way possible: He learned that the bodies of both his father and his uncle were protected against Chaos beings, reason why Final couldn't unleash the powers of the heart. Knowing that his cloak of shadows is made of his uncle's skin, he imbues Final with it, slowly burning him and finally turning him into stone, killing him. Ananzi tries to understand her father's actions, but he only replies with a swift death for giving him trouble. The game ends with Janos looking at the horizon, planning his conquer of other worlds and dimensions.

A ruthless, cruel, charismatic, manipulative, and monstrous being that has no love or respect for any kind of life, Janos is shown to be archetype of the Dark Lord, with the sole love of power being his only motivations. Janos is a complete control freak that desires to have everything for himself, and has no problems in sacrificing everything in his will to get what he wants, including his own blood.

Before having the heart, and not having neither half of the strength that Final or his father had, Janos still had a thatt his hand a set of powerful skills such as: 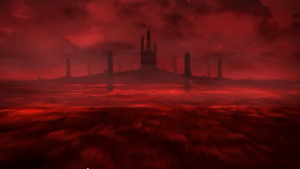 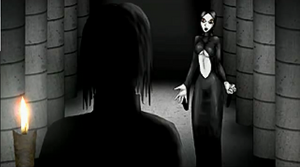 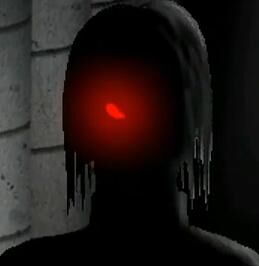 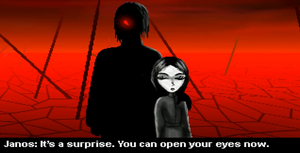 Janos win in the original game.

Janos before losing his eye.

Janos gets his cloak of shadows.

Janos makes the deal with Ananzi. 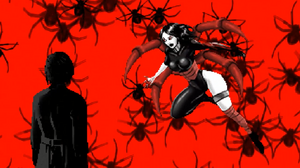 Janos is attacked by Ananzi. 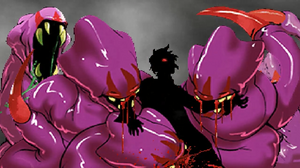 Janos is attacked by the Shar-Makais. 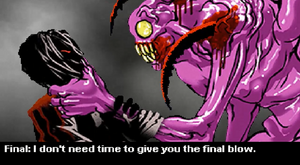 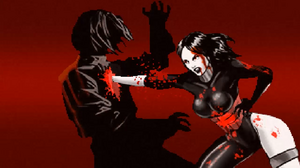 Ananzi gains strength to rip her father's heart out. 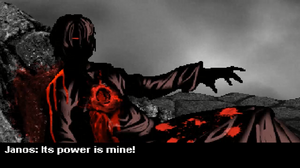 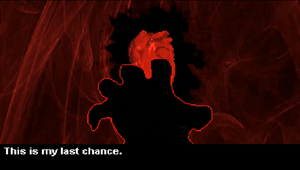 Janos restores himself with the Black Heart.

Janos kills Final in this version. 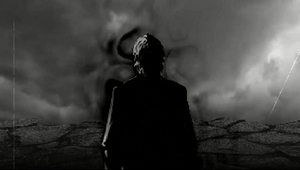 Janos last screen, representing his victory in this version. 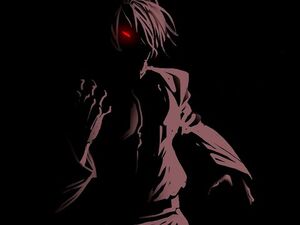 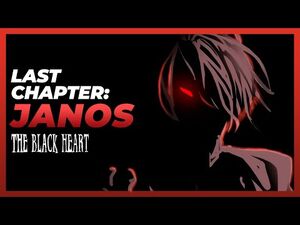