Commander of the City Watch of King's Landing (formerly)
Lord of Harrenhal (formerly, lost his seat)
Officer of the Night's Watch

Janos Slynt is a character from A Song of Ice and Fire and Game of Thrones. He was the head of House Slynt and commander of the City Watch before he was later stripped of Harrenhal and sent with the outcasts of the Night's Watch. He was the son of a butcher and has one unnamed daughter and three living sons in King's Landing: Morros, Jothos, and Danos.

In the TV series, he was portrayed by Dominic Carter.

Slynt was captain of the Iron Gate and was raised to Commander of the City Watch of King's Landing, the "gold cloaks", after the death of the previous commander, Manly Stokeworth (died during the sack of King's Landing).

Janos was known for taking bribes and selling positions and promotions. By the end of his tenure, over half the officers were paying him part of their salaries. Jon Arryn discovered this and had two men who were willing to come forward to testify against Janos, but both were found dead a short time later. Despite this, Arryn still wished for Slynt to be dismissed but Robert Baratheon refused. Stannis Baratheon thinks Robert listened to Petyr Baelish and the crown profited from the corruption of the City Watch.

Years later Eddard Stark helps Janos to keep order in the capital, and later after King Robert Baratheon has been injured by a boar during a hunt in the kingswood, Lord Eddard plans to proclaim Stannis Baratheon as the new king once Robert has died, implying a likely confrontation with Queen Cersei, who wants to install her son Joffrey to the Iron Throne instead. Given the strength of the Lannister force commanded by Cersei, Eddard sees the loyalty of the City Watch as crucial to the success of his plan, so he contacts Baelish, who promises him to buy the loyalty of Slynt and his men for six thousand gold pieces (this was a mistake as Littlefinger suggested Ned to have the loyalty of Lord Yohn Royce, who was in King's Landing at the time).

During the confrontation with Joffrey and the Queen Regent, Slynt and his men betray Eddard Stark and kill his men. After that he was rewarded with Harrenhal and made Lord head of House Slynt, much to the disdain of Tywin Lannister

Janos has also been given a place in the small council. He was worried about the influx of peasants in the city. He oversees the massacre of all of the late King Robert Baratheon's bastard children. In the show version he personally murders the baby Barra (book version has Allar Deem doing it) and interrogates Tobho Mott about the whereabouts of Gendry. He is later stripped of Harrenhal and sent to join the Night's Watch by Tyrion along with the men he has suggested as replacements for him as Commander of the City Watch. He is replaced by Ser Jacelyn Bywater, though Tyrion believes that in getting rid of Slynt for Bywater, he has merely replaced a man loyal to Littlefinger with one loyal to Varys. In the show version Tyrion has Bronn to replace Janos Slynt instead of Ser Jacelyn.

Not knowing that Renly is already dead, Bowen Marsh of the Night's Watch sends an appeal to the five kings, in which he asks them to send men to defend the Wall and the realm against an expected attack by Mance Rayder's wildlings. He also tells them about the possible death of Lord Commander Mormont during the Great Ranging. When Grand Maester Pycelle informs Lord Tywin Lannister about the letter, the Hand of the King is annoyed about the neutrality the Night's Watch keeps in the War of the Five Kings and suggests that no help will be sent until a Lannister ally has been installed as new Lord Commander and brings discipline back to the Wall. Janos arrives at Castle Black and allies himself with Ser Alliser Thorne and Ser Glendon Hewett. He tries to have Jon Snow executed for treason but fails thanks to Maester Aemon. In the show he hoped that Jon would have died fighting the mutineers at Craster's Keep led by Karl Tanner.

During the Battle of Castle Black Janos, having no true leadership experience, breaks down and flees to hide during the battle.

In the book version Janos is candidate for new Lord Commander, while in the show he supports Alliser Thorne. To avoid Slynt undermining his authority with his scheming, to separate him from his ally, Alliser Thorne, and in view of his experience, Jon Snow, now Lord Commander of the Night's Watch, decides to give Slynt command of the abandoned way castle Greyguard. Still under the misapprehension that Jon's youth and inexperience give him license to do as he pleases, Slynt refuses to follow Jon's orders, doing so the second time publicly. At this point, Jon, sick of Slynt's insubordination and knowing either imprisoning Slynt or forcing him to go would only cause further problems, orders that Slynt should be taken to the top of the Wall and hanged, though Slynt remains arrogantly confident that Jon would not go through with the execution, threatening them all with Tywin Lannister's retribution if Jon harms him, unaware that with Tywin's death, he is making empty threats. However, Jon ultimately decides to follow the moral code that Eddard Stark had set his sons, and orders his men to fetch a chopping block so Jon can carry out the beheading himself, under the laws of the First Men his father had followed: namely 'The man who passes the sentence should swing the sword.' With his head on the block, Slynt begs for mercy and says he will obey Jon's orders, but Jon thinks "No. You closed that door", though Jon is merciful and kills Slynt quickly. Stannis Baratheon, who watches the execution, approves of Jon's behavior. 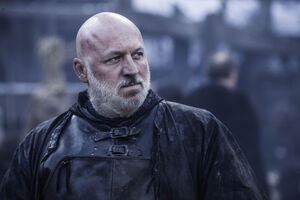 Janos as a Night's Watch officer.
Add a photo to this gallery

Retrieved from "https://villains.fandom.com/wiki/Janos_Slynt?oldid=4173078"
Community content is available under CC-BY-SA unless otherwise noted.