Plunge the world into chaos.

Achieve his dream of world domination.

Guardia de Mieux, also called Jaquio or The Jaquio, is a power-hungry sorcerer and the main antagonist in both Ninja Gaiden and Ninja Gaiden II: The Dark Sword of Chaos.

Jaquio is a bizarre sorcerer with purple skin dressed in a red torn tunic with a hexagram embroidered on the front and a purple skeleton of a demon wrapped in his body like armor. A bunch of eyes is attached around his body. In the TurbografX-16 / PC Engine version, he has tremendous faces with a suffering expression around the helmet on his head.

After Walter Smith, a professor, and acquaintance of Ken Hayabusa, seals off an ancient ruin in South America, Jacqui under the alias of Guardia de Mieux appears and takes control of the ruin. Jaquio awaits Ryu Hayabusa after he sends one of his assassins, the Malice Four to steal the Demon Statue break the seal on the Dark God, plunging the world into darkness.

After the Malice Four steal the Shadow Statue from Ryu's father, Joe Hayabusa, Jaquio tricks Ryu into surrendering the Light statue while he prepares the ritual in front of the Demon's body in an Amazon temple. He succeeds in breaking the seal on the demon but is defeated by Ryu and the Dragon Sword.

After Ashtar who was Jaquio's master all along behind the events of the first game, is defeated by the Dragon Ninja Ryu, Jaquio reveals himself somehow fully resurrected. He takes Irene hostage and grievously wounds the US Army agent, Robert T. Sturgeon. He soon meets Ryu in a demonic altar, and reveals that the energy of the spirit of the Demon flowed into his body after their last battle, resurrecting him, and giving him unfathomable evil power. Despite his powers, he is beaten by Ryu. However, his blood flowing out touches the cursed blade of the Sword of Chaos, and it sucks the life out of Irene.

The gates of Hell are thrown open and the revived Jaquio takes on the form of a demon. He challenges Ryu, and is once again defeated by the Dragon Ninja. After his defeat, the Sword of Chaos is destroyed and the Hell Gate is sealed, as the castle collapses. 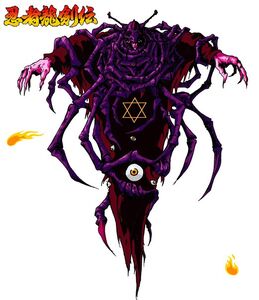